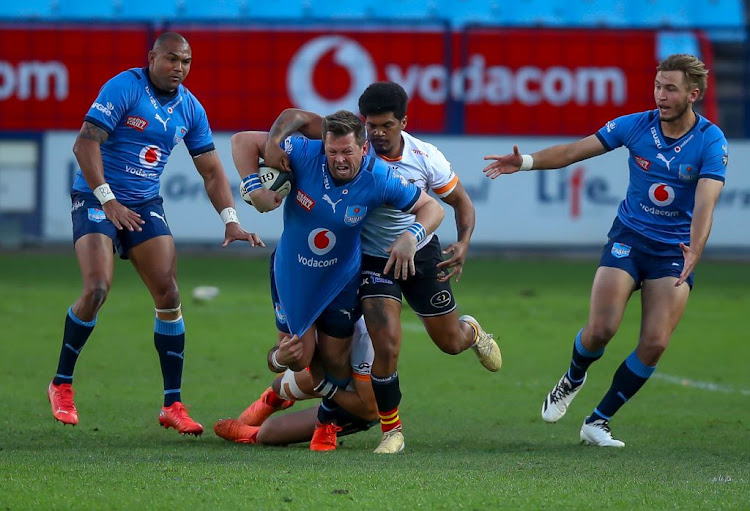 Ruan Combrink of the Blue Bulls is tackled by Ruan Pienaar (c) of the Free State Cheetahs during the Currie Cup match between the two sides at Loftus Versfeld on August 28, 2021 in Pretoria
Image: Gordon Arons/Gallo Images

Bulls coach Jake White is hoping that the experience of winning the Currie Cup last year will put them in good stead during the tournament's knockout stages in the next two weeks as they attempt to defend their trophy.

The Pretoria side secured a home semifinal against Western Province after beating the Cheetahs on Saturday and should they get past the Cape Town visitors this week, a win would confirm a final at Loftus against the winner of the other tie between the Sharks and the Griquas.

“I would like to believe that the experience of winning the Currie Cup last year is going to count in our favour because we have been there and done it,” White said after they ended the round robin stages with a 39-36 win over the Cheetahs at Loftus on Saturday.

“But you must also understand that sometimes in sport if you haven’t won it, you probably have the burning desire to win it, and that may be the mentality of the opposition.

“The challenge for me and the rest of the coaching group is to make sure that in the next two weeks we are still alive and we control our destiny. As you say, hopefully we have gained from the experiences of having played in those games last year.

“That will be the most positive thing for us. I said to the players after the match that whatever happened during the pool stages is irrelevant. What matters now is what is going to happen in the next two weeks of the semis, and possibly in the final.

“That’s where we are going to be judged and we have to happy that we possibly have two home games where we can control our destiny. We have to be happy about the experience of the couple of guys who have won the Currie Cup [as this]will help the group that hasn’t.”

Though they did not play to the best of their ability in the win over the Cheetahs on Saturday, White said they achieved their mission of qualifying for a home semifinal.

“The bottom line is that we needed to get a home semifinal. We needed to win this last pool match against the Cheetahs and we have done that, and now our destiny is in our own hands.

“I don’t think it was only the defence that was not at its best against the Cheetahs. It was  the ability to adapt and as the game unfolded, I was just thinking that Arno Botha is probably nine years older than some of the players in the back. He is the only player over 25 in that back and he got sent off for ten minutes.

“When he went to the bin, you are left with all these youngsters on the field without their captain. You are not going to get things the way you want them but it is a bit of a development stage.

“I don’t think it’s a red light. I don’t think we need to worry about it but at the same time we have to fix it because it is not about the next two weeks.

“It is about going to Europe and if we don’t understand that teams will be good enough to exploit those weaknesses, then we are going to get results like we got [on Saturday].”

SA Rugby has confirmed that the eagerly anticipated United Rugby Championships (URC) will kick off next month.
Sport
3 months ago

Western Province sneaked into the semi-final stage of the Currie Cup where they will visit the Bulls at Loftus on Saturday.
Sport
3 months ago

Fit again Cheetahs utility forward Oupa Mohoje has not yet given up on returning to the Springboks.
Sport
3 months ago