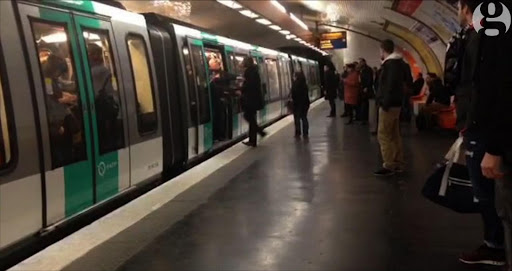 A video grab taken from footage obtained from Guardian News & Media Ltd in the United Kingdom on February 18, 2015 shows Chelsea football fans packed onto a Paris Metro train pushing a passenger to prevent him from boarding the carriage at a station in Paris on February 17, 2015. Chelsea Football Club said on February 18 it was prepared to ban self-proclaimed racist fans who were filmed preventing a black man from boarding a Paris subway train, saying their behaviour was "abhorrent".
Image: AFP

British Transport Police have confirmed they have identified all seven men who are being investigated for racist chanting at a mainline station following a Chelsea Champions League football match earlier this month.

The Police said the seven men would be interviewed in due course, according to the Daily Mail, after they had released images of them taken at St Pancras International station in London at around 8pm on February 18.

In a statement on Wednesday, solicitor John Kaye, who has been engaged by Chelsea fan Jamie Fairbairn, 23, said his client had accepted being among those in the carriage of the Metro train in Paris during the incident involving a black man, Souleymane Sylla, on the evening of February 17.

“On behalf of Mr Fairbairn, I have been in contact with the Metropolitan Police to offer Mr Fairbairn's assistance as a witness,” Mr Kaye said.