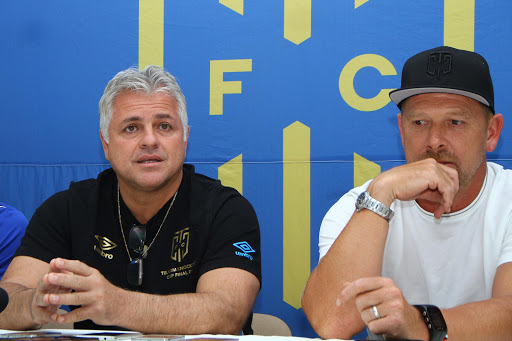 Cape Town City owner John Comitis has joined his coach Eric Tinkler in slamming Pitso Mosimane and accused him of dirty tricks in making an approach to Aubrey Ngoma in a hard-hitting statement issued on Wednesday that could lead to a formal charge against the Mamelodi Sundowns coach.

Tinkler blasted Mosimane when he told reporters on Tuesday that Mosimane was trying to tap up City players and now his chairman has come out with all guns blazing.

The Cape Town club are furious at efforts to prise away one of their star players but the tone of their statement is unusually direct and offers the opportunity for the Premier Soccer League to charge Mosimane for an offence that is widespread across the league but almost always ignored.

“The current coach of Sundowns‚ Pitso Mosimane - who understands the FIFA rules - has made a direct approach to our contracted player‚ Aubrey Ngoma offering him hypothetical millions to join Sundowns next year‚” claimed Comitis.

“This phone call and deal was made directly to Aubrey outside the window‚ days before our crucial away match with Maritzburg.

"This is in serious contravention of the FIFA rules governing player transfers as no player can be directly approached whilst in contract with another club.

“This tactic from Sundowns is a poor reflection of their brand and how they operate in order to advantage themselves and destabilize other clubs‚ especially considering that we are competing in a title race‚” he added.

“This is the South African Premier League‚ not the Sundowns Wishlist League.

"They must remember that their achievements last year mean that they do not only represent themselves‚ but the credibility of our country and continent in the world of football.

"We are trying to show that we are the best run league in Africa and there is no need for them to deal in the way that they do - football does not have to be a dirty game.

“This attitude of ‘Let me take your best player and you can have 3 mediocre expensive players’ is laughable.

"And then you wonder why you’re battling relegation the following season.

"For us‚ Aubrey holds that value and selling him now is of no interest to me – he is in my plans for next season and has three years left on his contract.

"A bag of money cannot play on the left-wing‚ but Aubrey can.

"I don’t need the money‚ I need quality footballers‚ and at the moment that is what I have.

“Would they give me (Percy) Tau?

"Would they give me (Khama) Billiat? No. But for some reason they have an arrogance to believe they are entitled to everyone else’s best players.

"Maybe they now believe they are above South Africa? Who knows.

"But one thing is for sure‚ if I was interested in Tau – which I am – I will get out my pen‚ write up an offer and send it respectfully to (Sundowns owner) Patrice (Motsepe).

"I do not call the player directly. And I do not offer him hypothetical money.

"Why‚ because the player is contracted to Sundowns and it is how proper football clubs should operate.

"After that they can decide if they will sell him to me or not‚ but that I will deal with after the season has ended‚ during the window.”

Comitis also accused Mosimane of damaging his club’s title chances although Ngoma was suspended for Tuesday’s loss at SuperSport United‚ which effectively ended any hopes of a title in the maiden seaason of the new Cape Town club.

“In the middle of the title race‚ (with) five games to go‚ they call my player directly and attempt to destabilize my club.

"They further implicate themselves by offering stupid sums of hypothetical money that they may or may not actually want to pay‚ but the damage is done.

“I have a player that is supposed to be focusing on the Maritzburg away game and instead he’s receiving calls from Pitso about money.

"This completely contravenes FIFA‚ SAFA‚ and PSL rules of practice and while other clubs may accept this degrading method‚ I will not.

"My front door is never closed‚ everyone has my number‚ they know where to reach me.

“With the (Keegan) Dolly transfer saga I had given them the benefit of the doubt‚ but now more than ever I am convinced that this is simply the way Mamelodi Sundowns operate.

"This method of back door phone calls and its associated practices have no place in a league that is trying to be the best in Africa.

"If we want to become credible on the global stage‚ if we want to bring public interest back to our game and stadiums – it starts at the top.

"We need to respect our own game‚” Comitis concluded.