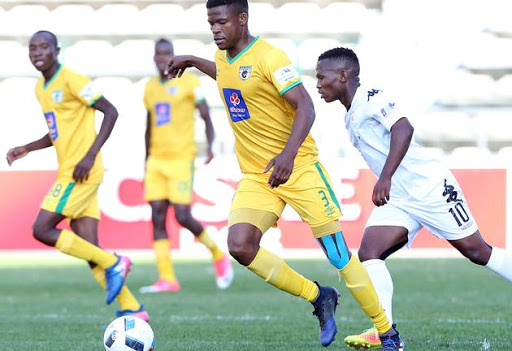 Nzwanele Mahashe of Baroka FC during the Absa Premiership promotional play off match against Stellenbosch FC at Athlone Stadium on May 31, 2017 in Cape Town, South Africa.
Image: Carl Fourie/Gallo Images

Baroka FC departed the Mother City on Thursday after a week down in the Cape with a sense of disappointment after missing out on victory over Stellenbosch FC in the opening game of the Premier Soccer League’s promotion-relegation playoffs.

The 2-2 draw at Athlone Stadium on Wednesday completed a seven-day stay in the city‚ starting with victory over Ajax Cape Town last Saturday when they avoided immediate relegation.

But while Bakgaga remained unbeaten in Cape Town in four matches this campaign‚ they felt it might have turned out better against an obviously inferior Stellenbosch side.

“In the first half‚ we played and created a few chances that we could have capitalised on but in the second half‚ we were nowhere‚ even if we did score a second goal‚” said Baroka co-coach Kgoloko Thobejane.

“But anyway‚ one point going forward is very important – it is better than nothing. We just have to make sure that going to second game we can get the three points.”

Baroka now have a seven-day wait until they meet Black Leopards at home in their next playoff game.

“As always‚ we are happy with time to prepare – it’s enough time and we can correct the mistakes that happened against Stellenbosch.

“We struggled to read the height of the ball‚ couldn’t anticipate and didn’t go with the runner so we can now work on correcting those.”

Baroka might have been hampered by the quick turnover between Saturday’s last match of the regular campaign and Wednesday’s opening playoff game‚ while Stellenbosch had a full fortnight’s rest after the conclusion of the National First Division.

But Thobejane felt it was more of a positive to go into the game match ready rather than being idle on the sidelines for two weeks‚ not able to keep up match sharpness even if playing friendlies.

“Players perform better with matches in their legs‚” he added.