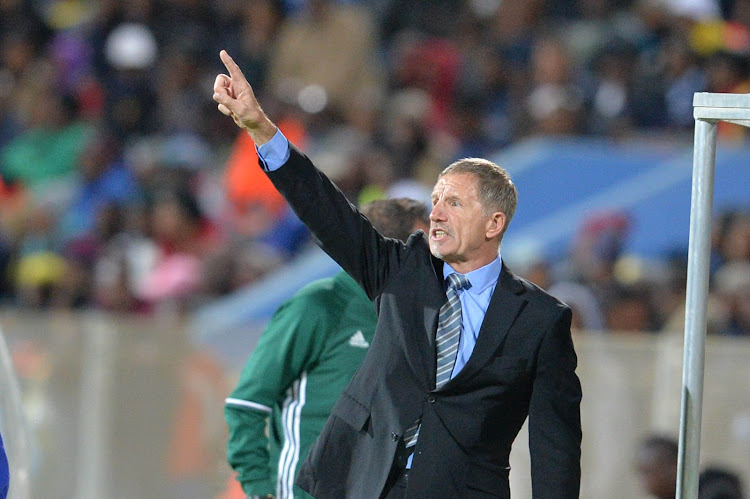 Outgoing SuperSport United coach Stuart Baxter gave an analysis of the team he leaves behind that should scare the club's competitors.

Despite wining the Nedbank Cup in emphatic style in the 4-1 thrashing of Orlando Pirates‚ reaching the final of the Telkom Knockout‚ going on a 19-game unbeaten run in the league and starring at qualifying for the quarterfinals of the Caf Confederation Cup – Baxter feels that this SuperSport side can still improve.

“In every area that we have worked on‚ they can improve‚” Baxter said. “You never stand still in life. You either improve or get worse.

If they stand still‚ everybody will be chasing them‚ they will get closer and pass them. You’ve got to keep moving forward. I think that turning a good season into a great season‚ you have to win things.

They did that. We were on a great run (in the league)‚ playing well and then suddenly we hit a wall with a lot of injuries. I know that it sounds like excuses‚ but playing in the continent and domestically took a toll on us.

Baxter continued‚ “We had 17 fit players at one stage and that was an enormous burden. People like Yeye (Reneilwe Letsholonyane)‚ who started the season on fire and finished the season on fire‚ had a little patch where he really needed a rest if we had a bigger squad. That little patch was enough to drop points and lose a little bit of confidence and by the time we got it back we were in fifth place.

It could have been fourth in the last game but the energy wasn’t in the tank…I certainly think that they can be better. Individuals are coming back into form. There is a lot more to come from the lads.”

Those words should excite Eric Tinkler who replaces Baxter next month. Baxter will now fully concentrate on leading Bafana Bafana on a permanent basis. The British coach will take an experimental Bafana team to the Cosafa Cup‚ starting in the quarterfinals in Rustenburg on Sunday.

In just over a year‚ Baxter took over a struggling Matsatsantsa a Pitori side and turned them into a formidable force – winning the Nedbank Cup back-to-back against Orlando Pirates.

“My father‚ God bless him‚ was the coach at Aston Villa‚” Baxter said. “I grew up at Aston Villa watching him work and when I got into coaching he used talk very harshly to me‚ saying that I wasn’t good enough and I shouldn’t be easily satisfied but keep working. He said to me when you leave a football club and you can turn and ask the chairman‚ did I earn every penny that you paid me and if the answer is yes‚ you’ve done okay.

I would like to ask the chairman (Khulu Sibiya)‚ did I earn the money that you paid me? And if he says yes then I am happy. That’s how I would like to be remembered (at SuperSport).”