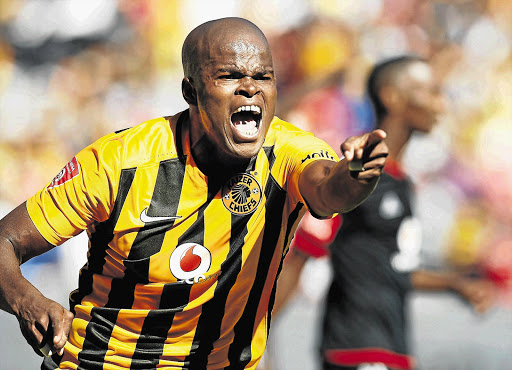 The fact that Kaizer Chiefs midfielder Willard Katsande has reached 200 matches for the club doesn’t mean he will stop listening to advice‚ even from those who tell him when he plays “nonsense”.

Katsande‚ 31‚ reached a double century in Amakhosi colours in Chiefs’s 2-0 win over Cape Town City in midweek and is set to add one more when they take on Bidvest Wits at FNB Stadium tomorrow (6pm).

In fact‚ “Salt and Vinegar”‚ as the hard-tackling midfielder is known‚ didn’t have the best of starts when he made his debut for the club six years ago.

Not only did Katsande play poorly after replacing Siphiwe Tshabalala in the MTN8 final in September 2011‚ but Chiefs lost the match 1-0 against their bitter rivals Orlando Pirates at FNB Stadium in Johannesburg.

After that match‚ his countryman Method Mwanjali‚ who was playing for Mamelodi Sundowns at the time‚ gave him a call and in a harsh tone‚ told Katsande he could have done better.

“If it’s a genuine negative (comment)‚ it helps you grow. I remember the game I played against Pirates (in 2011) and Method told me‚ ‘Baba‚ what you have done today is nonsense’.

“And that was my first game. Imagine if I was a short tempered guy‚” Katsande said this week.

“I worked on myself‚ because I also knew it wasn’t a good game for me.”

Katsande is in constant contact with Chiefs legend Tinashe Nengomasha‚ who also hails from Zimbabwe and has given him a lot of advice‚ especially because the “General” played in the same defensive midfield position.

They were due to meet for lunch on Friday before the player headed for camp.

“Even if a kid tells me I have to take two steps to the side‚ obviously I would listen because the game is improving everyday‚” Katsande said.

On his early Chiefs days‚ it did not help that Katsande was a relatively unknown at the time when Chiefs signed him from Ajax Cape Town‚ where he had been deemed surplus to requirements.

Nor that Katsande’s roughhouse game of over-the-top challenges needed some refinement before he could become a classy defensive midfielder who could stay on the right side of the referee’s whistle.

Football fans used to mock Chiefs by saying it was a case of “buy one‚ get one free” whenever the club brought in players from Zimbabwe.

“I came here (from Ajax) and all the fans didn’t know about me. They were on (football manager) Bobby Motaung’s case until I proved my worth‚” he recalled.

Katsande may be on the wrong side of 30‚ but he feels he still has a long way to go in the game. He has won two league titles‚ the MTN8 and Nedbank Cup with the Phefeni Glamour Boys.

“Before I retire‚ I need to win as many trophies as I can with Chiefs to be counted as a legend here‚” he said.