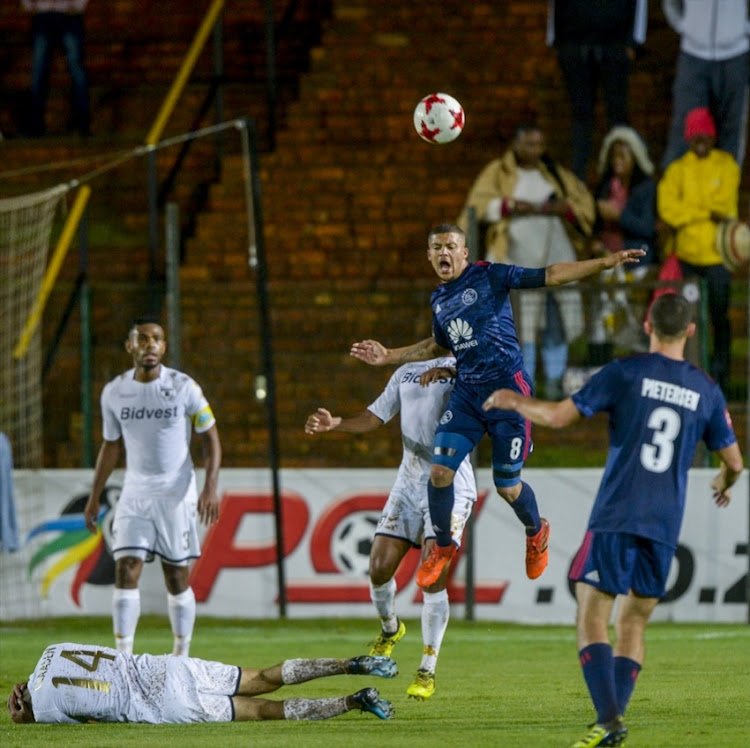 If Bidvest Wits cannot beat a team as poor as this current Ajax Cape Town at home - regardless of the adverse conditions - they deserve to remain rooted to the bottom of the table.

The champions remained in last place with a miserly 10 points from 12 games as they dropped more winnable points at home crankily labouring to Wednesday night's 0-0 Absa Premiership draw against Ajax at Bidvest Stadium.

On a miserable, drenched night, on a pitch that became more difficult under foot as the game wore on, this could always be a tough game to watch.

Ajax looked like a decently-drilled Ajax Amsterdam under-19 team, and if the parent club are indeed grooming Stanley Menzo as a future youth coach in Holland, he’s doing well.

Wits resembled an old man getting out of a bath – ungainly and not pretty to look at.

The league champions, despite their Telkom Knockout victory on the weekend, remain far from their flowing best, and last night’s conditions were never going to help that situation.

Coach Gavin Hunt also looked to use the opportunity against stragglers who came into the game just two places above Wits’ last, and notoriously poor travellers at that, to try to give some of his recent injured list some valuable game time.

Gabadinho Mhango started and looked rusty. Daylon Claasen continued to look as unconvincing as he has all season. Ben Motswari was the most convincing of the recent absentees in central midfield.

Wits clearly had the superior player class and pedigree. They put together the most constructive football on such a slippery, trying surface.

Mhango curled one past the right upright early on. Vincent Pule found space but only managed a shot straight at Jody February.

In a rare chance for Ajax Tashreeq Morris’s skidding shot was well held by Darren Keet, falling to his left.

Against an Ajax team this poor and obviously beatable Wits needed the three points to begin mounting a challenge on a still not impossible, but certainly increasingly unlikely, defence of their title.

At the break Hunt brought on in-form midfield dynamo Thabang Monare for Claasen. Daine Klate for a limping Pule followed soon after.

But the chances had dried up, and in the 70th Hunt replaced Mhango with Keene, asking the striker to slot in next to Amr Gamal, and trying the two big men up-front together in the wet.

And Wits should have had the winner within five minutes of that change, Reeve Frosler’s ball across the face finding Gamal just needing the tap-in, the Egyptian somehow missing the target.