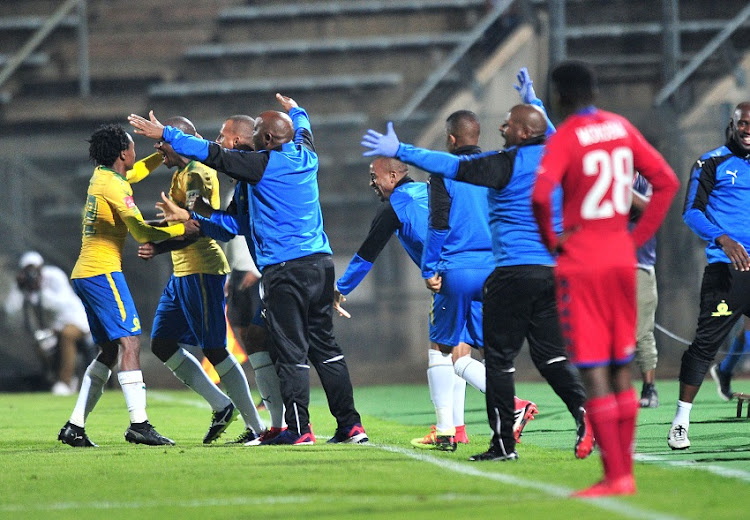 Despite it having appeared possible at one stage, it is far from a foregone conclusion that Mamelodi Sundowns will run away with the 2017-18 Absa Premiership.

And now, with Kaizer Chiefs, Orlando Pirates, Maritzburg United and Free State breathing down the Brazilians’ neck, the league is truly open.

Thabo Mnyamane, in the 11th minute, took advantage for SuperSport’s opener of one of many occasions where Downs, for some reason uncharacteristically trying to play offside in defence, were caught square or confused.

Sundowns struggled to find a solution to a SuperSport who sat deep, but could produce a lightning counter when the opportunity was presented.

A bit of deception from a free-kick finally did set up Percy Tau for 79th-minute equaliser.

SuperSport, enjoying a mini-recovery from a torrid second half of 2017-18 to sit in 10th coming into the game, were unashamedly defensively laid out by coach Eric Tinkler.

Forwards Mnyamane and Evans Rusike made for two out-and-out attacking players as Matsatsantsa were clearly set up to sit and wait for the counterattack.

Downs might have had an early opener. Khama Billiat’s volley was touched on by Thapelo Morena, making for a good save from Ronwen Williams.

If SuperSport were looking to catch Downs, they did, and not just on the break but napping too.

From Boateng’s route one kick Mnyamane was left a tennis court to run into down the left, finishing calmly and low past Denis Onyango.

Downs could have bounced straight back, Billiat doing the hard work to beat Gould down the left and square, Tau miscuing with the goal open.

With SuperSport parking the space ship Enterprise, Downs had to go through their well-worn routine of trying to pry open such a tactic.

They did not find it easy. Tebogo Langerman’s chip before the break found Themba Zwane free, his header meeting another athletic stop by Williams.

From the change rooms Sundowns notably stepped up the tempo, and also brought on Sibusiso Vilakazi for a limping Khama Billiat.

Vilakazi shot across the face and Gaston Sirino struck a free-kick onto the right upright.

But SuperSport still had that eye for the counter. An Itumeleng Khune-esque kick from goal by Williams released dangerous Rusike to hold off Motjeka Madisha and sublimely curl an attempted finish past Onyango, but onto the upright, the rebound dribbling across the goal-line.
Downs cleverly equalised.

From a free-kick Hlompo Kekana impressed with his acting skills feigning to line up a shot, but chipped instead, finding Tau to trap, make space and finally beat Williams.