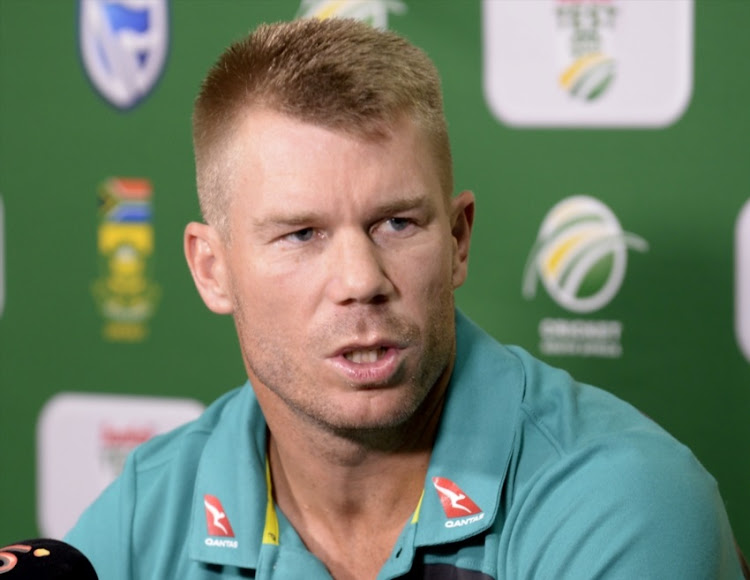 David Warner of Australia during day 1 of the 1st Sunfoil Test match between South Africa and Australia at Sahara Stadium Kingsmead on March 01, 2018 in Durban.
Image: Lee Warren/Gallo Images

South Africans held the Warnergate moral high ground until Friday‚ when they relinquished it to a mob of misogynists wearing cardboard cutout masks and carrying songbooks smeared with lyrics as lewd as they were lame.

The yob mob turned up at St George’s Park on the first morning of the second test between South Africa and Australia.

What their aim was wasn’t clear. Whatever it was went unattained — not a line of their songs was heard and most wore their masks on top of or behind their heads.

The masks featured the face of Sonny Bill Williams‚ whose name was in the lyrics.

If you don’t know why a New Zealand rugby player should make waves at a cricket match between South Africa and Australia‚ you probably also don’t know that David Warner is under fire for his verbal attack on Quinton de Kock during the first test at Kingsmead.

Warner launched his tirade after De Kock apparently made a derogatory comment about the Australian’s wife‚ which was triggered by hours of abuse directed at De Kock on the field.

De Kock shouldn’t have said what he allegedly said‚ but he was clearly provoked. And he said whatever he said quietly enough for only those closest to him to hear him.

Still not up to speed? In 2007 an Australian ironwoman star‚ Candice Falzon‚ engaged in what the tabloids enthusiastically dubbed a “tacky toilet tryst” with Williams. Falzon married Warner in 2015.

Ah. You can see clearly now‚ and the picture is as ugly as you imagine.

As if being married to one of the most unnecessarily aggressive men in sport wasn’t challenging enough‚ Warner’s wife has become the main victim of what he started.

Those South Africans who have shown themselves to be no better than Warner by trying to engage with him on his own pitiful level — perhaps they‚ like him‚ know no other way — disgrace all of us along with themselves.

What does their clumsy idiocy say about a South Africa in which women are routinely abused in every which way?

That‚ to them‚ rape and the sickening culture it breeds and is fed by is not a problem?

Did any of them know that Thursday‚ when they carefully prepared their masks and their songbooks‚ was International Women’s Day?

Do they understand why what they have done would‚ in a better world‚ offend everybody and not only David Warner?

Do they care that Candice Warner had nothing to do with what happened at Kingsmead?

Do they get that what they have done is stupid and embarrassing and not at all funny?

Good on them. They must be so proud.