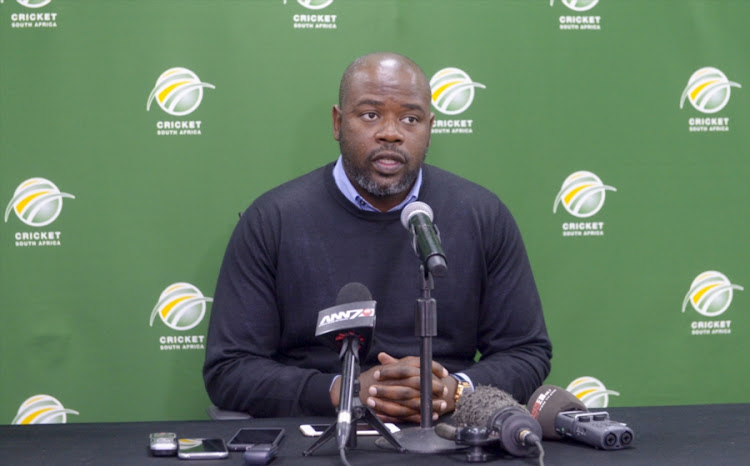 Cricket SA acting chief executive Thabang Moroe and his management team will be galled at the thought that a bunch of Canadians helped by Cricket West Indies‚ which is anything but an efficient‚ well-run organisation‚ seem set to pull off what CSA have so far failed to do.
Image: Sydney Seshibedi/Gallo Images

The Global League T20 (GLT20) starts on June 28 and will involve many of the usual suspects — among them David Miller and Wayne Parnell — and the less usual — players like Rassie van der Dussen and Christiaan Jonker — and Tom Moody‚ Phil Simmons and Waqar Younis head up coaching staffs.

Even Chris Gayle‚ whose unabashed misogyny has cost him his gig in the Big Bash League‚ gets a game.

That hasn’t made nearly as many eyebrows shoot up as the fact that admitted ball-tamperers David Warner and Steve Smith will also be in action‚ nevermind that their offence is trifling compared to Gayle’s.

The season officially ended in a blaze of gilt and glamour at Cricket South Africa’s (CSA) awards in Johannesburg on Saturday‚ but several unresolved ...
Sport
4 years ago

If that makes the cretins want to dust off their Candice Warner face masks and lurch to places like Newlands and St George’s Park‚ they should crawl back under their rocks.

The GLT20 is not the T20 Global League (T20GL) — the tournament that was supposed to catapult South African cricket into the brave‚ no longer so new world of the travelling filthy-rich short-format circus.

Instead it cost Haroon Lorgat his job as Cricket South Africa’s (CSA) chief executive and CSA itself R180-million in losses‚ and was postponed for a year and may never see the floodlights of day/night.

That said the two events are easily confused‚ not least because what was eventually billed as CSA’s T20GL started out being called the GLT20.

“GLT20 was the project name we used while finalising the name‚” a source close to the process said on Wednesday.

“And then‚ having sat down as a group‚ and consulted with marketing experts‚ and taken into account what fans said‚ the name ‘T20 Global League’ resonated and presented itself as a more credible option than a gimmicky name.”

There is something endearing about a bunch of suits sitting around trying to ungimmick the unshakably gimmicky concept of a T20 league.

But they would no doubt have done a double take to see something called the GLT20 take firm form‚ and more so because it will be played in Canada‚ land of ice-hockey‚ maple syrup and expats who have a thing for frozen wastes.

SA Cricketer of the year Kagiso “KG” Rabada is targeting the outgoing series to Sri Lanka next month to make his return from the injury that ruled ...
Sport
4 years ago

The Edmonton Royals‚ Montreal Tigers‚ Toronto Nationals‚ Vancouver Knights and Winnipeg Hawks will be joined by as yet unnamed franchise of players drawn exclusively from the Caribbean: Cricket West Indies (CWI) are associates to the GLT20.

They will play 22 matches‚ all of them at the Maple Leaf Cricket Club‚ a dedicated cricket ground north of Toronto‚ culminating in the final on July 15.

“There is a robust club system [in Canada] and the game is being played in school‚” tournament director Jason Harper told website Firstpost in May.

“The clubs are growing day-by-day and there are over 15 000 registered cricketers.

“There is an opportunity for growth in the existing framework‚ and by adding GLT20 it should help growing interest for the game more in Canada.”

Proteas fast bowler Kagiso “KG” Rabada stole the show at the Cricket South Africa (CSA) awards in Sandton on Saturday night when he walked away with ...
Sport
4 years ago

South Africans must be galled at the thought that a bunch of Canadians helped by CWI‚ which is anything but an efficient‚ well-run organisation‚ seem set to pull off what CSA have so far failed to do.

There is a mitigating factor in that one Canadian dollar will buy R9.90‚ but that pales next to the reality that a country where cricket is what baseball is in South Africa can gets its act together faster and with more certainty.

CSA are reportedly close to deciding whether to proceed with their plan to stage what can surely no longer be called the T20GL.

South African administrators have earned‚ properly‚ a reputation for being able to get stuff done.

Get this done and that reputation won’t need burnishing for a long time.