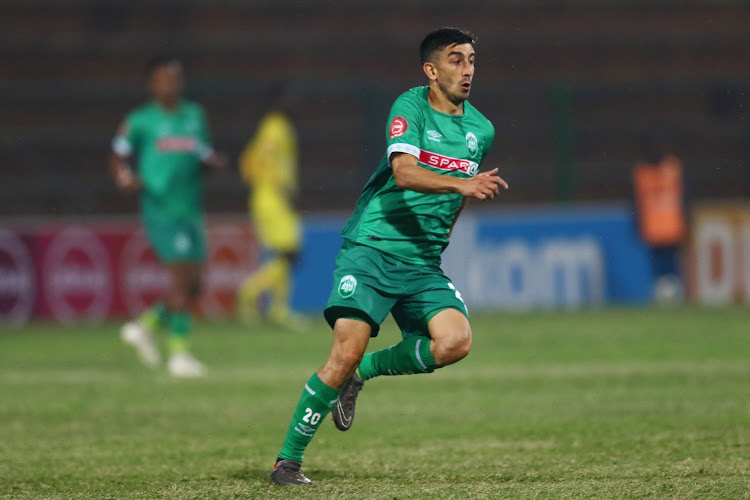 Argentine striker Emiliano Tade could well turn out to be a secret weapon for AmaZulu as coach Cavin Johnson shows more confidence in the ability of the former Club World Cup regular.

The 30-year-old has slowly been making his mark at Usuthu and got his third goal of the season on Tuesday against Cape Town City in his team’s 2-0 Telkom Knockout first round win.

Tade has now started six games for AmaZulu after coach Cavin Johnson gave him time to get used to the fast tempo of the Premier Soccer League after he arrived from New Zealand‚ where he had spent the last seven years playing for Auckland City.

“He’s getting the hang of it. We knew his ability when we brought him‚” said the coach‚ whose side are heading south to the Cape on Friday for Saturday night’s Absa Premiership match against City at Cape Town Stadium (kickoff 8.15pm).

“You don’t score 50 goals for nothing. Yes‚ maybe he was playing in a much less physical league than the PSL but when you have the finesse and the calmness it doesn’t matter what league you play in‚ you can always find the net‚” Johnson said on the Argentine.

“That’s what we brought Emiliano here for because he has that. He is able to see [opportunities] a lot quicker than other players. Hopefully he will get a lot more chances like he’s done in the past.

“He got kicked about a bit by City on Tuesday but he’s an Argentinian‚” added Johnson. “Argentines are born hard!”

Tade played for Auckland City at seven Fifa Club World Cups from 2011 to 2017‚ including their shock third-place finish four years ago.

Johnson is hoping there might be a combination blossoming with Bonginkosi Ntuli‚ who was also on Tuesday’s scoresheet against City.

“Bongs has always been a good player‚ he’s always fighting and he puts in the effort. When the opportunity arises‚ and he’s able to get it onto the right foot‚ or steal a goal‚ then he does that for you.

“That’s what you want from someone like him‚” the AmaZulu boss added.