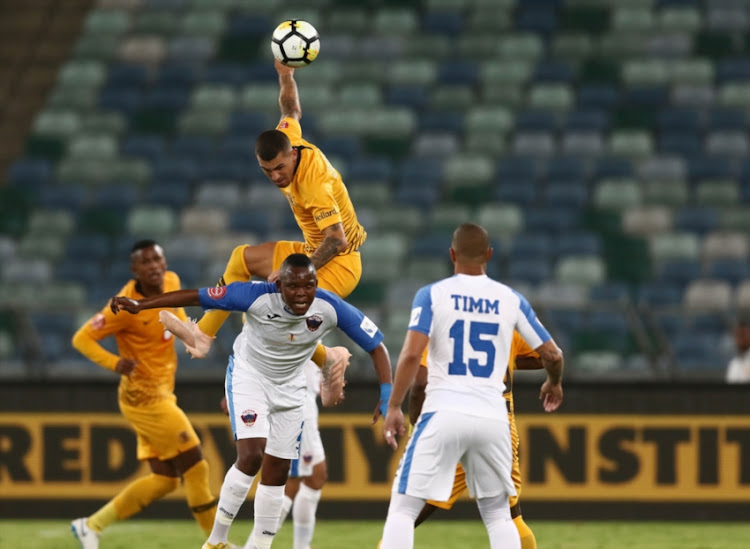 In the end Kaizer Chiefs escaped with a point from their second Absa Premiership game behind closed doors at Moses Mabhida Stadium on Saturday evening, but Chippa United could justifiably feel hard done-by with a 0-0 scoreline.

Chiefs were never relishing this second and final game in KwaZulu-Natal behind closed doors – part of the sentence for last season's pitch invasion by their fans that followed Amakhosi's 2-0 Nedbank Cup semifinal defeat against Free State Stars at Moses Mabhida.

Their previous game in an empty Mabhida had ended in a 1-0 defeat against Polokwane City on October 6.

Amakhosi's players this week openly admitted they were not looking forward to another.

Even with the excuse of lacking their normally vocal support, though, this was not a night that Chiefs, or their coach, Giovanni Solinas, will look back on with any fondness.

Any side worth its salt that has a hunger for trophies – as Chiefs surely must have because, well, they're Chiefs – must be able to overcome any adverse conditions.

Amakhosi showed hardly any stomach for their odious task. If anything it was goalkeeper and captain Itumeleng Khune who often kept his team in the game as Eric Tinkler’s far more lively Chippa manufactured the greater proportion of chances.

In front of the deafening silence of an empty stadium, it was a predictably flat first half in which Chippa perhaps shaded play.

The Chili Boys had the first half-chance as Khune had to come out of his area to take an attempt by Thabo Rakhale in his chest. Ruzaigh Gamildien chipped the loose ball at goal, where Mario Booysen cleared off the line.

Chippa had a better opportunity when right-back Zita Macheke broke from deep in his half, then fed Kurt Lentjies through to square for Lerato Manzini alone and with space in front of goal, who mis-hit a weak shot at Khune.

Chiefs' best chance of the half came two minutes before its end, Pule Ekstein teeing up George Maluleka on the edge of the box who struck powerfully to force a save by Daniel Akpeyi.

Chippa grew in strength in the second half. They should have opened the scoring in the opening 10 minutes of it, Chiefs defender Siyabonga Ngezana denying the Port Elizabeth team twice.

Gamildien intercepted in midfield and played Rakhale down the left, Ngezana recovering for a last-ditch challenge at the former Orlando Pirates midfielder's feet.

From the resultant corner big Burundian centre-back Frederic Nsabiyumva got up to glance a header at the near post, this time Ngezana getting the clearing header off the goalline.

Influential Gamildien was again provider of a clever throughpass, this time for Manzini, who squeezed a shot that forced Khune into a sharp stop.

Soon after Tinkler replaced Manzini with bigger namesake Rhulani Manzini. Stranger, though, was when Chippa's coach took off Gamildien for Mark Mayambela.

Defender Boikanyo Komane's swerving drive was kept out at full stretch by Khune.