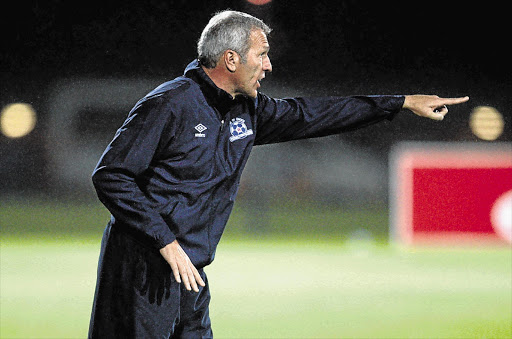 Twitter came alive with excitement after the departure of Kaizer Chiefs coach Giovanni Solinas was announced on Friday, December 7 2018. But the joy quickly fizzled out when fans were introduced, or rather reintroduced, to his replacement.

Solinas joined Chiefs in July, but didn’t gain favour with supporters as the team was kicked out of two cup competitions and failed to impress in league games.

His dismissal comes after Chiefs lost three of their last four matches.

Within an hour of Kaizer Chiefs sensationally announcing they had “parted ways” with coach Giovanni Solinas‚ social media was on fire with the news.
Sport
3 years ago

The outgoing coach leaves at the same time as his assistant, Patrick Mabedi.

The team thanked Mabedi for “all the efforts during his time at Kaizer Chiefs” and wished him well.

Shortly after the exit of Solinas and Mabedi started trending on social media, Chiefs tweeted another bombshell - that Ernst Middendorp was returning to coach the troubled team.

“We were looking for a coach who is experienced and who has an understanding of the club’s footballing culture,” commented Kaizer Motaung.

The targeted assistant coach will be announced soon. Arthur Zwane will assist Middendorp for the upcoming three games.#HailTheChief pic.twitter.com/FPRM4IIKF7

When Middendorp led the Chiefs coaching department in 2006, he earned himself the nickname 'Middendraw' after the team's 14-draw run.

Twelve years later, those draws are still fresh in the minds of Amakhosi faithfuls and they are not too excited about 'Middendraw's' comeback.

Fans think the family-run team could have made a better choice.

There goes my excitement 😰 pic.twitter.com/wpOSmobdvS

I think this family lost it y mara they always choose looses mara i give up now suka pic.twitter.com/eZDZQNNpK3

I was hoping we would go for Rudolf Kroll Eish pic.twitter.com/eoFLEkAlAB

When we were kings and when this family respected us. 😢😢😢😢 pic.twitter.com/nHF2OpSZsT

Kaizer Chiefs take on SuperSport United on Wednesday, December 12 2018, at the Mbombela Stadium. And Middendorp desperately needs a win to get into the fans’ good books.