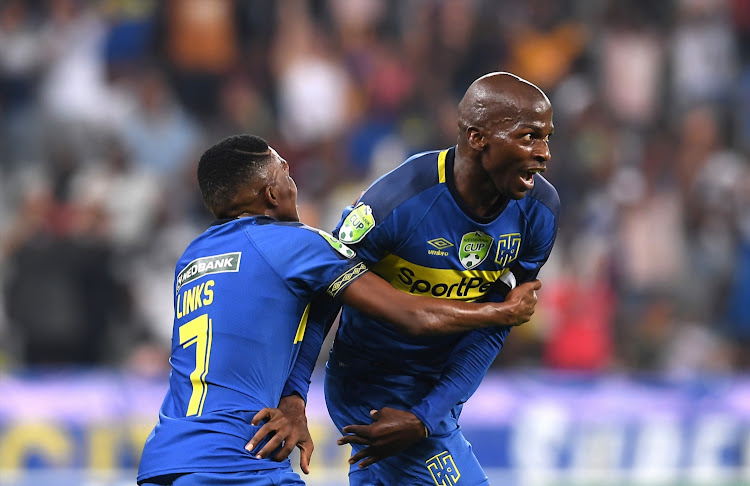 Thato Mokeke scored a rare goal against his former side as Cape Town City claimed a deserved 2-0 victory over SuperSport United to advance to the Last 16 of the Nedbank Cup at the Cape Town Stadium on Saturday.

City once again underlined their quality with what turned out to be a comfortable win against a side that had tasted Nedbank Cup glory in two of the last three years.

Coach Benni McCarthy is building a formidable footballing side that was able to pick apart SuperSport almost at will at times, and were it not for some fine saves from visiting goalkeeper Ronwen Williams, the scoreline would have been a rout.

It was the fourth time City have got the better of SuperSport this season, which includes victory on penalties in the MTN8 final in September.

Matsatsantsa have now lost three of their four games in 2019, unwanted pressure for their coach Kaitano Tembo in what is rapidly turning into a disappointing campaign.

City were missing their midfield anchors Thabo Nodada and Roland Putsche, but that meant a first start of the year for veteran Teko Modise. Matthew Rusike was also preferred up front for the rested top-scorer Siphelele Mthembu.

Leopards win shoot-out to knock Pirates out of Nedbank Cup

The back-breaking baggage of close to five seasons now without a trophy for Orlando Pirates will not be offloaded in this season's Nedbank Cup, after ...
Sport
2 years ago

SuperSport chose to start with Thabo Mnyamane up front ahead of Lungu Ghampani as their only change from the team that beat Bloemfontein Celtic in their previous match.

There were few opportunities in the opening 20 minutes as Gift Links fired a free-kick from a tight angle in the side-netting and Kwanda Mngonyama made a timely block to deny SuperSport’s Teboho Mokoena a shot on goal when he found space at the back post.

Rusike was caught on his heels when Links played a delicious ball across the six-yard box, the striker failing to anticipate the quality delivery from his teammate.

The Zimbabwe international then missed a header from Zukile Kewuti’s cross, and as the all fell to Thami Mkhize at the back-post, his effort was deflected wide.

Rusike stung the palms of Williams in the SuperSport goal with a fierce drive and from the resulting corner, the home side led.

Mokeke headed home Ayanda Patosi’s set-piece as he rose highest, a poor goal for the visitors to concede and one that drew no celebration from the scorer out of respect for his former team.

Rescuers ended their search on Thursday for the plane carrying Premier League soccer player Emiliano Sala, which disappeared over the English Channel ...
Sport
2 years ago

It was a first goal in four-and-a-half years since Mokeke netted for SuperSport against Bloemfontein Celtic, and just the second goal of his career.

City had an excellent chance to extend their lead five minutes into the second half when Patosi’s superb through-ball found the pacey Craig Martin, but he was denied one-on-one by Williams as he also appeared to be held back as he raced towards goal.

But the dominant home side did score their second when Mkhize burst into the box and drilled the ball home for a rare goal from the right-back.

City should have been further ahead when Rusike had time and space at the back post, but saw his effort saved by Williams, while at the other end City goalkeeper Peter Leeuwenburgh denied Aubrey Modiba with a low stop.

Zambian defender Billy Mutale was fortunate to receive only a yellow card when he hauled down Rusike as the last defender after a brilliant pass from substitute Kermit Erasmus, referee Victor Hlungwane adjudging there had been cover.

City were able to hold their advantage to the end and having already won the MTN8 title this season, will be among the favourites to lift the Nedbank Cup, especially with heavyweights Mamelodi Sundowns, Orlando Pirates and SuperSport all having bowed out on Saturday.