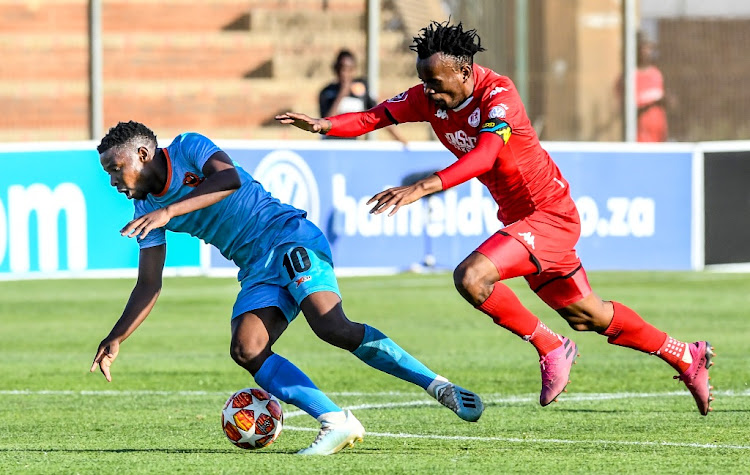 Highlands Park are riding the crest of wave and they are quietly making a name for themselves as one of the toughest teams to face in the Absa premiership.

Coach Owen da Gama's charges put up an impressive shift against the more fancied Polokwane City after beating the visitors 2-0 at Makhulong Stadium on Sunday afternoon.

The victory was the perfect confidence booster ahead of Highlands' appearance in the MTN8 final against SuperSport United in Orlando on October 5.

The home side beat the self same Polokwane team via a penalty shootout last week here in Tembisa to book their place in the R8m cup final.

Da Gama fielded his strongest starting eleven despite a potentially energy-sapping cup final in just five days and was rewarded for his bravery with a victory.

He had newly signed midfield maestro Reneilwe Letsholonyane on the bench but did not use him.

Following a period of sustained pressure from the home side‚ Mothobi Mvala scored his first goal of the season midway through the first half.

Highlands Park have developed a reputation as the hardest running team of the Premier Soccer League but Lamontville Golden Arrows showed similarly ...
Sport
2 years ago

Peter Shalulile‚ who could have easily grabbed a first half hat-trick had it not been for his wastefulness in front of goal‚ put the final nail in City's coffin with a goal of his own on the stroke of full time.

He capitalized on a slick counter-attacking move as City threw caution to the wind by sending numbers forward in search of a late equaliser.

Mvala benefited from one of Ryan Rae's long throw-ins‚ getting at end of a Shalulile flick to volley home a thunderbolt into the roof of the net from close range.

For Highlands‚ with Rae with the ball in his hands and wearing eye-catching gloves‚ a throw-in is like a set-piece for them.

The win will wet the appetite of the Lions of the North ahead of their maiden appearance in a final.