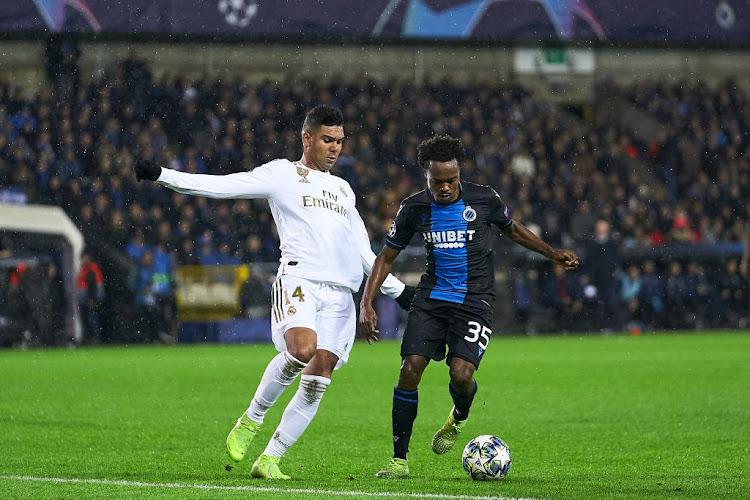 Percy Tau made an eventful return to UEFA Champions League action with his Belgian side Club Brugge on Wednesday, but there would be no dream goal against Real Madrid as he was denied by a stunning save in a 3-1 defeat.

Tau had not been used in the previous two Champions League matches, his last start coming in the 5-0 loss to Paris St Germain in October.

But he was given a run against Real and very nearly gave his side the lead inside the opening 10 minutes as he turned the ball towards goal from six yards, but saw his effort brilliantly stopped by goalkeeper Alphonse Areola.

He would have become just the second South African to score against Real after Bennet Mnguni in 2002.

Tau was influential in the first half and looked to have set up Nigerian striker Emmanuel Dennis for the opener with a brilliant back-heel into the path of the forward, who found the back of the net.

But the Bafana Bafana striker had strayed narrowly offside as he received the ball and the Video Assistant Referee ruled out the strike.

Tau was withdrawn on the hour-mark with the score at 1-1, and Bruges went on to lose as Real’s class shone through.

But the European adventure is far from over for the Belgian side, their third place in the group means they will play in the UEFA Europa League knockout stages.

Brugge will be unseeded in the round of 32, meaning they could come up against the likes of Manchester United, Inter Milan, Ajax Amsterdam, Roma, Arsenal or Sevilla.

The draw for the next stage will be held on Monday, with the two legs to be played in February 2020.

Pitso Mosimane finds another rough diamond: 'He reminds me of how Percy came up'

Skilful forward Sphelele Mkhulise is clearly the next rough diamond project Mamelodi Sundowns coach Pitso Mosimane has taken on to polish and ...
Sport
2 years ago

Percy Tau will go into Thursday’s 2021 Africa Cup of Nations qualifier against Ghana with nine goals in 23 appearances for Bafana Bafana‚ and on the ...
Sport
2 years ago

The trio of top stars who missed Bafana Bafana’s 2-1 friendly win over Mali are all now back in action‚ providing a significant boost for coach ...
Sport
2 years ago