Banyana breeze past Eswatini and into Cosafa semi-finals 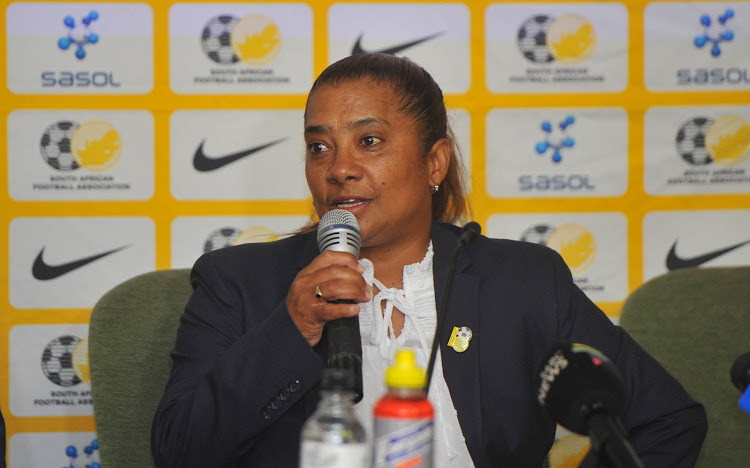 Banyana Banyana head coach Desiree Ellis addresses the media to announce her squad that will travel to Japan for a friendly match.
Image: Sydney Mahlangu/ BackpagePix

Banyana Banyana clinched their place in the 2020 Cosafa Women's Championship semi-finals breezing past Eswatini 4-0 at Wolfson Stadium in Ibhayi‚ just outside Port Elizabeth‚ on Friday.

The South Africans‚ after their opening 2-0 win against Angola as the same venue on Tuesday‚ outclassed Eswatini with from a brace from Nomvula Kgoale and strikes by Sibulele Holweni and Gabriela Salgado.

They camped in the Eswatini half for the entire opening 45 minutes‚ where a lack of a final pass saw the South Africans not quite convert their teritorial advantage to chances as much as they could have. But they took a healthy two-goal advantage to the break.

SA opened the scoring in the third minute. Nomvula Kgoale's low strike from outside the area on the left bobbled across the bumpy surface and seemed to beat goalkeeper Nokwanda Mamba too easily.

Mamba‚ in the 37th‚ came out of her goalmouth to try to collect a miscued shot at the goalline on the right but was beaten to the ball by striker Hildah Magaia‚ who crossed to find Sibulele Holweni to head into the exposed goal.

Banyana began the second half in a virtual facismile of the first‚ this time Gabriela Salgado striking almost from the restart to make it 3-0 in the 46th.

On the hour‚ receiving a pass on the left‚ Kgoale struck a curling‚ first-time effort from a tough angle that beat poorly positioned Mamba at hear near post.

Aftyer the fourth goal Eswatini managed to solidify their lines and make things tougher for Banyana‚ preventing a bigger scoreline.

Banyana earned a free-kick just outside the area deep in injury time‚ which Salgado struck past the flailing arms of Mamba into the top-right corner.