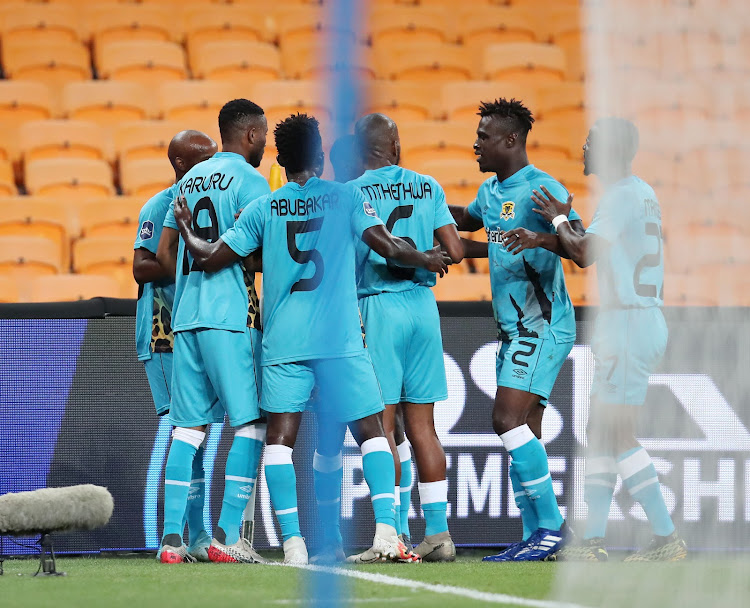 Black Leopards raced to a 2-0 lead at the half time break but let it slip in the second half to share the spoils with Kaizer Chiefs.
Image: Muzi Ntombela/BackpagePix

Faced with the macabre spectre of conceding a first loss in five years against Black Leopards, Kaizer Chiefs fought back from two goals down to snare a 2-all draw at the FNB Stadium.

Had they lost, Chiefs would have dropped to 14th place and looked like it could happen after Ovidy Karuru, a much-maligned former player, snared an early brace.

Chiefs though staged a gradual rear-guard that earned them a point, but kept them in 12th place while Leopards remain in 15th place.

Karuru’s brace, depending on who you support, was either the stuff of dreams or a living Elm Street nightmare.

Itumeleng Khune’s howler of a pass in the 12th minute was easily trapped by Karuru, who then teasingly for him, but excruciatingly for Khune, passed the ball into the net.

Chiefs, despite their strikingly beautiful match-kit which is the best in the league, have always worn a shell-shocked look this season.

After the early one-two punch, they were winded and were fortunate to have not conceded a third in the 26th minute when Rodney Ramagalela was wrongly adjudged to be offside.

Smelling blood, the visitors continuously searched for the killer blow, but it wasn’t to come in the first half.

Donald Makgetlwa had a screamer of a chance go wide in the 36th minute, but Mumuni Abbubaker’s 37th minute shot was well saved by a partially obscured Khune.

Rodrick Kabwe, who was a menace all game, had a chance narrowly go wide in the 38th minute.

Chiefs threw on Bernard Parker and Lazalous Kambole for the ineffective Anthony Akumu and Lebogang Manyama and finally played with a semblance of structure.

Even though, they were lucky not to go three down in the 59th minute when Karuru’s tired chance couldn’t get the beating of Khune. That was the spark that Chiefs needed and from the hour mark, they took charge of the game.

Their first goal, through the industrious Nkosingiphile Ngcobo, was lucky in that was tackled and the ball still slid through to the net.

Parker, though, had provided the key run and assist that led to the goal.

Chiefs were now doing all the playing, with it being clear that their pride wasn’t allowing them to cough up a loss against Leopards in the same way they did against Swallows FC.

That said, they did eventually equalise in the 86th minute through Khama Billiat, again through a stroke of good fortune earned by their hard work.

A throw in was badly cleared by the Leopards defence and Aro Andrianarimanana found the ball being blasted into him by Ethen Sampson.

The ball came off the cross bar, but Billiat was there to bundled in the ball and give Chiefs what was at the end of the day, a deserved point.

An Argentine senator wants to put Diego Maradona on the country's bank notes and presented a project to Congress on Monday to get the late soccer ...
Sport
1 year ago

Istanbul Basaksehir's players, closely followed by their opponents Paris St Germain, walked off the pitch during a Champions League soccer game on ...
Sport
1 year ago

Pierre-Emerick Aubameyang has been fined $10,000 for social media posts that tarnished the "honour and image" of the Confederation of African ...
Sport
1 year ago

Former Arsenal midfielder Freddie Ljungberg has questioned the club's decision to freeze out Mesut Ozil from their Premier League squad and says ...
Sport
1 year ago

Kaizer Chiefs defender Daniel Cardoso says they have to win Wednesday's league clash against rested Black Leopards at FNB Stadium to snap their ...
Sport
1 year ago