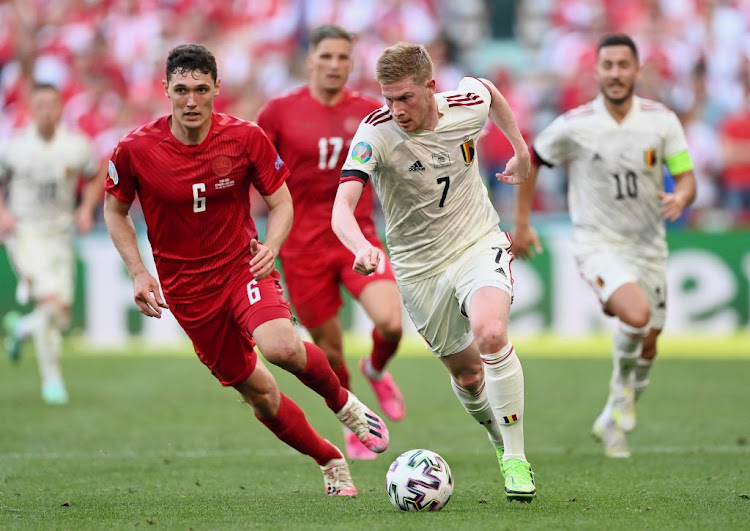 Kevin de Bruyne of Belgium runs with the ball under pressure from Andreas Christensen of Denmark during their Uefa Euro 2020 Championship Group B match at Parken Stadium on June 17 2021 in Copenhagen, Denmark.
Image: Stuart Franklin/Getty Images

Kevin de Bruyne came off the bench to inspire Belgium in a 2-1 comeback win over Denmark on Thursday to clinch their place in the Euro 2020 knockouts on an emotional afternoon as both sides paid tribute to Christian Eriksen.

Denmark got off to a dream start when Yussuf Poulsen put them ahead after 99 seconds as the team rode a wave of sentiment over playmaker Eriksen’s cardiac arrest in their first game.

Denmark dominated the rest of the first half but Belgium turned to a bench bursting with talent and De Bruyne, who came on right after the interval, set up a sublime equaliser by laying on a pass for Thorgan Hazard to level in the 54th minute.

De Bruyne then completed the comeback by finishing off another classy team move to thump the ball into the net in the 74th minute.

Denmark never gave up and had numerous attempts to equalise, with striker Martin Braithwaite hitting the bar with a header and narrowly failing to connect with a cross.

Belgium lead Group B with six points and became the second side in the tournament along with Italy to clinch their place in the last 16. Denmark have yet to earn a point and will need to win their final game against Russia and hope it is enough to get them through.

Both sides’ fans and players participated in a tribute to Eriksen before kickoff as a giant Denmark shirt with the player’s name and number 10 was displayed on the pitch.

The two teams then stopped for a moment’s applause in the 10th minute and the Danish crowd unfurled a banner saying: “All of Denmark is with you Christian”.

Denmark came alive in the atmosphere and pounced on a poor pass from Belgium’s Jason Denayer which allowed Pierre-Emile Hojbjerg to feed Poulsen, who fired into the bottom corner.

It was the second fastest goal in European Championship history, only trailing Dmitri Kirichenko’s for Russia against Greece in Euro 2004 after 67 seconds.

With 25,000 fans raising the roof at the Parken Stadium, Denmark continued to overwhelm their more illustrious opponents with rapid, direct attacks and should have added to their lead.

Joakim Maehle shuffled through the area to get close to goal before Belgium keeper Thibaut Courtois swiped the ball from his feet while Mikkel Damsgaard cut into the area and curled a shot just wide of the far post.

Belgium made the Danes pay for not increasing their lead.

Romelu Lukaku burst down the Right hand side to take out two defenders and pass to De Bruyne, who showed remarkable poise to play in Hazard to score.

The Manchester City midfielder, who missed the start of the tournament with a head injury, then provided an unstoppable finish as his side’s superior talent shone through.