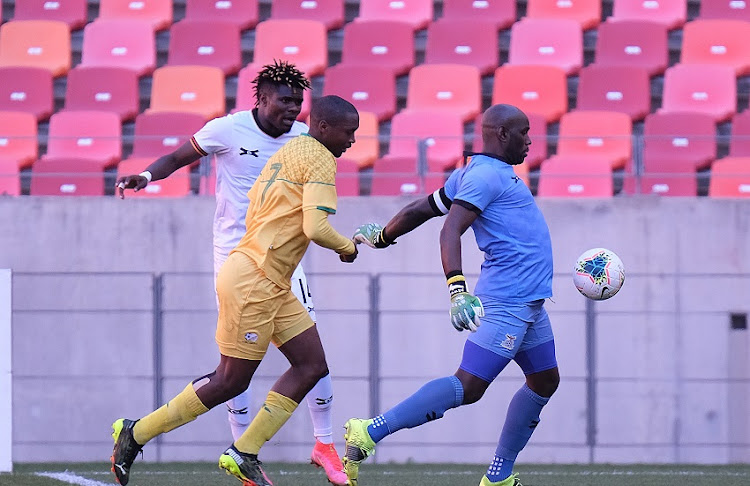 The developmental Bafana Bafana at the Cosafa Cup ended Group A unbeaten and top of the log with their 0-0 draw against Zambia at Nelson Mandela Bay Stadium on Wednesday.

SA (10 points) had already qualified for the semifinals with two fairly unconvincing 1-0 wins‚ against Botswana and Eswatini‚ which preceded Tuesday’s far more fluid 4-0 thrashing of Lesotho.

Defending champions Zambia‚ one of the favourites for the trophy‚ bowed out of the tournament. Eswatini’s 1-1 draw against Botswana saw them finish second in Group A and reach the semis‚ where they meet Senegal on Friday. Bafana meet Namibia.

Given the bizarre scheduling of both teams playing their second games a day after their matches on Tuesday‚ both benches rang the changes‚ and both sides put up relatively sluggish performances in a game of few chances.

Zambia‚ having strangely started with 1-0 defeats to Lesotho and Eswatini‚ had rallied with a 2-1 win against Botswana on Tuesday. They needed another victory against the hosts‚ and for Eswatini to lose against Botswana‚ to reach the semifinals.

Having qualified‚ SA had sent out a mixed-strength line-up. Bafana assistant coach Morena Ramoreboli‚ taking charge while coach Helman Mkhalele isolates with Covid-19‚ even gave some of the new call-ups who joined his team against Lesotho‚ a second run in the space of 48 hours.

Both halves were a dour midfield battle. SA did manage more of the attacking play in the opening 45 minutes‚ and had some half-chances‚ such as when Maart chipped in from the edge of the box on the right‚ Sibanyoni heading over.

Zambia’s best opportunity came with the clock winding down to the break. Mulenga found space on the right and crossed‚ Phiri getting in ahead of his marker but awkwardly heading off target.

Zambia‚ although surely feeling the effects of a second game in two days‚ pushed as best they could for the winning goal they needed to stay in the competition after the break. SA worked hard to contain them.

Substitute Kelvin Kampamba’s low strike from outside the box bounced awkwardly‚ Vyver parrying and almost allowing another replacement‚ SuperSport United forward Ghampani Lungu‚ to win the ball off the keeper.