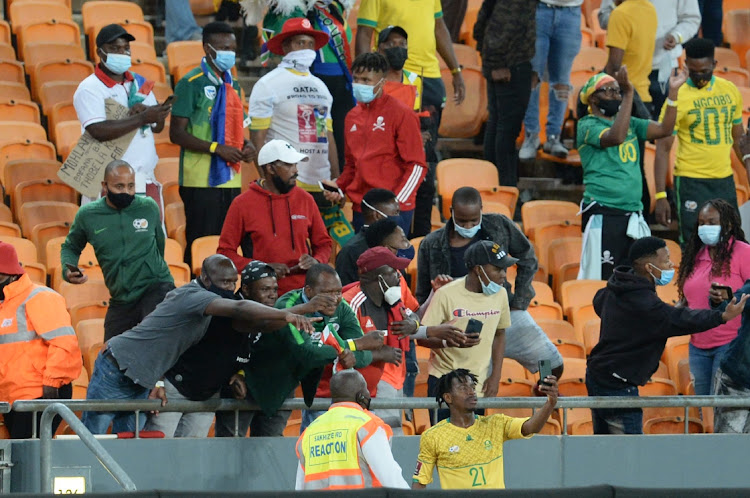 Two thousand fans and staff made their way to the FNB stadium to watch Bafana Bafana's win against Ethiopia in a World Cup qualifier this week. That number may increase for their next match at the stadium against Zimababwe.
Image: Lefty Shivambu/Gallo Images

FNB Stadium may be fuller than it has been in more than a year-and-a-half, when Bafana Bafana take on Zimbabwe next month.

This after the SA Football Association (Safa) confirmed that it is considering increasing the number of supporters who can attend that game from 2,000 to more than 20,000.

The catch? Everyone will have to prove they have been fully vaccinated against Covid-19.

The same rule applied on Tuesday when 2,000 fans and staff made their way to the stadium to watch Bafana's win against Ethiopia in a World Cup qualifier.

“We have already started preparing for the Zimbabwe game and we are going to engage various stakeholders to suggest increasing the percentage of those attending the next game,” Safa communications manager Dominic Chimhavi said.

Stadiums were closed when a national state of disaster was declared in March last year,  amid the Covid-19 pandemic.

However these regulations were amended and gazetted by co-operative governance and traditional affairs minister Nkosazana Dlamini-Zuma on Monday, allowing attendance at stadiums up to a limit of 750 people or less for indoor venues and 2,000 at outdoor venues.

“If the venue is too small to hold the prescribed number of persons observing a distance of at least 1.5m from each other, then not more than 50% of the capacity of the venue may be used, subject to strict adherence to all health protocols and social distancing measures,” said Dlamini-Zuma.

EFF MP Mbuyseni Ndlozi was among those who called for this limit to be increased.

“On lockdown level 1, government should allow stadiums to fill to 50% of their capacity,” he said.

He added that this should not be an issue because “stadiums are open air and allow for easy social distancing”.

While some agreed, others said it would be a logistical nightmare to manage so many people during a pandemic, including checking whether they are vaccinated, admitting them into the stadium without issues or serious delay, and enforcing health and safety measures like mask wearing and social distancing.

The debate continued on Thursday, with many welcoming the possible increase to 20,000.

The funny thing is Stadiums are wide open and can allow distance between a number of people, so why is it hard to allow about 40% capacity with proper seating planning 🤔

The 2000 number was copied from the UK when they started allowing fans in the stadiums. We have a useless government.

Commenting from house of pain

‘No brainer’ or not thinking straight? — EFF’s Ndlozi sparks debate with calls for more spectators in stadiums

“On lockdown level 1, government should allow stadiums to fill to 50% of their capacity. Stadiums are open air and allow for easy social distancing," ...
Sport
1 month ago

SA Football Association (Safa) president Danny Jordaan said they passed the pilot project of welcoming fans back to the stadium during Bafana ...
Sport
1 month ago