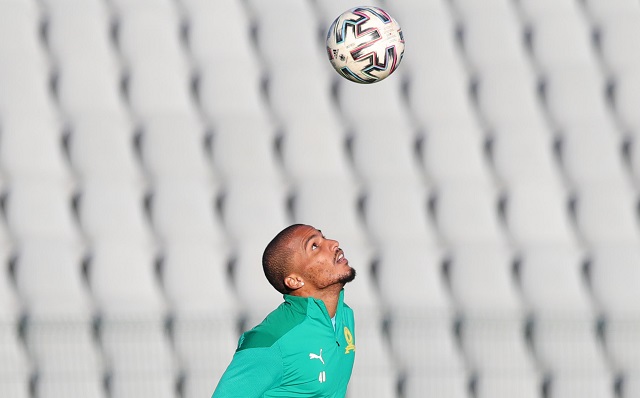 Rivaldo Coetzee of Mamelodi Sundowns warming up before the DStv Premiership match against Swallows FC at Dobsonville Stadium in Johannesburg on May 29 2021.
Image: Samuel Shivambu/BackpagePix/Gallo Images

Rivaldo Coetzee had a muscle contusion, Mamelodi Sundowns co-coach Rulani Mokwena said as he explained the key defensive midfielder’s absence from the line-up for almost a month.

The player finally  made a return as an 89th-minute substitute for striker Pavol Šafranko in Downs’ 2-0 DStv Premiership win against Sekhukhune United at Tuks Stadium on Saturday.

He had not played as a starter since the Pretoria side’s MTN8 final penalties triumph against Cape Town City at Moses Mabhida Stadium on October 30, a little over a month ago.

"‘Riva’ had a contusion — just a muscular complication, but he hasn’t trained fully with the team,” Mokwena explained.

“But we’ve got a couple of situations and we had to fast-track his return, but the medical department has done fantastic work to try to get Riva back.”

Among the other “situations” Downs have had, Lebohang Maboe is still on the mend from knee surgery  in August.

On two other notable absentees, Sphelele Mkhulise and Gift Motupa, Mokwena added: “Mkhulise has got health issues. There are a few health issues in our team. There’s a smallanyana bug that is going around the side.

“So a lot of our players who are on that list have been out because of medical complications. And I think if you understand the importance of privacy in relation to medical prognosis you will understand why I can’t divulge more into their health-related absence.

“Motupa has a muscular complication and with soft tissue injuries you’ve got to be very careful because if you rush and don’t go through the right rehabilitation process then you risk having the player out even longer.

Denis Onyango took one for the team with the red card he had to concede in the dying moments of Mamelodi Sundowns' 2-0 win against Sekhukhune United ...
Sport
5 months ago

'It was not a penalty but I will take it': Sekhukhune coach Makhubedu after ref awards decision to Sundowns

Sekhukhune United coach MacDonald Makhubedu was as diplomatic as he could be saying, "It was not a penalty but I will take it", after his team's 2-0 ...
Sport
5 months ago

Mamelodi Sundowns kept an iron grip on their lead of the DStv Premiership, though they also had to fight for it beating Sekhukhune United 2-0 at Tuks ...
Sport
5 months ago

How Kaizer Chiefs star midfielder Khama Billiat got his groove back

Kaizer Chiefs' ascent to second place on the DStv Premiership standings behind defending champions Mamelodi Sundowns has coincided with the revival ...
Sport
5 months ago