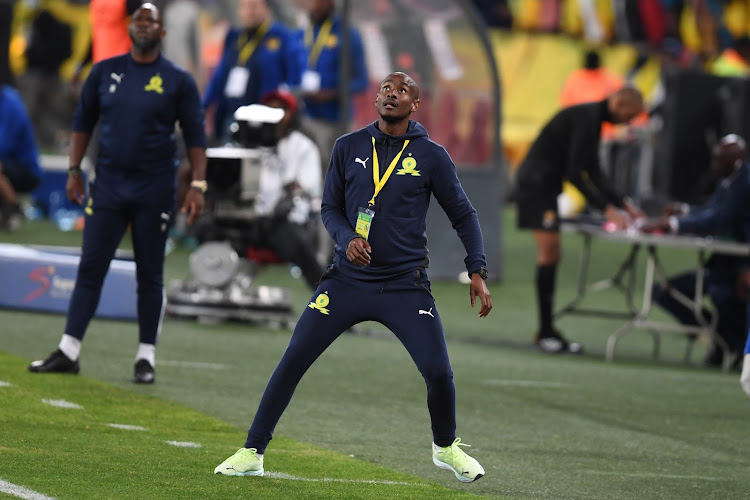 Rulani Mokwena joked about fielding Sundowns’ senior coach Steve Komphela in their defence when he was asked about injuries at the club after their 2-1 Nedbank Cup semifinal win against Royal AM in Durban on Saturday.

Sundowns are on the verge of winning a domestic treble after clinching the DStv Premiership title last week to add to the MTN8 early in the season. The Brazilians can add their third trophy if they win the Nedbank final against Marumo Gallants at Royal Bafokeng Stadium on May 28.

“We don’t have an injury crisis because Divine [Lunga] will play there [at centreback] and if it comes to a push Steve Komphela will get ready because that’s a position he played earlier in his career,” Mokwena joked.

Sundowns will face Sekhukhune United on Tuesday before their big game against Kaizer Chiefs on Sunday. Downs then host Stellenbosch FC on May 14 and finish the season with an away game against Royal on May 21.

Mokwena remained coy about Sundowns' prospects of winning the treble.

“We’ve got very important games to come and it’s important we stay focused and try to win the next few games, and then deal with the final a bit later.

“We have to be professionals. Mamelodi Sundowns is a club that expects us to win every match. For now we’ll focus on the next four games, which are in the league, and we try again to make sure we win the remaining games and hopefully that momentum carries us into the final.

“We focus on all the games. At Sundowns we have to win all the games. There are no dead rubbers, there’s no excuse not to win any match. We’re professionals and we’ll keep going, keep trying to win the next match.”

Mokwena said Sundowns have not thought much about Gallants but did say it won’t be an easy final against a club coached by Dan Malesela, a former captain of Sundowns.

“We’ll think about Marumo Gallants as we come closer to the final,” said Mokwena.

“Both teams will be away and because of the draw we’re home. It’s a very good side, well coached, and we watched them on Friday [in their semifinal win against Tshakuma FC].

“It’’s going to be a very difficult final but first it is Sekhukhune, Chiefs, Stellies, Royal and then we concentrate on the final.”

Mamelodi Sundowns remain on course to win a domestic treble after they capped a remarkable week in which they were confirmed as SA league champions ...
Sport
2 weeks ago

'It's hard not to get emotional,' Sundowns co-coach Mokwena praises Onyango on his ninth league title