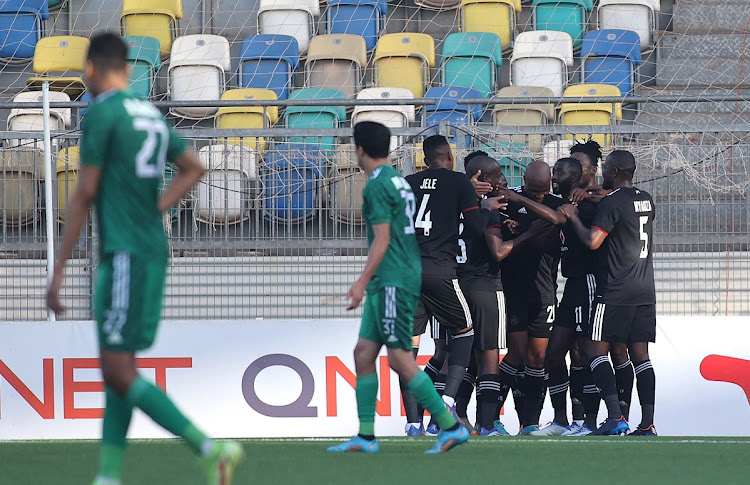 Goodman Mosele of Orlando Pirates is congratulated for scoring his team's second goal in the Caf Confederation Cup semifinal first leg match against Al Ahli Tripoli at the Martyrs of February Stadium in Benghazi, Libya on May 8 2022.
Image: Abbas Farda/BackpagePix

Mandla Ncikazi has cautioned Orlando Pirates against complacency for the second leg of their Caf Confederation Cup semifinal against Al Ahli Tripoli at Orlando Stadium on Sunday, where Bucs will hold a 2-0 advantage from the first leg in Benghazi.

Pirates have one foot in the final having scored two away goals, which count double when the aggregate scores end level. The Soweto  giants slickly executed a gameplan well plotted for a continental away match at the Martyrs of February Stadium on Sunday.

Co-coach Ncikazi praised Pirates for their application against a “very good team” on the artificial surface. Goals by Innocent Maela in the 8th minute and Goodman Mosele in the 29th earned a crucial victory for the team aiming to improve on their final defeats in the 2013 Champions League and 2015 Confed.

“We played a good team — this Tripoli team is a good team. They are good tactically, they can play direct, they're skilful.

“But one must give credit to our players. I thought they applied themselves well.

“And I must thank our team management for the logistical support. I'm happy and proud of our team for the win away from home where it was important to score and get a result.

“The game is not over. It's only half time and we are only leading. When we go back home they can do the same thing.

“We will treat the second leg seriously. But it's important to understand the dynamics of African football and that a goal away is important.

“We'll treat the next match as being 0-0, respect Ahli because they are a good team, and try to progress into the next round.

“But we're not going to do anything less. We're going to prepare and prepare for a good team.”

Pirates are aiming to add to their lone continental title in the 1995 Champions Cup — the precursor to the Champions League. The Confed also offers Bucs their last opportunity for silverware in 2021-2022, where they have battled domestically.

Orlando Pirates have a foot in the Caf Confederation Cup final after a polished 2-0 victory in the opening, away leg of their semifinal against Al ...
Sport
1 week ago

Orlando Pirates co-coach Mandla Ncikazi says his teams need at least one away goal from the first leg of their Caf Confederation Cup semifinal ...
Sport
1 week ago