Swanepoel on BEE and lack of juniors 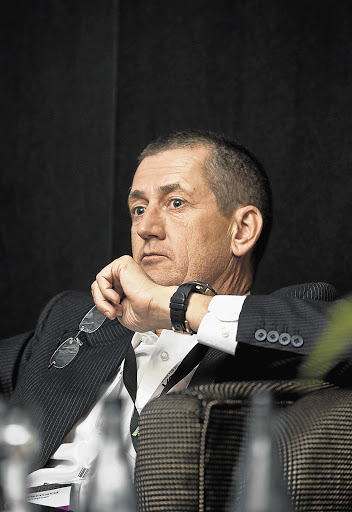 The state of the nation address and the Investing in Africa Mining Indaba, which took place in Cape Town earlier this month, have dominated headlines. Bernard Swanepoel, former Harmony Gold CEO and chairman of The Joburg Indaba, which takes place in October, shares his thoughts.

Do you think the indaba did a better job at discouraging investment than firing it up? Particularly given Mining Minister Ngoako Ramatlhodi's announcements on issues such as empowerment?

Obviously, the big corporates, which make up the Chamber of Mines, signed off on a draft piece of legislation that was not particularly unanimous in terms of other players. I think there were a lot of other [particularly the junior] industry players ... [who] didn't feel adequately involved.

You comply, you make a case for giving value away, you get your shareholders to approve it and then, 10 years later, you get told that the spirit of the law was different... This will certainly reintroduce significant uncertainty in the eyes of investors.

Can the Mineral and Petroleum Resources Development Act satisfy all the players in the mining sector?

Government must ... weigh up different interest groups and constituencies, and make a set of rules. I feel very strongly that we've got Big Government dealing with Big Companies [through the Chamber of Mines] and [then] there's Big Labour.

The reason one of the best endowed countries in the world in terms of natural resources has, for all practical purposes, no junior sector has got a lot to do with that.

Has the chamber done the right thing in trying to appease labour and government, or has it abandoned mining companies?

The chamber endeavours to serve the interests of large companies. So as a lobby group, they do what they are meant to do and I'm sure their current members are happy with what they do.

But they are the past of the country, not the future. And so the chamber speaks on behalf of an ever-smaller group of people ... it can't claim to speak on behalf of explorers.

What should have been different over the last 20 years?

I think keeping South African management teams busy with legacy issues and transformation issues, instead of creating value for all stakeholders, is a contribution.

I certainly think that we have a tax regime which is not friendly to the high-risk dollars required for exploration.

The good news is that the resources are still in the ground. We've lost out on the last boom cycle, but there will be another one.

Are you hopeful of an enlightened minister under the present government?

I am an optimist, but then all miners are ... I think the critical test is ultimately having a minister ... who can make policies which clearly have got the long-term best interests of the nation at heart.