Team SA left out in the cold at Davos 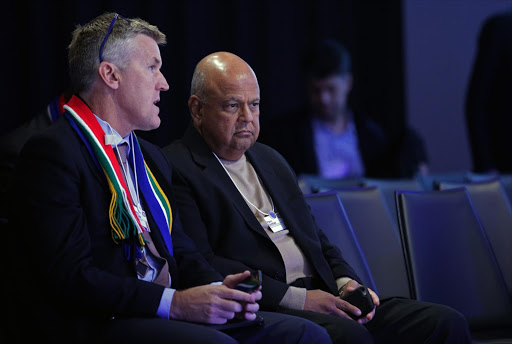 "The first rule of Fight Club is you don't talk about Fight Club," instructs Brad Pitt's character in the movie of the same name.

Delegates to the more genteel World Economic Forum at Davos abide by that rule, too. They were there to influence, cajole and do deals. Exactly who was speaking to whom remained a mystery to those outside of the countless private meetings held over three days of intense networking.

That made it nigh impossible to measure the real impact of what went on here. Asking anyone who they are meeting with in Davos is treated as rude and intrusive. You are met either with a stony stare or some kind of obfuscation - clearly, what happens in Davos stays in Davos.

The 46th annual WEF gathering, under the banner "Mastering the 4th Industrial Revolution", took place against a backdrop of global uncertainty with issues of migration and refugees high on the agenda along with worries about the state of the global economy and whether the current bout of market turmoil is simply reflective of seven years of soft monetary policy and quantitative easing coming to an end or something far more sinister.

Nothing ruffles the feathers of the global elite more than a little turmoil on markets. The gathering in Davos this year was characterised by more than its fair share of apprehension about the future - and for few more so than the South Africa delegation.

Publicly at least, this year's showing by Team South Africa was muted. The confidence and bravado of South African delegations in previous years had all but evaporated. The elephant in the room was the sacking of finance minister Nhlanhla Nene in December, with the issue discussed only in hushed tones at the hub of South African activity in Davos, the Kirchner Museum.

It was up to new Finance Minister Pravin Gordhan to open the first-night cocktail party on Wednesday. He was eager to press the flesh of the South African business leaders who were there and to assure them that the budget process at the Treasury would be designed to convince ratings agencies that South Africa's finances were being adequately managed.

"You must never forget," Gordhan said, "in 20 years of our democracy we have never broken a fiscal promise."

The South African delegation was disappointed by the small showing of non-South Africans at what is usually a vibrant event. Overall there was noticeably less international interest in South Africa-hosted events this year. A discussion on the state of financial regulation and the health of the financial services industry on Thursday afternoon was cancelled due to lack of interest.

Earlier in the day President Jacob Zuma had opted out of an annual showpiece discussion about African economies. His office claimed to have told the organisers, who scrambled for a last-minute replacement, that he had a conflicting appointment to discuss "warm and strong" bilateral relations with Swedish Prime Minister Stefan Lofven.

"Previously we traded on the rainbow nation, there was a vibe, there was excitement about South Africa. You're just not seeing that here this year," said one South African CEO following a presentation by Zuma.

Perhaps the gloom was reflective of the 74% drop in foreign investment into South Africa last year as recorded by the UN Conference on Trade and Development. While the government was keen to showcase a slew of attractive motor industry deals concluded last year, the reality is that South Africa drew just $1.5-billion (R24.7-billion) in foreign direct investment. That's less than Nigeria - or Mozambique.

Gordhan played down apparent contradictions in the "open for business" mantra and the signing into law at roughly the same time as the Nene scandal of the Protection of Investment Act. The act, described by some critics as "Orwellian", replaces a host of bilateral investment treaties.

Trade and Industry Minister Rob Davies has on many occasions explained that the bill provides local and international investors with the same level of protections while ensuring the country remains open for foreign investment.

"Protection of investment happens all over the world. Our bilateral treaties were aged," said Gordhan. "I don't think it should be a deal-breaker in terms of investment because we are providing world-class investment protection so it would be very foolish to do completely wrong things contrary to our objectives."

If the Team South Africa tone was muted, so was the mood of the gathering overall. Davos, once home to the headquarters of the Swiss Nazi Party, is a place where big egos and opinions collide.

Chinese Vice-President Li Yuanchao sought to soothe concerns about a significant slowdown in China and explain that the much-needed transition from a manufacturing-led to a consumer-led economy meant that the "new normal" was slower growth.

Hungarian-born financier George Soros stole headlines with concerns that the world's second-biggest economy was headed for a hard landing.

The gathering, often criticised as a talk shop for the 1%, seeks to identify global issues and open them up for discussion. In recent years it has tried to make itself more accessible to the public and provides public venues where anyone who happens to be in town can attend without accreditation.

In addition to pressing current affairs, the gathering hosted multiple discussions on the relentless rise of automation and the role ever more intelligent machines will play in our future and how this will affect white-collar jobs. The fear is that automation could replace as many as seven million jobs worldwide in the next five years, and that is just the start.

Real work does happen in Davos. It's not just cocktail parties and who is serving the best caviar this year. It was here in 1992 that Nelson Mandela and the South Africa delegation were convinced to opt for free market policies. Former Turkish prime minister Turgut Ozal once quipped that delegates at Davos talked his country and Greece out of going to war in 1987.

Was a crisis averted or exacerbated in Davos this year? Time will tell. What happens in Davos tends to stay in Davos.