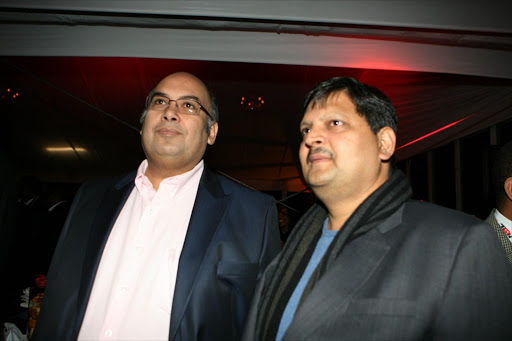 The dramatic resignation of the Guptas and Duduzane Zuma from Oakbay Resources and Energy is believed to be linked to attempts to secure funding for the R2.15-billion acquisition of Optimum Coal as well as efforts to appoint new bankers and auditors.

The resignation of Atul and Varun Gupta, the nonexecutive chairman and CEO respectively of the company, was announced on Friday afternoon and is effective immediately. President Jacob Zuma's son Duduzane has also resigned as nonexecutive director of Shiva Uranium.

It also emerged that Oakbay's last remaining local bank, believed to be Nedbank, has given notice that it will terminate its services on June 6.

Standard Bank said it did not comment on its relationship with customers or potential customers to protect client confidentiality and could "neither confirm nor deny that it has business relationships and dealings with Oakbay".

In a Sens announcement, Oakbay said the company continued to be serviced by a major Asian bank with a presence in South Africa. That bank has requested that the company not communicate its name, but local bank sources speculate it is Bank of Baroda, India's third-largest lender by assets.

The announcement about the key resignations was made just hours after a meeting of Optimum Coal Mine's creditors approved the business rescue plan in terms of which Tegeta Exploration & Resources, which is part of the Oakbay group, is the potential acquirer of the coal mine in a transaction valued at R2.15-billion.

In a joint statement issued on Friday afternoon, the business rescue practitioners said all conditions for the transaction had been fulfilled, and "once the purchase price is paid the deal will conclude".

But chances of concluding the deal became significantly more difficult when it emerged, last week, that first Absa (Oakbay's main bank) and then FNB had terminated their relationships with the group. The group's auditor, KPMG, also gave notice last week, with immediate effect, that it was terminating its 15-year relationship with Oakbay.

In an internal e-mail, KPMG said the recent media and political interest around the Gupta family had led to an "association risk" that was too great. KPMG South Africa's association with Oakbay looked increasingly at odds with KPMG International's pretensions to be a standard-bearer for corporate governance.

In a recent report on banking regulation, KPMG examines the governance challenges facing banks, focusing on "how to meet the expectations of regulators and supervisors while addressing the commercial advantages of good governance".

Oakbay needs to appoint a JSE-accredited auditor before the end of June or it risks the suspension of its JSE-listed subsidiary Oakbay Resources. The threatened suspension of its listing makes it difficult for this cash-strapped company to raise funds through the JSE. Oakbay Resources' annual report reveals that for the year to February 2015 its total assets exceeded total liabilities by R5.1-million, down from R4.7-billion a year earlier.

Optimum Coal, which in terms of a 30-year contract has to supply coal to Eskom at R150 a ton, is currently loss-making. However, the contract expires in 2018 and is expected to be renewed on far more attractive terms.

Eskom CEO Brian Molefe said the energy parastatal had no intention of releasing Optimum from its obligation to supply coal at R150 a ton or letting it off its R2-billion fine, levied a few years ago, for supplying Eskom with poor-quality coal. But he stressed that anyone taking a 20-year view on Optimum could see how attractive it was. "Oakbay ... know they will have to carry it for the first two years."

Given Eskom's refusal to let Soweto residents off their debts, Molefe said, it was impossible to consider releasing Glencore or Oakbay from their obligations.

One banker said the resignations "change the optics, which is quite meaningful in this environment", but added that it did not do much in terms of the reality and may even make the situation less transparent.

Although the Guptas have resigned, they remain the dominant shareholders. The Oakbay Resources annual report shows Atul Gupta holds 68% of Oakbay Resources, through his holding in Oakbay Investments. Mauritian-based Action Investments holds 8.47% and, following a controversial debt-for-equity swap, the Industrial Development Corporation has 3.57% after funding the R250-million acquisition of Shiva Uranium in 2010.

On Friday, the IDC said it was waiting to see how Oakbay was going to resolve the issue around its banking and auditing services, which are required by the Companies Act.