What traders are watching ahead of French presidential election 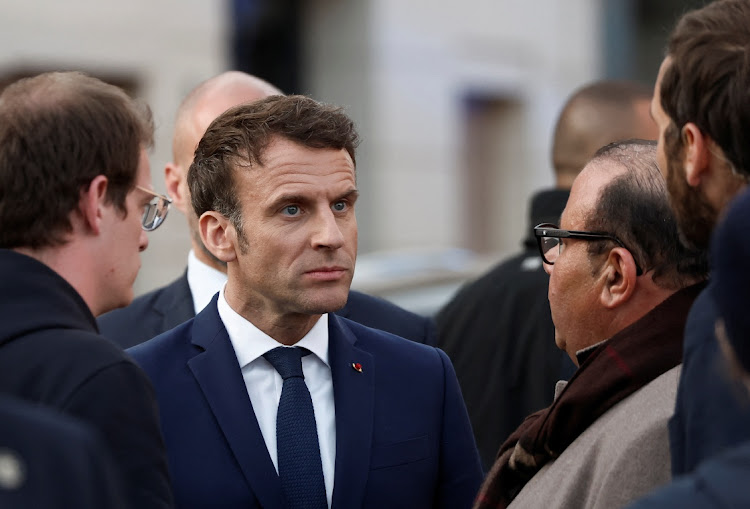 Since Emmanuel Macron became French leader five years ago, the country’s equities have prospered. But with investors on edge over his presidential election opponent’s less business-friendly policies, the market’s future hinges on the outcome.

According to the polls at least, Macron remains ahead of Marine Le Pen, a result that most strategists and analysts would prefer. Yet the contest is close and few are prepared to rule out a surprise. 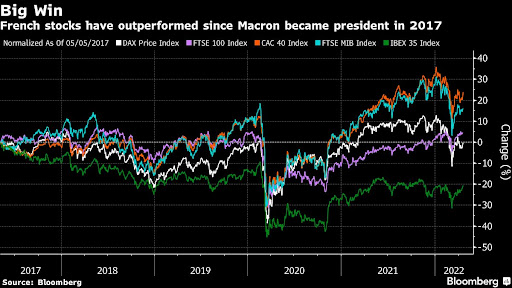 Since Emmanuel Macron became French leader five years ago, the country’s equities have prospered. But with investors on edge over his presidential election opponent’s less business-friendly policies, the market’s future hinges on the outcome.
Image: Bloomberg

“The world has enough problems without a Le Pen presidency in France,” said Matteo Brancolini, a fund manager at BPER Banca in Milan. “Her victory would destroy the united EU response that followed the shock of Russia’s invasion of Ukraine. A collapse in that unity would be a huge upset for markets.”

Here are some charts and sectors to watch ahead of Sunday’s poll:

The CAC 40 Index has significantly outperformed most European peers since Macron’s election in 2017, but this year hasn’t started well. The index is down about 6%, far behind gains of 1% for Spain’s IBEX and 3% for the U.K.’s FTSE 100.

While the election might be a factor in the underperformance, the index’s high dependency on luxury stocks is a bigger one. After being responsible for a large chunk of the CAC’s outperformance in the Macron years, the likes of LVMH SA, Kering SA and Hermes International have had a tough start to 2022, weighed down by rising interest rates, a resurgence of Covid-19 in China and the war in Ukraine. Were Le Pen to gain power, the possible introduction of new tax policies and tariffs could weigh further on the sector.

French equities are relatively cheap compared with European stocks in general. Having traded at a 5% premium in December 2020 based on the forward price-to-earnings ratio, the CAC is now at a discount of about 10%, the most since 2011, during the sovereign debt crisis.

According to Bloomberg Intelligence strategists Laurent Douillet and Tim Craighead, higher commodity prices and resilient luxury-goods and industrial companies could allow the CAC to beat the market earnings consensus and surpass the Stoxx 600’s growth expectations.

“A Marine Le Pen presidential victory is a risk, as her anti-EU stance and potential lack of a parliamentary majority would lead to gridlock and hit the index valuation hard,” they said. Barring such an outcome, they see the CAC 40 rerating towards a forward P/E of 13 to 13.5 times, compared with the current 12.5 times, near its lowest since the growth scare of 2018.

Back in 2017, banks, business services, technology, retail, telecom and utilities outperformed the most after Macron’s victory. Should the president prevail again this time, lenders would be among those to feel the benefit, according to Citigroup Inc. strategists including Beata Manthey.

A Stock Trader’s Guide to French Elections: Winners and Losers

In the event of a Le Pen win, Barclays Plc strategists led by Emmanuel Cau see the most downside for domestic plays including utilities, telecom, real estate, financials, along with periphery equities. A basket of France-exposed equities including Aeroports de Paris, Gecina SA, EDF SA, and construction stocks Eiffage SA, Bouygues SA and Vinci SA, could be vulnerable, having recovered after the first round of voting about a fortnight ago, Cau wrote.

While Amundi SA strategists warned last week that the probability of a Le Pen win was “not negligible” and that “hedges should be considered,” data compiled by Bloomberg from open interest in CAC 40 futures and put options suggest that investors aren’t taking a significant bearish view at this time.

After Wednesday’s debate between the presidential candidates, “traders in Euro Stoxx 50 Index options appear to agree that a Macron victory has increased in likelihood,” said Jaap de Vries, a trader at Optiver in Amsterdam. “That said, as the market appears to have priced out the possibility of a Le Pen upset, we could see an aggressive reversal of today’s rally if it happens.”

Volatility in European stocks, which had remained elevated ahead of the first round of elections, is also heading down to last year’s average and reducing the gap to U.S. peers.

An electoral surprise would result in “a brutal readjustment of risk,” said Oddo BHF strategist Sylvain Goyon, most likely reflected in a widening of the French government bond OAT-Bund spread and of the various peripheral Bund pairs, such as Italian BTP or Spanish Bonos. As for France’s 5-year credit default swaps, an insurance against the risk of default, they have risen moderately this year, but remain in line with the 6-year average.

According to Goyon, another consequence of a Le Pen win would be strong pressure on the euro vs the dollar, resulting from both risk aversion and expectations of a durable decoupling of monetary policies. Safe-haven currencies like the Swiss Franc would outperform, he said.

Trader’s Guide to the Euro Before French Presidential Elections

By contrast, victory for Macron would have few market implications, said UBS Group AG economist Dean Turner. “He is seen as the continuity candidate and has been expected to win for some time now.”