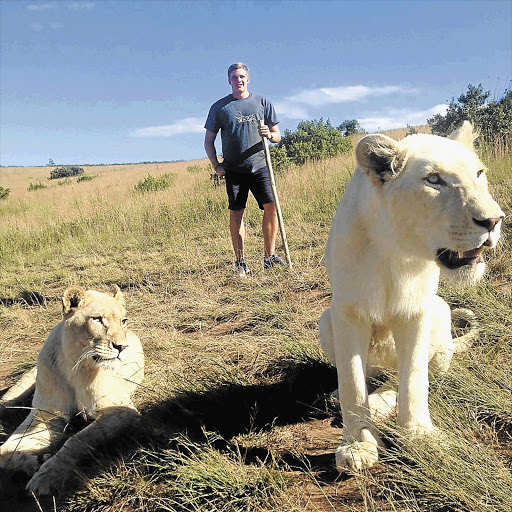 One of the only two survivors of Tuesday's brutal murder in the Stellenbosch winelands was taken back to the crime scene on Friday, but police would not say why.

It was the first time that Henri van Breda, 20, had returned to the family home on the De Zalze estate where his father Martin, mother Teresa and elder brother Rudi were bludgeoned to death in an axe attack. His sister Marli, 16, survived the attack but is still in a coma in a Somerset West hospital.

Henri called the emergency services soon after the murder, reporting that his family had been "attacked by a guy with an axe".

"They're unconscious ... and bleeding from the head, please, please," he told an operator. A recording of the call, in which he appeared to be calm, was posted on news websites.

Next-door neighbour Martin Locke - the former SABC sports anchor - was one of the first on the scene on Tuesday morning when emergency services arrived.

Locke said Henri had looked "utterly shocked". "When I heard all the commotion, I came outside and saw the younger boy sitting outside. He had a bruise on his face."

Locke said Henri sounded incoherent as he sat hunched over in front of the house.

"I tried to speak to him, but the police said that he wasn't saying anything. He really looked in a terrible state."

Alex Boshoff, a close friend of Henri's, said it was a miracle the young man had survived the attack.

Boshoff was at Henri's side after he was questioned by police.

With them was Henri's girlfriend, who was "crying her heart out", according to Boshoff.

"He is a big, tough guy, a rugby player, a rower. But now after this incident the guy I saw was a soft, broken man," said Boshoff.

"He had light head injuries, a small scrape, and that was about it. He was not looking good at all. And all I could say was: 'I'm sorry.'

"He was crying on my shoulder. It is a miracle. I have no clue how he was so fortunate, he is so blessed to have survived but then again now he is living through this pain. It is a bitter-sweet thing," said Boshoff.

Yesterday forensic investigators were still on the scene and carried away bags of evidence while neighbours looked on.

A source close to the investigation said Teresa and Marli had been found together on the balcony of the house. Marli was taken to hospital with multiple head wounds.

The bodies of Martin and Rudi, 22, were found in a bedroom.

Boshoff said nothing had been stolen, including family's Mercedes-Benz ML and E-Class vehicles.

"The bodies were covered in blood. My mom instructed me: 'Don't go inside to get your stuff even if police allow you to because it will scar you for life to see them there,'" said Boshoff.

He said Sasha, the family's dog, was unharmed. It usually slept in the parents' bedroom or in one of the children's rooms.

"Maybe she ran away. At least she is alive. She is with Teresa's family," he said.

Marli, a Grade 11 pupil at Somerset College, is being closely monitored by doctors at Mediclinic Vergelegen.

The principal of the school, Meg Fargher, said pupils had compiled a "memory book" with photographs and cards for Marli.

One message of support came from Marli's nursery school teacher, who described her as "daddy's little princess" who would come to school wearing a crown.

Her boyfriend, James Reade-Jahn, is back at school after taking a day off to deal with the shock.

He was seen at the hospital with his parents earlier in the week but it is not known if he was able to see Marli. Not even family members were allowed to see her at first.

Rudi had been due to return yesterday to the University of Melbourne, where he was about to finish a master's degree in engineering.

The university had been "deeply saddened" by the news of the murders, said spokesman David Scott. He said no decision had been taken on whether to hold a memorial service, but the university was "reaching out to students and staff to offer support".

A private memorial service for the Van Bredas will be held on Thursday in Pretoria, where they lived for many years.