Poles aren't just for exotic dancers, but fitness fanatics too

Pole dancing is demanding and painful at first, but once you get the hang of it, you're hooked, writes Claire Keeton 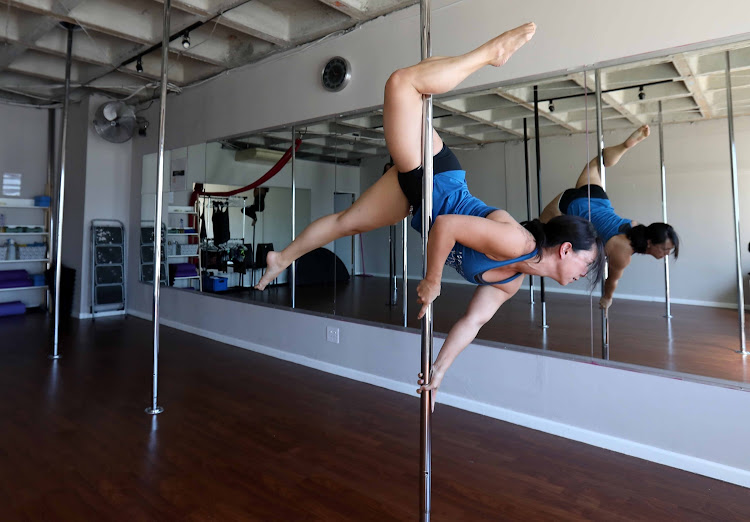 The magnetic pull of the pole has Candice van der Walt in its thrall and has made her phenomenally strong. She has the power of Wonder Woman and the stretchiness of Mrs Incredible.

Van der Walt was a cross-fit trainer, Kung Fu artist and hip-hop (not exotic) dancer in her free time before she got addicted to pole about 10 years ago. Those disciplines prepared her for the tough side of pole training, including bruising, while learning correct techniques.

Her passion got her back to pole within two months of the birth of her son, now three. As soon as she was allowed to be active, Van der Walt was shimmying her way into the vertical realm.

"I started from scratch and I struggled. I had to accept I had no core muscles after a Caesarean and patience was key," the 35-year-old dancer says.

Fit again, she makes difficult moves look effortless. In contrast I looked like a hungover monkey, clinging to the pole at weird angles as the poses got trickier.

I found them demanding and sore at first. But like anything you enjoy, the more focused you become the less you notice any discomfort. I can slam my body into rock when I'm climbing and not feel it and suspect advanced pole is the same, without the slamming. More spinning and gliding.

But how strippers pull off acrobatic poses in eight-inch heels, without grimacing, is a mystery to me.

Van der Walt has exotic pole evenings at her studio, sometimes with students, pointing out that pole grips best with skin and scant clothing.

Pole dancing, now an official sport, can be approached from three angles: acrobatic, dance and exotic. Van der Walt focuses on the dance but enjoys all the elements.

Pole dancing can be approached from three angles: acrobatic, dance and exotic

"I first tried it at a pole studio for a friend's birthday party. At the time I was dancing hip hop two to three times a week and doing Kung Fu twice a week, and I added pole," says Van der Walt, who was then a personal assistant. "I got addicted to pole, chasing goals and new moves. I would keep working at something until I got it," she says.

When her husband moved to Cape Town, Van der Walt qualified as a personal trainer and offered cross fit and Kung Fu training at a gym until her son's birth. After eight weeks, she was allowed to get active and the pole lured her back despite some risk. She went back as a beginner again to Vertical Secrets in Table View, a studio which is hers now.

She's on her poles six times a week, teaching and training. In one session, she taught me five basic moves, which I found absorbing.

Van der Walt started with the commands: designating the inside and outside legs and arms, which get surprisingly confusing at speed.

Then we started with a fireman's spin, an easy enough move if you don't make yourself dizzy! The fan kick and back hook spin, spinning backwards which felt counterintuitive, took more concentration.

I was surprised at how the "pole sit" - locking your feet around the pole, balancing and spreading your arms - hurt my feet initially but I got into it.

Then we tried basic climbing which is a technique I found more tiring than the usual tree-climbing style.

The final move of the day was an inverted crucifix: launching myself upside down, locking my feet around the pole, hanging and putting my arms out, which lasted briefly.

"One session is not enough to feel and judge pole art," says Van der Walt, suggesting that the exhilarating feeling - and I had a sense of how much fun it could be - takes off after about three months of training and increased skill.

Aerial silks seemed to me easier to get into, but pole art, once you master its secrets, has its own euphoria, judging by Van der Walt.

THE HEALTH BENEFITS OF POLE DANCING

Using your own body weight, like in pole dancing, is a type of resistance training, which is recommended for anyone participating in exercise.

High performance biokineticist Kelly Kaulback, from University of Pretoria's High Performance Centre, explains some of the benefits of resistance training:

• The Pole Dance Sports Association of SA lists pole studios at pdsasa.co.za. Safety is important, so make sure to train with a registered instructor.