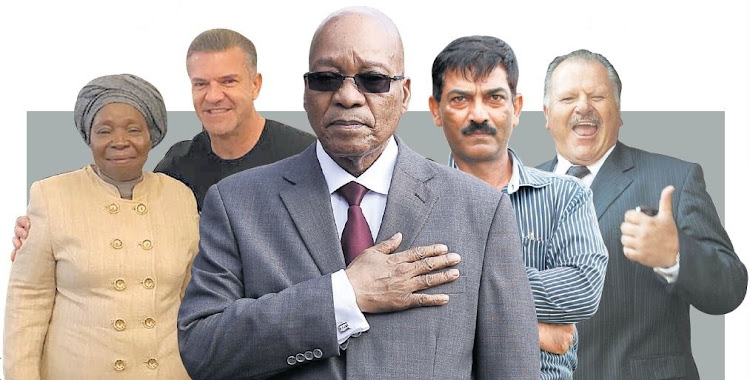 Jacob Zuma, with behind him, from left, Nkosazana Dlamini-Zuma with Adriano Mazzotti's hand around her shoulder; Roy Moodley and Glenn Agliotti.
Image: Supplied

A self-confessed smuggler, fraudster and money launderer has emerged as a contributor to ANC presidential hopeful Nkosazana Dlamini-Zuma's bid to replace her ex-husband, President Jacob Zuma.

This and other astounding information about secret payments to other members of the Zuma family, including the president and his son Edward, is contained in a sensational new book published today.

The President's Keepers reveals among other things that:

• Jacob Zuma - while he was president - was for a period paid R1-million a month by a security company that belongs to a crony and friend;

• The president failed to submit his tax returns during at least the first five years of his presidency; and

• Suspected tobacco smugglers paid tens of thousands of rands every month for several years to Zuma's son Edward for his political influence.

The book also reveals that flamboyant and controversial cigarette manufacturer Adriano Mazzotti has presented Dlamini-Zuma with an array of election paraphernalia, including election caps and shirts.

In an affidavit that Mazzotti signed in May 2014, he admits his complicity and that of his company, Carnilinx, in a host of crimes, including fraud, money laundering, corruption, tax evasion and bribery.

Mazzotti and Carnilinx are also said have contributed cash to Dlamini-Zuma's campaign.

In a recording made of Mazzotti he boasts of his friendship with former state security minister David Mahlobo, who was recently appointed energy minister.

Mazzotti, a close friend of EFF leader Julius Malema, says on the tape that Mahlobo asked him to spy on Malema.

He agreed, and on the tape, claims he is "playing both sides".

He also says he is "untouchable" and that his contacts in high places have made his tax problems all but disappear.

The State Security Agency picked up that Mazzotti was talking widely about his relationship with Mahlobo and started investigating him.

It was then that agents discovered Mazzotti's close relationship with Dlamini-Zuma.

Mazzotti had also been showing off photographs of himself and Dlamini-Zuma. In one he has his arm around her and another shows peaked caps emblazoned with "NDZ" and "Radical Economic Transformation".

The SSA is said to have warned Dlamini-Zuma about her relationship with Mazzotti, but she rejected the advice, saying that he had never been convicted of any crime.

However, in the affidavit Mazzotti made in 2014 while his and Carnilinx's tax affairs were being investigated by the South African Revenue Service, he says: "In its drive to promote its business, Carnilinx entered into a host of transactions, some of which were lawful and others corrupt and unlawful."

He admits wrongdoing and tells how the company "unlawfully and wrongfully" smuggled tons of tobacco to avoid paying excise duty, and set up money-laundering facilities to avoid paying taxes.

Mazzotti says in his affidavit that he handed R820,000 in cash to a prominent Johannesburg attorney, to be used to bribe former SARS investigations head Johann van Loggerenberg and former acting commissioner Ivan Pillay. The attorney, however, pocketed the money.

Then Mazzotti bribed a junior SARS official to get documents to strengthen his hand during negotiations with the tax collector. Mazzotti says in the affidavit that it was "wrong" to pay a "gift" of R500,000 in cash to a prominent senior advocate and acting judge.

He says that Carnilinx proposes that it pleads guilty according to several offences under the Criminal Procedures Act.

Running a country is more difficult than fighting for freedom

The ANC has dedicated this year to OR Tambo because we are marking the centenary of his birth. We also honour him for the role he played as a leader ...
Opinion & Analysis
4 years ago

SARS presented Mazzotti and Carnilinx with a tax bill of R600-million in 2014.

But SARS "nailed" Mazzotti before Tom Moyane, a close Zuma confidant, was appointed SARS commissioner towards the end of that year. Moyane purged the tax collector of some of its top executives, among them Pillay and Van Loggerenberg, both of whom were involved in tax investigations against Jacob Zuma, Edward Zuma and a host of cronies and associates.

After Mazzotti's affidavit, Carnilinx was down and just about out for the count. All that had to happenwas for a final settlement figure to be determined, which would have been several hundred million rands.

Before this could happen, Van Loggerenberg, Pillay and a host of senior officials at SARS were gone.

SARS has so far failed to enforce the R600-million tax bill against Mazzotti and Carnilinx.

Mazzotti denied this week that he was sponsoring Dlamini-Zuma's election campaign.

He also denied the many admissions of criminal acts he makes in his 2014 affidavit and said his "tax matters are privileged and strictly private". He said he and Carnilinx were tax compliant.

Other members of the Zuma clan, among them Edward, received money from cigarette manufacturers that SARS investigated for money laundering, fraud and tax evasion.

On October 5 2011 at 04.39.29am, for example, one of the smugglers sent this message to Edward: "Morning chief I need your bank details to do sumting into that account."

Into the Twilight Zone as the sun sets on Jacob Zuma

Initially, The Twilight Zone was a US TV series in the '60s. Since then it has come to mean the mental state between reality and fantasy - roughly ...
Opinion & Analysis
4 years ago

Edward replied at 04.51.15am on the same day and provided his account number and details, among them: "e m zuma fnb florida branch".

"Nthanthla" was the code word for Nkandla, the president's homestead in northern KwaZulu-Natal.

Edward did not respond to requests for comment this week.

Since August this year, Dlamini-Zuma's rallies have been flooded with "NDZ" T-shirts and black and white "NDZ" caps. Mazzotti owns a clothing company.

Dlamini-Zuma is associating herself with a tobacco manufacturer having listed as one of her achievements that she spearheaded legislation to ban smoking in public places when she was health minister in the '90s.

And while her supporters rage about the evils of "white monopoly capital", only one of Carnilinx's directors is not white.

At the time of going to press, Dlamini-Zuma - approached via her spokeswoman on Friday - had not responded to requests for comment.

Mazzotti recently bought a mine. In February, he became a founder member and director of Dithabeng Mining, an opencast mine in Mphahlele, 45 km southeast of Polokwane in Limpopo.

The company's statement on the website could as well have been written by Gupta acolyte Mineral Resources Minister Mosebenzi Zwane. The website says that "now, more than ever before, a shift through radical economic transformation is required".

The directors declare that the company "subscribes fully" to Zwane's controversial 2017 Mining Charter.

Mazzotti's relationship with Malema is well-known and in his affidavit, Mazzotti says that Carnilinx made a "donation" of R200,000 "towards a political party". The affidavit refers to Malema and the EFF.

In 2015 SARS alleged that Malema used a R1-million loan from a Carnilinx director, Kyle Phillips, to pay his tax debt.

Malema said yesterday he was not aware that Mazzotti was asked to spy on him, but said he wasn't surprised because Mahlobo "has been going around asking people for information about me".

Neither the SSA nor SARS responded to requests for comment.

The only response from the Presidency was: "All declarations were made to the relevant bodies."

If you want to know a man and judge his character, look no further than his company. If he keeps the company of upright, refined and law-abiding men, ...
Opinion & Analysis
4 years ago

The race to become the next ANC president has entered its most important phase, that of branch general meetings.
News
4 years ago

To animate his otherwise grim mini-budget on Wednesday, Malusi Gigaba wove in the motif of a harvest and the idea of reinvention, derived from the ...
Opinion & Analysis
4 years ago

Our double dose of despair, courtesy of Zuma and his cabinet of incompetents

Even for a country accustomed for so long to a daily diet of dispiriting events, blatant criminality and plain stupidity in high places, the ...
Opinion & Analysis
4 years ago