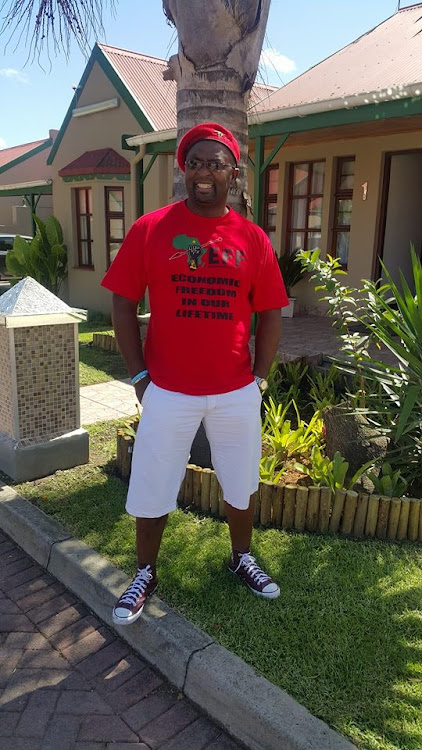 Zolile Xalisa says Julius Malema runs the EFF like his personal fiefdom, with nobody holding him accountable.
Image: Facebook/Zolile Xalisa

Another EFF MP has accused party leader Julius Malema of abusing the organisation's funds and running the party like his "bedroom, kitchen, toilet and yacht".

In an angry three-page resignation letter to "Dear Julius and your surrogates", low-profile EFF MP Zolile Xalisa claims Malema has been abusing the levies collected from EFF MPs and MPLs, and the party's parliamentary allowances, using the money to throw jamborees for senior members after party meetings to "appease your guilt".

Xalisa further alleges Malema has refused to account to the EFF central command team (CCT), its highest authority between conferences, on how the R427,000 collected from EFF MPs and MPLs in monthly levies has been spent. Xalisa served on the CCT.

Last week, another EFF legislator, Thembinkosi Rawula, resigned publicly after failing to secure a position on the party's list of candidates to parliament. He, too, alleged that Malema abused EFF funds.

Xalisa is No 73 on the EFF's list of preferred candidates to the next parliament, which reduces his chances of returning to the legislature in Cape Town unless the EFF achieves significant growth in next month's election. His detractors said he is disgruntled about this, but he denied this, saying: "There is nothing special about being an MP."

Upon his resignation, Xalisa was welcomed as an ordinary member of Mzwanele Manyi's African Transformation Movement.

In his letter, Xalisa also alleges that Malema made members pay from their own pockets for weekend party activities.

"You used the EFF money in whatever way you deemed fit without consulting any of us, you threw parties whenever you feel after our meetings trying to appease your guilt of EFF money consumption by sharing the crumbs of it with EFF CCT members just to make them feel important around you, when you are just doing [it] to appease your guilt," Xalisa writes to Malema.

Julius Malema and his wife, Mantwa Matlala, have joined the ranks of one of SA's most exclusive clubs.
News
2 years ago

"The little we could have appreciated at least if you were taking care of our deployment costs instead of guillotining [us] with exorbitant … weekly deployment cost, such as car hire, accommodation cost, buying T- shirts for EFF fighters and providing food for fighters at our own cost. If that was not abuse and exploitation, you will never know what is abuse and exploitation in the EFF."

Xalisa says Malema runs the EFF like his personal fiefdom, with nobody holding him accountable for expenditure related to his allowance and an allocated credit card.

EFF spokesperson Mbuyiseni Ndlozi said Xalisa was lying because he had been placed further down on the party list to parliament.

"He too did not make the cut in the EFF parliament list of candidates. EFF branches democratically rejected him. He now joins a very short line of position-mongers who, because they lost positions, lie about the EFF."

The EFF has poured cold water on claims made by former central command member Thembinkosi Rawula that party money was mismanaged by Julius Malema and ...
Politics
2 years ago

Mother and housewife Bianca-Lee Grossett, 39, has traded her sheltered life of white privilege for a red EFF beret, challenging race politics in ...
News
2 years ago