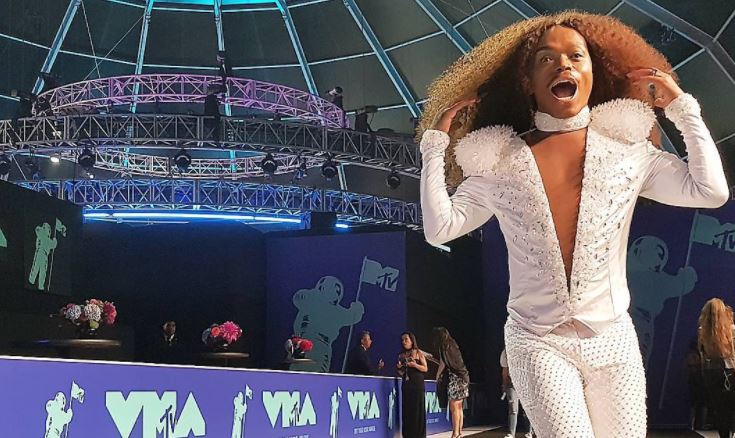 Somizi let out his inner Diana Ross this past weekend when he hosted the red carpet for MTV Base Africa at the MTV Video Music Awards in LA on Sunday.

The Idols SA judge hit the carpet in a white jacket that showed off his chest like a rockstar. The piece was complemented with glittering white fur collar detail and a neck accessory.

Speaking about his eyebrows and makeup in an Instagram Live video, Somizi joked that it was fresh enough to "bring our land back".

The outfit was designed by local fashion wizard Anita Ferreira, who has previously designed outfits and hats for the likes of Boity and Basetsana Kumalo.

Anita said the outfit was the product of hours of sweat and tears and paid tribute to Somizi's adventurous spirit.

"Your adventurous personality is both exciting and creative. You push me to places I thought impossible. You are by far the most exciting and daring client. (Fellow designer) Jess and I cried tears while making this but it was worth every tear, hour, broken needle and sleepless night when I see it on you! " Anita wrote in an open letter to Somizi on Instagram.

Speaking to TshisaLIVE Anita said that Somizi told her he wanted a "show stopper". So she interpreted his initial ideas to create a Ice King outfit made from Swarovski crystals.

Just hours before he took to the carpet, Somizi was lighting up the streets of LA. Even riding a BMW i8- just like he does back at home.