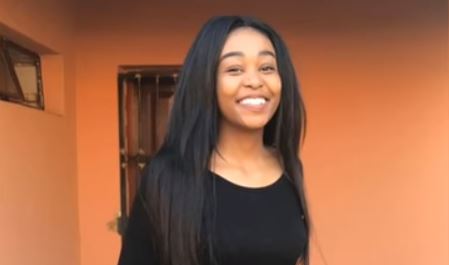 Skeem Saam fans couldn't believe their eyes on Tuesday when one of the show's most popular characters Eunice Nkadimeng notified her crush that from now on she would be his girlfriend.

The student, played by Limpopo-born actress Oratile Maitisa, had her eye on Emkay (played by Mlungisi Mathe) and decided to take her shot. With nerves of steel, she told him that she decided to be his girlfriend and that was that.

LEADERSHIP✊🏽. She didn’t wait for him to ask her out, she just made a decision by herself, then broke the news to him😂😂😅. Teach us!!!🔥#SkeemSaam pic.twitter.com/xDaQ3PyKBr

Soon Twitter was filled with hilarious memes and jokes about the incident, with some praising the young student, while others claimed she was too forward.

Hebanna diantsha mos. So maybe I should also tell my crush that I'm tired of crushing on him I now decided to be his GF like Eunice did. 😂😂😂 #SkeemSaam pic.twitter.com/x9WpDGyF38

"I've decided to become your girlfriend"
Eunice is showing yall girls how it is done 😂😂😭 #SkeemSaam pic.twitter.com/O2UUo9BS5N

Viewers were also amused at how Eunice sealed the deal with a kiss, which left Emkay as still as a statue and as silent as a stone.

Langa Mavuso: Music is how I say what I need to

Langa Mavuso's rise to fame has been a learning curve that has taught him how much of himself to give to people, saying that he prefers to let his ...
TshisaLIVE
4 years ago

Mmatema Moremi is well on her way to making a name for herself despite her Idols SA runner-up status and she's told TshisaLIVE that part of her ...
TshisaLIVE
4 years ago

Zakes Bantwini: I'm not interested in competing on small stages

Zakes Bantwini's journey in music has seen him go through the most and at his hardest point he was pushed to make music for his survival. In an ...
TshisaLIVE
4 years ago

After receiving "countless" requests to go shake her booty in America, SA dancer Zodwa Wabantu is set to give the states an eye-full when she tours ...
TshisaLIVE
4 years ago

Dj and music mogul Oskido has seen it all in his nearly three decades in the music industry, mentoring some of the biggest names in SA music, and ...
TshisaLIVE
4 years ago