They even want Ma Ribs on the program 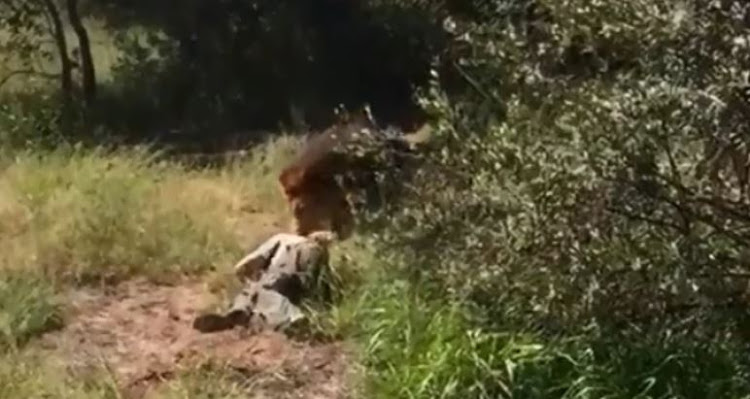 Dearly beloved, we are gathered here today to mourn the passing of Shamba the lion, who died after mauling the owner of a private game reserve in Limpopo over the weekend.

The owner of Marakele Animal Sanctuary, Mike Hodge, sustained injuries to his neck and jaw and is currently recovering in hospital after the attack. But his family confirmed to TimesLIVE that the lion had died in the incident.

Meanwhile the social media streets were flooded with tears as mourners cried over Shamba's death.

And, of course, Black Twitter remained undefeated with hilarious jokes and tributes to Shamba.

#RIPShamba
Bought a packet of Simba Chips yesterday, they just didn't taste the same😔. I can't believe that Shamba is gone😭😭

I will never look at R50 the same way. Rest in power comrades✊✊ #RIPNelsonMandela #RIPShamba pic.twitter.com/0opCx6DfjD

Shamba legacy will live on 😢😢😢
Brave soldier, a fighter, strong , always goes for what you wanted, you were a go-getter. You showed great commitment to getting the land.
There can only be one you. Live on..#RIPShamba pic.twitter.com/6SGOAX0flw

Shamba had a promising rap career ahead of him 😢, his manager @djkhaled has offered to pay for all funeral related costs 👏#RIPShamba pic.twitter.com/B2LjRgorur

#RIPShamba The death of comrade Shamba Shambarise has touch many South African, he has been killed for fighting for the land. pic.twitter.com/QE1LzhXv8Y

The death of our beloved Shamba has left a hole in my heart that no hungry lion meal or simba chips can fill.

I’ll never forget the day you came to visit us in braam, it was a memorable day 💔😭 #RIPShamba pic.twitter.com/mGarQh14q8

Ma, the people of Mzansi are looking for a sign!

Shamba, the Ranger cabal is here! Even those who sent you to the brutal sanctuary in our stolen land are here!! What’s funny Shamba is that they’re crying the loudest, more than us who cared for you #RIPShamba pic.twitter.com/S5p5IkGYbi

They are here Shamba trying to replace you already..... give us a sign Shambaristo 😢😢😢😢#RIPShamba pic.twitter.com/RP4Z5diQEz

"Papa, those who were hunting your relatives with rifles from Land Rovers, they are here. They have the heads of your brothers and sisters on their walls; their skins as carpets. You never told us how we should treat them. GIVE US A SIGN PAPA"#RIPShamba pic.twitter.com/cSnW8ISzNu

#RIPShamba
We need to know Baba, were you fighting for the land baba? Give us a sign of how to continue Baba Shamba pic.twitter.com/PNQEzriHZV

Even those shouted to bring a rifle and those who pretended to cry while closing the fate for your killer, they're here Shamba please show us a sign. #RIPShamba pic.twitter.com/3K7BqksO6o

When the shock has subsided, it is time to plan a memorial and a few brave souls put their hands up and volunteered to help with the service. You know, print programmes, speak, sing songs and bring vetkoek and samoosas.

Programme can be enhanced with images and the likes pic.twitter.com/u3KxWTy8bX

It was decided that the dress code will be all-black (or lion print) and Ma Rebecca Malope will be one of the speakers.

In honour of our fallen hero #shamba let us all wear this on Friday. #RIPShamba 😢😢😢..Hero's become myth#Amandla #LandExpropriation #Hero #lionofjudah pic.twitter.com/zyW7rtR0iY

The day Shamba died should be declared as the National Holiday to honour him and his legacy. #RIPShamba #ShambaMemorial. pic.twitter.com/D4DxuPzMeH

Eish! Even Tira joked about writing a song for the fallen hero.

Can i compose a song in respect of Shamba 🙏 #RIPShamba chikichichaaaaaaaaaaaaaaa

Would you forgive someone who murdered your husband, just because you were Christian?
TshisaLIVE
4 years ago

WTF Kanye?! Slavery was a choice? Whose? How? Like njani?

The Queen | Cleo's wig was snatched! Yes she was fighting, AGAIN

If you're going to fight, make sure that weave is tight fam. Issa weakness!
TshisaLIVE
4 years ago