‘Am I using your grant money?’ Somizi hits back at criticism of him always buying Mohale super expensive gifts 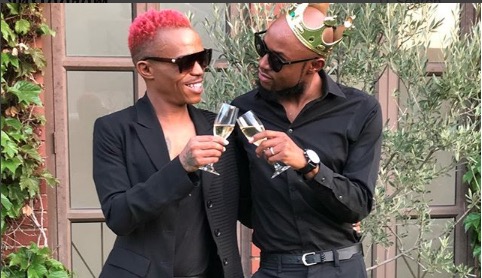 Somizi claps back after tweep accuses the star of being a 'one-sided' lover.
Image: Instagram/Somizi Mhlongo

Idols SA judge Somizi has again put a troll firmly in their place, telling them to mind their own business this week after hubby Mohale was accused of never spoiling his bae.

We all love a good clapback from the Somhale power union, and this week the couple came under fire from a tweep who claimed that Somizi is a one-sided lover.

The criticism came as Mohale posted a pic of a Gucci bag, alongside the caption: “Gifts from hubby. Thank you, bae.”

The critic asked when Mohale would start gifting Somizi.

Somizi hit back at the troll on Twitter, telling the user to stop being dumb.

“Kunani am I using your Sassa grant? Until I do, stop asking stupid questions,” Somizi said.

kunani am I using yo sasa grant.....until I do stop asking stupid questions

This isn't the first time Somizi has been scrutinised for his lavish gifts to Mohale.

Earlier this year, the Dinner at Somizi's star gifted his hubby a diamond ring for his 25th birthday.

Trolls dragged the pair, saying that posting the moment was too soon after the death of Somizi's mother, actress Mary Twala.

The star posted a video to address the criticism.

“It's my husband's birthday today and also my mother's farewell. We laid my mother to rest, and I didn't know what to do, how to present this. I decided to carry on and got him this,” he said in the video.

Somizi hits back at claims Vusi Nova should 'come out'

"How many people should come out for people to be comfortable with themselves?"
TshisaLIVE
1 year ago

Somizi shocked by lockdown weight gain: 'It's not muscle, it's fat'

Somizi is back at the gym to get fitter than ever!
TshisaLIVE
1 year ago