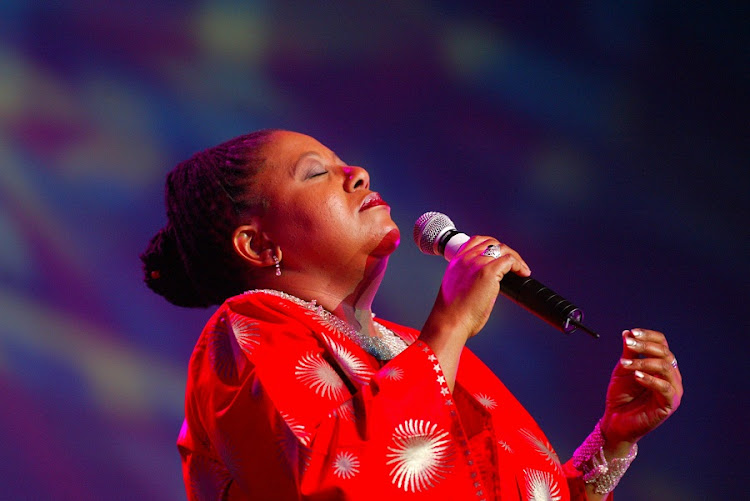 Sibongile Khumalo has died at the age of 63.
Image: Reuters/Mike Hutchings

The family of iconic jazz singer Dr Sibongile Khumalo has on Thursday evening confirmed that she died of stroke related complications.

"It is with great sadness that we announce the passing of Dr Sibongile Khumalo our iconic, world-celebrated South African singer, affectionately known as Ma’Mngoma (24 September 1957 – 28 January 2021).

"She will be missed by all who had the privilege of experiencing her music, her friendship and her love. Dr Sibongile Khumalo succumbed to stroke related complications after a lengthy period of illness. The family is grateful for the support and prayers during this time," read part of the statement.

Jazz veteran Sibongile Khumalo has died at the age of 63, reliable sources close to the situation confirmed to TshisaLIVE on Thursday evening.

Details surrounding Sibongile's death were still unknown as an official statement from her family is pending.

A close friend told TshisaLIVE he was still trying to make sense of the news and was devastated.

He asked not to be named as he preferred that an official statement first be made by the star's family.

Khumalo made a profound impact on SA and the world during her career. Before her illustrious discography and accolades, the Sowetan-born star had her beginnings as a music teacher who dreamt of becoming an opera singer.

Her decades-long singing career touched the hearts of thousands across Mzansi. Her hits such as Mayihlome and Thula Mama became household names, and her songs took her to the top of the radio charts. She was also known for her award-winning opera and concert work.

She performed for distinguished audiences at events such as late president Nelson Mandela's 75th birthday. She lead the New Zealand and SA national anthems at the historic 1995 World Cup rugby final.

Khumalo was awarded the Order of Ikhamanga in Silver by the presidency for her "excellent contribution to the development of SA art and culture in the musical fields of jazz and opera".

Sculptor Pitika Ntuli on making art out of ancient bones

Like every one of us, the origins of a virtual art exhibition that will be the showpiece of this year’s National Arts Festival can be traced back to ...
Opinion & Analysis
1 year ago

Living legend Sibongile Khumalo will be performing at the Lyric Theatre to celebrate Freedom Day and her two decades in music. Long revered as being ...
TshisaLIVE
9 years ago

Artists, Sibongile Khumalo and Keketso Semoko have unveiled a new body to help female-led businesses. The South African Businesswomen in the Arts ...
TshisaLIVE
11 years ago