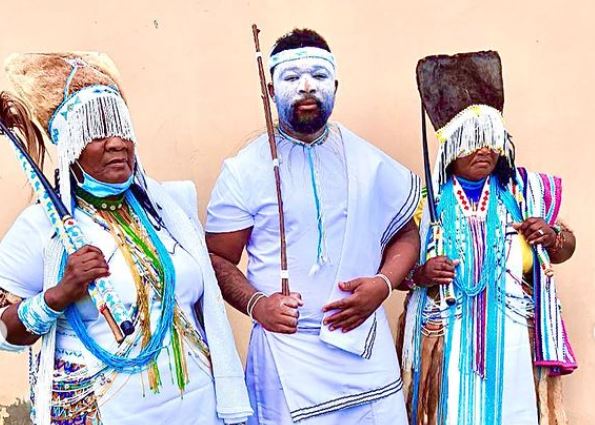 Months after revealing that he was going through initiation school for training to become a fully qualified sangoma, former Nyan Nyan host Luyanda Potwana has shared an update into his journey.

The TV host recently earned more stripes as a traditional healer and he took to his Instagram to share the news and pictures captured on the day he graduated.

Check the snaps below (swipe left)

Eight months ago,  the former Nyan Nyan presenter Luyanda Potwana lifted the lid on why he chose to keep his decision to answer his ancestral calling away from the spotlight until now.

“You know me as a SA television host. However, this is a side of me that is unknown to the public. My ancestral spiritual calling. After all, I am my ancestors — and my ancestors are me.

“I kept this away from social media, not because I was ashamed of it — I just wanted to walk the journey quietly. However it is now time to reintroduce me.”

Speculation around him being a sangoma began a few months earlier when some viewers spotted him on several occasions on TV wearing white beads around his neck.

The beads are mostly worn by Izangoma, or people born with spiritual gifts.

‘This is the end!’: Luyanda Potwana announces his exit from Nyan Nyan

"I close the Johannesburg chapter a proud man — having fulfilled my dreams."
TshisaLIVE
8 months ago

Luyanda Potwana enrolls at the University of London at age 39, after completing his grade 12 studies two decades ago.
TshisaLIVE
9 months ago

"I kept this away from social media, not because I was ashamed of it – I just wanted to walk the journey quietly. However it is now time to ...
TshisaLIVE
1 year ago