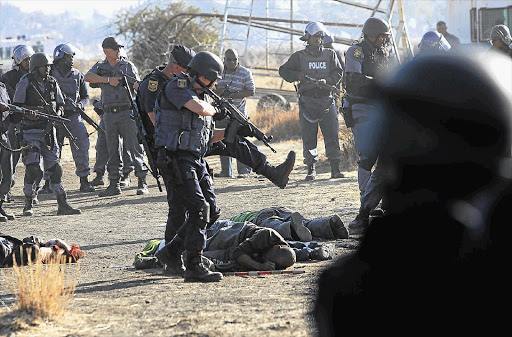 The Marikana mine massacre will go down in history as one of the worst human tragedies in South Africa after 1994.

South Africans are used to hearing about horrible killings by brazen criminals who roam our streets.

This time the perpetrators are the police, who are supposed to keep the peace and protect our citizens .

Workers have a right to strike.

It may be argued that union representatives had more than once requested that they disperse while wage and labour negotiations were under way.

It may also be pointed out that the workers carried dangerous weapons, such as pangas and sjamboks, but that does not give the police the right to open fire on the crowd.

Their priority would probably be to call press conferences and announce that the workers were the first to open fire on the officers, and that the police had no alternative but to defend themselves .

I do not doubt this.

However, no matter what excuse the authorities use, there can be no legitimate reason for the appalling behaviour of the police.

The National Union of Mineworkers is a principal member of Cosatu.

Both must now take up the cudgels on behalf of the slain workers and their grieving families, as well as the plight of the scores of wounded workers.

The NUM must call an emergency meeting with Cosatu to discuss mass workers' retaliation against the government department responsible for the police brutality.

Cosatu must now flex its muscle and show the ANC and SACP that its partnership in the tripartite alliance does not mean toeing the line when the ruling party has no control over its police officers.

Cosatu is the only organisation for which the ANC will shiver and shake.

It must threaten the alliance that workers will willingly give permission to it to break away and form its own workers' political party.

What will the ANC do without the mass support of the working electorate?

The Marikana massacre is a repeat of other notorious tragedies such as June 16, Sharpeville and Boipatong.

The only difference is that this massacre happened in the post-apartheid era.

Today the next generation of workers is still suffering under ANC rule.

The government has lost its sensitivity to the plight of the poor.

Fat cats and power-hungry politicians are preaching: "Together we can do more." But what they are showing is: "On our own we can steal, plunder and kill more."

Mthethwa and Phiyega must resign with immediate effect.

They were powerless to stop the massacre. The SAPS was totally out of line .

The country can ill-afford such negative publicity.

COME on, unions. Please consider the consequences of a more than 300% salary increase demand in the recovering world economy?

Lonmin has lost almost 8% of its equity value, and who knows how many investors have been scared off.

How many potential jobs have been lost?

Should our mining industry be sunk by strikes?

The abandoned mines would probably be purchased by Chinese resource-hungry companies.

What would this do to our economy and the value of the rand?

Please only demand reasonable working conditions and inflation-based increases, or we simply cannot compete in the ever-shrinking global economy.

Even if your demands are met, inflation will skyrocket, making everyone poorer.