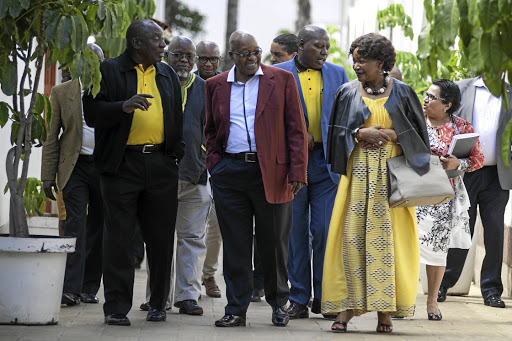 In many self-respecting democracies anywhere in the world (there aren't that many of those left, sadly) Zuma would have resigned and taken time off to fight the extremely detailed 783 counts of bribe-taking and racketeering against him. If he did not resign, the leadership of his party would have pulled the plug on him.

What's exhausting is that Zuma will not resign and the ANC's national executive committee will not lift a finger against him.

A crime suspect will stay at the scene of the crime, the Union Buildings, and all 55million South Africans are supposed to sleep soundly at night.

We know that Zuma will not resign because he has captured the National Prosecuting Authority and that institution will continue to stand by his side as he tries to wriggle out of getting what he has repeatedly called for: his "day in court".

Despite the utterances of the Mineral Resources minister, the succession battle in the ANC is far from decided
Ideas
3 years ago

Having asked for that day in court, Zuma finally has a chance to clear his name. Yet he won't take the chance because it is now clear, with Schabir Shaik prepared to testify in such a case, that he will leave the dock and walk straight to the cells.

The guilty are afraid and that's why Zuma has abused the legal system so abominably in the past 12 years.

On Friday, immediately after the Supreme Court of Appeal dismissed the application brought by Zuma and the NPA to overturn a High Court judgment ordering that corruption charges against the president can be reinstated, the party's secretary-general addressed the ANC's veterans conference.

He asked for their "wisdom" on how to handle the Zuma matter.

One has to wonder why he seeks wisdom now when he stood by Zuma as the man faced the very same corruption charges 10 years ago - and was gifted with 60% of the votes at the ANC conference in December 2007.

Why are the 110 men and women of the national executive committee of the ANC not calling Zuma in and ordering him to  step aside or resign immediately as ANC and South Africa's president? It is because ages ago Zuma realised he had to capture every institution and structure that could possibly lift a finger against him.

The reason this crime suspect could hop from Zambia to the Democratic Republic of the Congo and then on to some politically inconsequential region of Nigeria without worrying about events back home is because he knows that the NEC will not and cannot touch him.

The NEC is divided and powerless. The ANC is now on auto-pilot, with its secretary-general Gwede Mantashe reduced to making statements that no one listens to or even bothers to adhere to. For example, just a few weeks ago, the structure warned the Zuma-supporting KwaZulu-Natal provincial leadership that it must not appeal against the High Court judgment rendering it (the provincial executive) unlawful. Sihle Zikalala, the KZN ANC chairman, went ahead and appealed anyway - with Zuma's encouragement.

The NEC, the highest decision-making body of the party between conferences, could do absolutely nothing about his decision. Elsewhere across the country, regional and provincial leaders are launching legal challenges. Mantashe begs them to stop and they continue anyway. These junior leaders know there is no longer any leadership except one: Zuma. He thrives in the chaos they create.

There are no saints in this extremely dirty war that's unfolding within the ANC.
Ideas
3 years ago

Just how much damage will Zuma wreak in the state and his party in the next few weeks up to December 16 when the ANC conference starts?

In the past few months ANC presidential hopefuls have criss-crossed the country
giving fatuous speeches about "unity" and values. They have not addressed the real question facing their party: what will they do to heal their divided, powerless party if Zuma even allows them to ascend to the presidency in December?

The ANC has been fraying and dying since December 2007 when Zuma took
over. In December it is clear that he will hand over to his preferred successor or to an opponent a party that has lost any kind of influence or control over its members. It is in disarray.

Crucially, it is a party that is fast losing the respect, love and support of the people of South Africa.