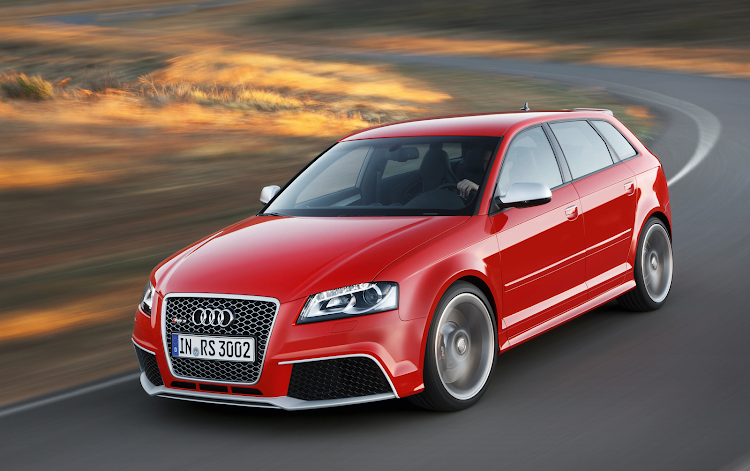 The purchase of a 2012 Audi RS3 was anything but smooth sailing.
Image: Supplied

What he received instead was a vehicle with significant underlying engine issues — warranting repair work at a cost that eclipsed the value of the car.

He purchased the 2012 model with 60,000km from an authorised dealership, Audi Centre Durban, a decision he believed would offer peace of mind over its history. In addition, a one-year remainder of its Freeway Plan maintenance agreement had been in effect, which he extended for an additional year at a cost of R20,000. Money well spent, considering what was to come.

Issues began even before the car was in his possession. On the day he arrived at the dealership to pay his deposit and sign documentation, he was told the RS3 was not yet ready, as certain parts were being awaited. “So [I was] disappointed, however, satisfied, I got a courtesy car.”

Two weeks later, he collected the vehicle. But it had yet to be licensed: a service included under the label of “on the road” fees charged by most dealerships. He took the vehicle with temporary registration papers that, when expired 21 days later, resulted in him receiving a R1,000 fine.

He called the dealership. “I was told fines from my side were holding up the issuing of the vehicle’s licence in my name.”

Then, he called the licensing department, where an adviser explained that though he had two outstanding fines, these would not prevent the issuing of a licence disc. He paid the fines and called the dealership again — who told him the disc would still not be issued. Three days later, the matter was resolved. By this time Temlett already felt a sense of unease. “I feel like I [had] been lied to the whole time, hearing excuse after excuse.” It was only the beginning of his problems with the RS3.

He found niggles he believes ought to have been detected during the 80-point check promised by the dealership. The vehicle was booked into Audi Centre Durban to address his concerns, among which was the gearbox. He had also asked for a printout of the service history, a request that was denied.

“I seem to recall they flushed [the transmission] with new oil, a week later it was still the same, so to cut a long story short, it was replaced under the maintenance plan. By this time, I also noticed the vehicle was using a high amount of engine oil.”

He called Audi Centre Durban again. He was advised to take the RS3 to the Pinetown dealer instead, as it was closer to where he lived. According to Temlett, the service adviser at Audi Centre Pinetown “almost fell off her chair,” after calling up the service history he had asked for. It was a three-page document.

Included on the list was proof that Audi Centre Durban had replaced the pistons in the engine in 2015, among numerous other jobs. “None of this was disclosed to me. according to the [report] R477,000 worth of warranty repair work had been undertaken at that time.”

He decided to escalate his grievances with the customer relations department at Audi South Africa, who contacted Audi Centre Durban and arranged a meeting with Temlett and the used car sales manager. Temlett proposed: either return and be refunded for the vehicle, or have an additional year of Freeway Plan at the expense of the dealership, to “gain confidence that the vehicle will not give any more issues once repaired”.

The sales manager said he would look into the matter. He subsequently left the employ of the dealership. “Still trying to get to the bottom of this car and what Audi Centre Durban [was] prepared to do, I continued on the repair path with Audi Centre Pinetown, where they [were] now checking the high oil consumption.

“After much back and forth with the factory in Germany, Audi Pinetown were advised to replace the engine block along with another set of pistons.”

This rendered the vehicle out of commission for eight months, during which time Temlett was provided with a courtesy car.

In November 2019 he received the RS3. His woes were not yet over. An oil leak would lead to a startling revelation in the saga: the head that houses the valvetrain, bolted atop the engine block, had been welded. He surmised, “some technician [had] obviously damaged the head previously and instead of replacing it, which would have had to been paid for by the dealership, they welded it instead to save costs”.

“This weld repair goes completely against factory standards and the vehicle was still under the maintenance plan.”

According to Temlett, the discovery led to a back and forth between Audi Centre Durban and Audi Centre Pinetown, with either parties blaming each other for the lapse in workmanship quality.

By February 2020, he said he was “stuck between the two with the car leaking oil in my driveway, so bad that the cabin fills up with some if we attempt to drive it.”

At that point, the Freeway Plan had expired, though the work on the engine block still carried a one-year guarantee. Which meant that until either dealership owned up to the fault, he would not be able to take the vehicle to an independent garage, or he would lose the warranty.

Also, during this time, he had filed a complaint with the Motor Industry Ombudsman of SA (Miosa).

On April 2, a disillusioned Temlett reached out to TimesLIVE Motoring. First, we approached Miosa. On April 8 we received a response from the organisation stating, it “went through the case and there is some information that needs to be obtained in order to assist with the investigation”.

A spokesperson said that “the case is more complicated than it seems” and “a recommendation will not be made” by the time this article would be published.

On April 7 we forwarded the specifics of the case to the communications department at Audi South Africa.

The company responded this week: “Mr Temlett purchased a pre-owned Audi RS3 at one of Audi South Africa’s franchised dealers and entrusted the Audi dealer network with fixing his vehicle. We regret that the sales and aftersales interactions had left Mr Temlett frustrated. Mr Temlett’s RS3, being an eight-year old model, had numerous ownership changes before being sold to Mr Temlett. Due to the numerous parties involved over the eight-year period, it had been difficult for our dealer partners to pinpoint the exact origin of, and thus responsibility for, the problem to Mr Temlett’s vehicle. Audi South Africa’s dealers are each independently owned and managed, this had caused the resultant delay in closing this matter. The Audi brand prides itself on good customer service and has tried to find an amicable solution despite the complexity in the details. As a collaborative effort to resolve Mr Temlett’s unfortunate situation, Audi South Africa and our Dealer partners involved will work together to repair the issue addressed by Mr Temlett, as a gesture of goodwill. This is an important step to regain Mr Temlett’s confidence in the Audi brand.”

Temlett said: “It’s a pity that one has to go to these lengths to get any type of recourse, I hope that Audi SA can take something away from this so that future customers don't have the same experience, especially on a vehicle that has been fully maintained by the dealers.”

Consumer Clinic features once monthly on the TimesLIVE Motoring platform. Contact brenwin@sundaytimes.co.za if you have a story to share.

CAR CLINIC | Look before you flush your engine

Gerrit Burger explains why flushing out your car's engine with something like paraffin is probably not a good idea - especially if it's clocked up a ...
Motoring
2 years ago

Our resident mechanical guru Gerrit Burger offers advice on all your motoring maladies.
Motoring
2 years ago