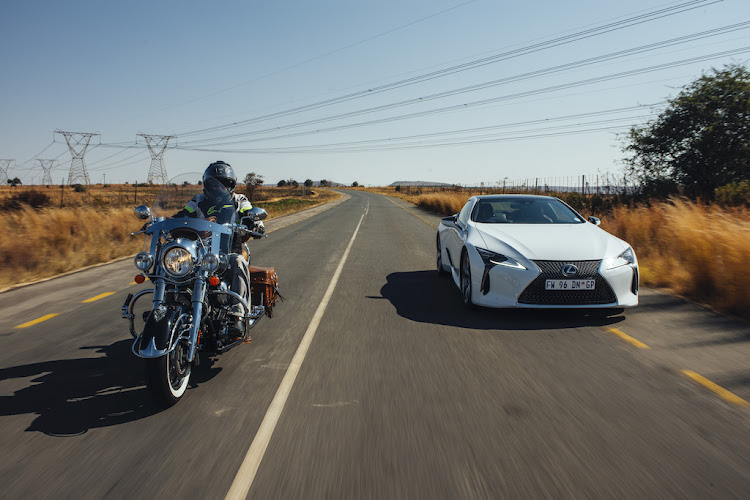 Join us as we take a gander back at some of our automotive endeavours from days gone by. This week, the time machine takes us to July 30 2017, where we held a rather different comparison involving two loud, luxurious cruisers.

At this point, we had already staged several performance duels with our motorcycling counterparts. And in all cases, the contender with four wheels lost. That includes a lap-time battle at Red Star Raceway between an Alfa Romeo 4C Spider and Triumph Street Triple R in 2016, which we replicated again later that year using a BMW M4 Competition Package and S1000RR.

Then, in February 2017, we were beaten in a drag race, pitting a Nissan GT-R against a Suzuki Hyabusa at the famed Tarlton strip. As if that defeat were not humiliating enough, our helmet-wearing rival demonstrated the supremacy of two wheels again when he pulled out the GSX-R1000 he had on the trailer.

Indeed, these Sunday Times Lifestyle Motoring vs The Bike Show shoot-outs proved that if you want to go properly, properly fast — two wheels work best. Which is why we opted for a more leisurely itinerary on this occasion ... 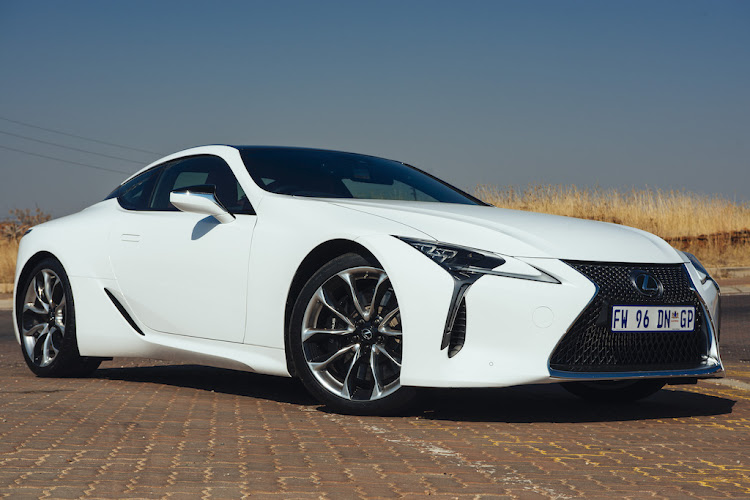 The striking Lexus LC 500 really stands out from the herd.
Image: Waldo Swiegers

By now I have resigned myself to the fact that beating our motorcycling colleagues in a conventional race is unlikely for now. Until the day we get our mitts on something that comfortably delivers sprint times in the two-second region.

So instead, I decided, rather than frivolous rivalry, we should collaborate a little to deliver meaningful consumer advice. Sort of. If you have a space in your garage for one (and-a-half) vehicles, an impressive bank balance and a yearning to make a statement as an individualist, where could your money go?

If straying away from the herd is your thing, Lexus might be a good place to start. The LC 500 is guaranteed to stand out more than any German equivalent — because a small allocation has been offered to the SA market for 2017. 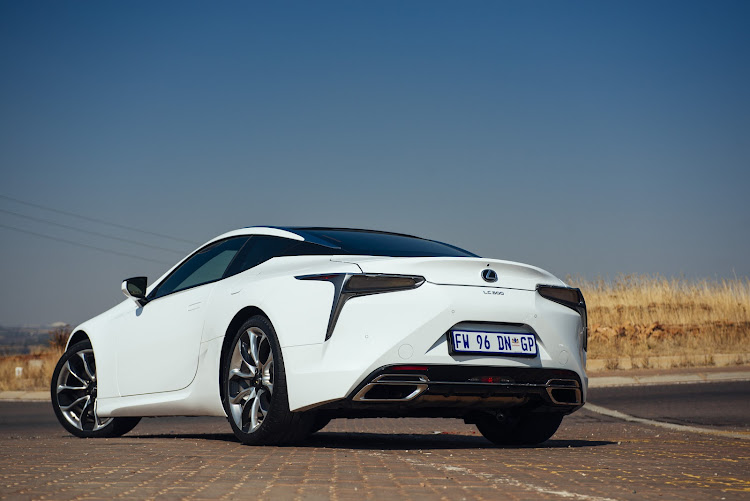 The Lexus LC 500 - exciting from any angle.
Image: Waldo Swiegers

Let me champion the motorcycle for a second ... Everyone goes for a Harley-Davidson in the touring category, so, the Indian is as left-field as it gets. There is a similarity to the Japanese coupé in that regard: both are a distinctive and rare sight on local roads. And like the two-wheeled machine, this is endowed with a surfeit of look-at-me embellishments.

From those striking chrome wheels to the unique, sharp-pleated styling. And it sounds the business. Even Mat conceded that few things are as inspiring as a normally aspirated V8. And boy, did he chuckle as the tachometer needle bounced off the limiter, before I snatched the next cog. Although Lexus touts the sporting ambitions of its LC 500, the model errs more on the grand tourer side of life. Nothing wrong with that.

On the open road, with the windows slightly open and the sunshine up high, life is sweet from behind the wheel of this exuberant two-door. I must admit, life was also good from the pillion of that Chief Vintage. But those gratuitous tassels on the side are just way over the top. Can’t get the tune to The Village People’s YMCA out of my head. 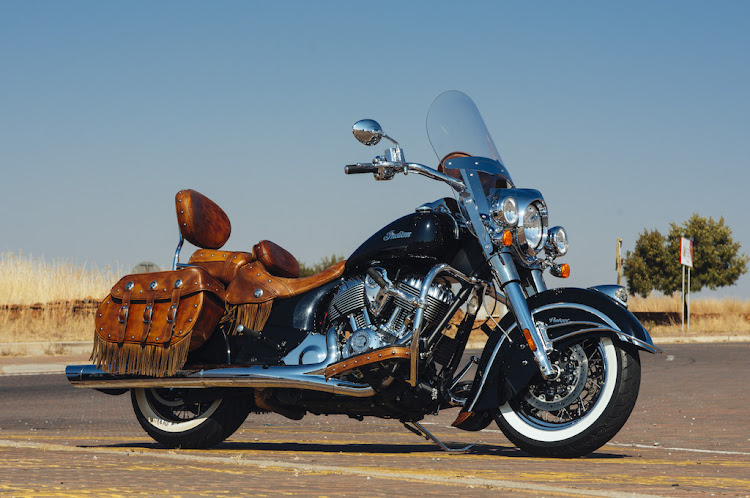 Bring something with presence, a grand tourer where the looks are just as important as the performance, he said. And it must sound the part. Brenwin seemed eager to show off his latest test car so I took the bait, pondered what sort of GT he’d arrive in and chose my bike accordingly. The Americans are great at making bikes with plenty of show, and given their obsession with big ol’ V-twins they aren’t shy with the sound either.

A Harley-Davidson seemed like the obvious choice, but I went a bit more left-field with an Indian Chief Vintage. Indian was established a couple of years earlier than Harley-Davidson, although its history has been even more checkered. Reborn thanks to US giant conglomerate Polaris in 2013, it has since made a mark with bikes like this: big, brash, noisy and yet also surprisingly sophisticated.

And then Brenwin arrived in this white, thing. A sexy GT shape with some questionable chrome accents, huge glittering wheels and a posh Toyota badge. I approved, but then that opinion had been formed before I’d even seen it. The soul-stirring growl of a high-revving, naturally aspirated V8 had seen to that, this mechanical symphony audible long before he eventually tore into view, cheesy grin visible through the tinted windows. 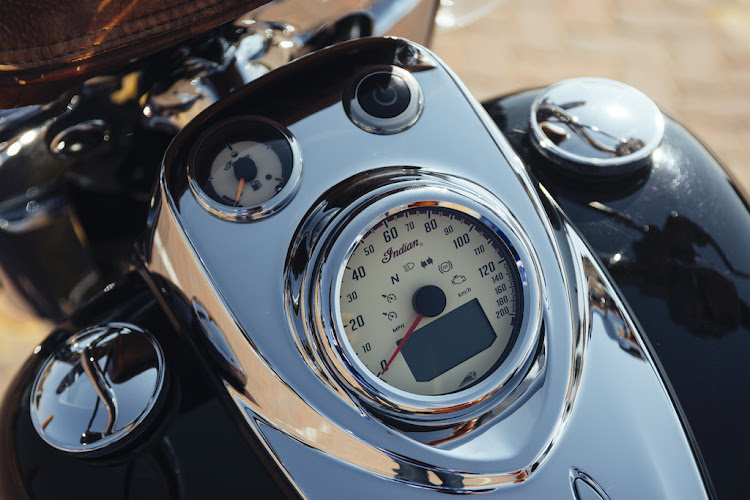 He spread his arms in a gesture hovering between smugness and gloating, the message was clear. But I’ve got tassels was all I could think to offer in reply, and though I immediately regretted the decision, it was true, and by some fluke, Brenwin actually seemed impressed.

He took me for a spin in the Lexus and it was a hoot. I’m a big V8 fan and this engine is a beauty, but I’m quite sure that it could usefully lose a handful of its 10 gears and be even better. The Indian makes do with a more traditional six-speed gearbox, and no fancy clutch either.

Swapping ratios in the LC feels like the height of technology, on the Indian it’s more like the height of the Industrial Revolution. Everything on this bike feels heavy, solidly over-engineered and built to last several lifetimes. I’m pretty confident my repressed biking colleague enjoyed his brief trip in the leather armchair Indian thoughtfully provided for the occasion.

This is a bike built to cover vast distances in the sort of comfort the owners of Indians expect from their business-class flights. The engine suits the role to perfection, hugely grunty from just above tick-over and happiest when cruising up around the 120km/h-140km/h mark. The car is impressive for sure, but if you’re talking about glitz and glamour, the Indian has it hands-down. It’s not just the tassels, there’s a glowing Indian Chief’s head on the front fender and more leather, too. And it’s not a Toyota ...

Join us as we take a gander back at some of our automotive endeavours from days gone by. This week, the time machine takes us to September 14, 2016, ...
Motoring
1 year ago

Join us as we take a gander back at some of our automotive endeavours from days gone by. This week, the time machine takes us to June 25, 2017, when ...
Motoring
1 year ago

#ThrowbackThursday: Audi RS3 vs BMW M2 vs Mercedes-AMG A45