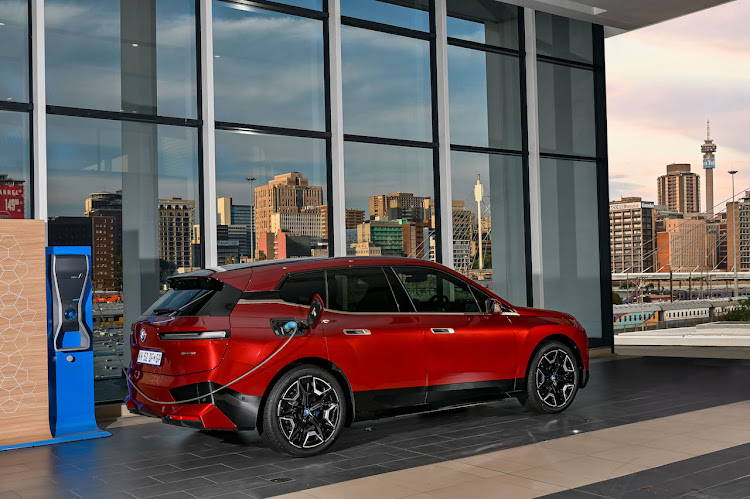 The BMW iX xDrive40 can be charged to full in under 11 hours, from a home AC outlet.
Image: Supplied

Charging a car will soon be as natural a practise as plugging in a smartphone.

With the rise in popularity of the electric vehicle (EV) genre, we thought it prudent to demystify some aspects, starting with an introduction to charging.

The most common reference to EV chargers is alternating current (AC) and direct current (DC). All EVs can convert AC current to DC, which is needed to charge an EV battery.

AC chargers control the amount of power it draws whereas DC chargers will recharge using the fastest charge rate it can. DC chargers have AC-to-DC converters built into the charging station, which is why they are more expensive and not as readily available. AC charging is considered the most cost-effective way to recharge an EV.

The maximum speed for AC charging is 22kW and the maximum for DC charging is 60kW in SA. In January 2022, Audi became the first manufacturer locally to announce it will roll out four 150kW fast DC chargers across major highways. Achieving the maximum charging speed requires certain conditions to be met.

Winstone Jordaan, GridCars MD, says DC chargers serve two purposes — speed and convenience, with current-generation chargers charging up to 200km in 20 minutes, suited for when you are far from home or doing extensive intercity travel.

A regular three-pin plug charger can deliver 3kW of power, but separate home chargers, which need to be installed by an electrician, can deliver a maximum of up to 22kW. The maximum charge rate you can get at home on single phase power is 7.4kW. If you have three phase power charging is three times faster because power flows through three conductors — the maximum charge rate would be 22kW.

Dependent on car model, charge rates are capped to either 7.4kW on single phase or 11kW on three phase. The benefits of installing a home charger is the convenience of not carrying cables around because it’s “plug and go”, leveraging lower prices at home as opposed to public charging, and waking up to a fully charged car daily, says Jordaan.

If you plan to buy an EV and it does not come with a free home charger, EVCharge.co.za sells portable, home and public EV chargers with an option to shop by vehicle brand. GridCars also offers similar solutions.

There are two types of charging plugs — type 1 and type 2. The original Nissan Leaf was the only EV to be sold in SA with the type 1 connector. Subsequently, type 2 has been adopted as the industry standard locally, in line with the EU. The type 2 is available as an AC plug and a combined charging system (CCS 2) extension on DC.

According to EV Charge, Tesla uses its own plug and ecosystem for its supercharging network in the US, but has adopted the type 2/CCS 2 standard in Europe and are expected to adopt the same EU standard for SA.

You can calculate how long it takes to charge a car by the speed of the charger and the battery capacity. If you have a 7.4kW home AC charger installed, you can recharge an iX in 10.35 hours (76.6kWh ÷ 7.4kW).

The near and distant future

The 2022 local EV landscape is set for rapid expansion with 15 models expected from Audi, BMW, Volvo, Mercedes-Benz and Volkswagen. These models will more than double the number of EVs on sale, which is the BMW i3 and iX, Jaguar I-Pace, Mini Cooper SE and Porsche Taycan.

Toyota said it will be a while before it brings EVs to SA, citing cost and lack of government incentives. At its recent state of the motor industry 2022 event, Dr Gill Pratt, chief scientist at Toyota, said there is no economical way to recycle lithium-ion batteries and they are working with partners to find a solution.

This includes making batteries keep 90% storage capacity after 10 years, finding secondary uses after it degrades (such as power backups for homes), and reducing the cost of recycling while keeping it carbon neutral.

Despite load-shedding at times, Jordaan says EVs are five times more efficient than petrol cars, and while there is some impact to Eskom, it is within their capacity to manage with the support of the smart charging systems that GridCars has developed.

As electric vehicle sales rise, the big question for power grid operators, charging companies and governments is how to run tens of millions of ...
Motoring
6 months ago

What the heck happened to self-driving cars?

Almost a decade ago it seemed all systems go for vehicles that would drive you to your destination while you took a nap, checked your email or ...
Motoring
6 months ago

The EV Supply chain has a dirty secret

Amid all the hype around clean transport, many believers have overlooked a key issue: Manufacturing these cars is a carbon-intensive process.
Motoring
6 months ago