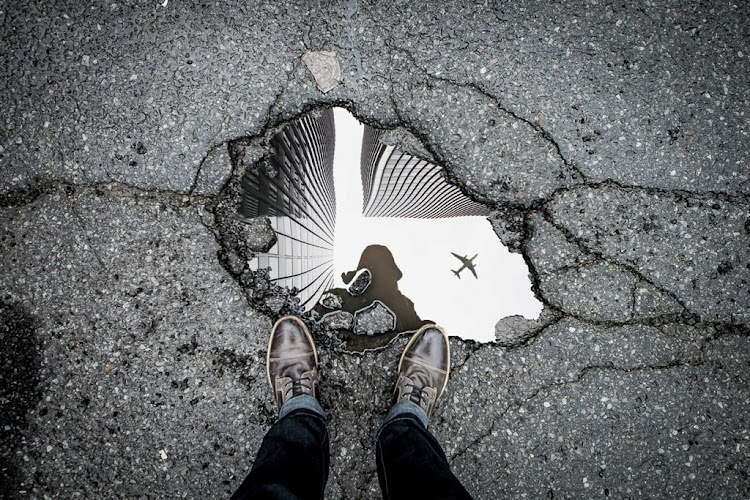 A pothole strike can have ruinous consequences.
Image: Supplied

Anybody who has made a road trip during which it was necessary to venture off the N-routes will be aware of the appalling condition of secondary and regional roads in certain provinces.

Potholes, at various levels of viciousness and destructiveness, have become as much part of our motoring landscape as the cosmos flowers by the roadside.

If you picture the sequence of events when a wheel strikes a pothole — the initial drop, the impact, the rebound and, while the rebound is still happening, the upward jolt when the wheel climbs out of the hole — it should be obvious that the components which bear the brunt of the punishment are the tyres, the rims, and the suspension, which includes, critically, the shock absorbers.

On tyres an impact from the edge of the pothole can cause the airtight inner liner of the tyre to tear loose from the carcass, allowing air to penetrate. This will show up as a bulge in the sidewall or on the tread, which will not only affect the steering, but, if it's on the tread, will soon turn into a puncture as it wears through. A tyre dealer in a pothole hot-spot reports that low-profile tyres are considerably more susceptible to damage than higher-profile ones.

Rims can be bent or cracked by a severe impact. A bent rim will be fairly obvious and should also be felt on the steering, but a fine crack may be hidden by brake dust. Any damage that interferes with the airtight seal between the rim and the tyre will cause an air leak followed by a flat tyre. The rims should be carefully examined after they have been cleaned. As a general rule, steel rims are preferable to cast aluminium ones on potholed roads — they are cheaper and more resistant to cracking and often repairable when bent.

The suspension system comprises of springs, control arms with pivot pins mounted in elastic bushes, struts with ball joints and rotating top mounts and shock absorbers, either incorporated into a strut or mounted separately on silent, resilient bushes. This is where the potential for damage from potholes becomes scary. Tremendous shock loads are imposed on ball joints, top mounts and bushes when a sizeable pothole is struck at speed. These are tough components, but shock loads of this nature must inevitably shorten their service life.

Shock absorbers are probably the most vulnerable suspension parts. The basic hydraulic telescopic shock absorber consists of a cylinder containing hydraulic fluid in which a piston (attached to a rod) can move by forcing the fluid through openings restricted by valves. Up-and-down oscillations of the piston rod will be damped by fluid friction in such a device. This is used to quell the oscillations which springs want to make after sudden compression and release — think of a mass piece bobbing up and down on a light coil spring.

By connecting the bottom of the fluid cylinder to the wheel which would otherwise bounce up and down, and the end of the piston rod to the car body, the unwanted bouncing will be curbed. For this reason a shock absorber is often called a damper. The valving inside the fluid cylinder can be arranged to make the damping relatively soft during compression (allowing a soft counteraction to a bump) and relatively stiff during extension (strongly counteracting rebound, which on early cars could throw you out of your seat).

Besides damping spring oscillations, a hydraulic damper will also offer resistance to excessive deflection of the wheel during the initial spring compression. Thus a worn damper will result in more frequent contact with the rubber “bump stops” on the suspension. The jarring effect on springs when this happens is decidedly unhealthy.

Hydraulic dampers rely on precision seals on the piston and valves for their operation. These seals slowly wear through abrasion during sliding and also lose their elasticity, especially as fluid friction creates heat in a hard-working damper. That is why shock absorber manufacturers recommend periodic replacement. Potholes hasten their demise.

The best way to limit pothole damage (if you must traverse a potholed road) is to ensure that tyre pressures are to manufacturers' specifications, keep your speed as low as constraints of time and schedule allow and learn to scan the road ahead. Try to avoid striking a pothole while swerving — if a strike is unavoidable, rather take it straight on.

I would recommend raising the vehicle on a hoist as soon as possible after a pothole ordeal. Get in under it with a light and check the tyres and suspension for visible damage. Have the wheel alignment checked. If it's suddenly altered, something has been damaged. Look for signs of fluid leakage at all dampers. Besides changes in the car's handling, which may require acute perception to detect, leaking dampers are the best indication of failed or failing shocks.

The shock absorber “testing machines” found in some tyre dealers are notoriously unreliable, as is the time-honoured method of bouncing a corner of the vehicle and watching the rebounds.

CAR CLINIC | Everything you need to know about drive belts

There are several problems with synthetic, rubber-like drive belts on an engine. The first is that, if left to their own devices, they will ...
Motoring
4 months ago

CAR CLINIC | Understanding and caring for your car's tyres

People who go in for long-distance hikes will tell you their single most important piece of equipment is their shoes. The same applies to a ...
Motoring
6 months ago

Batteries are mysterious things. For 100 years they have been fitted to motor cars, yet they are still poorly understood by the average owner.
Motoring
7 months ago