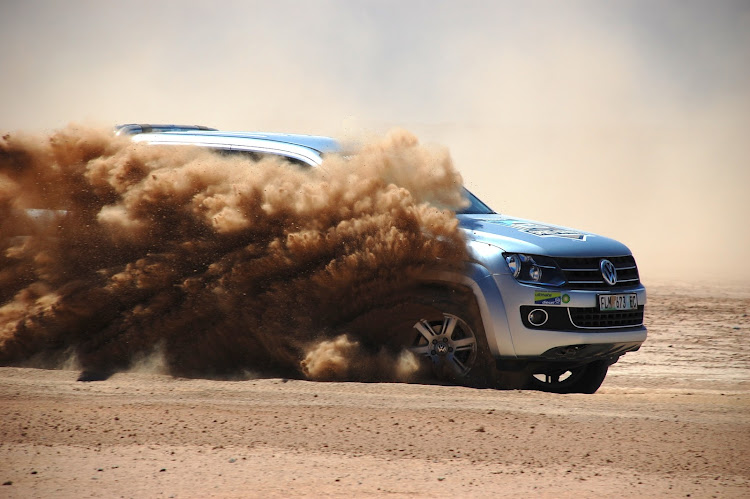 A Spirit of Africa Amarok kicking up dust in the middle of the desert.
Image: Thomas Falkiner

The year 2010 was a different time. Print was king and the internet existed purely for looking at pixelated cat videos. Some of us might have mucked around with blogs, but on the whole this motoring journalism thing was something of a lark, if I’m being honest.

While my peers struggled with the realities of corporate micromanagement, yours truly literally had to meet two deadlines a week: columns for newspapers stuffed with enough mobile communications adverts to ensure a healthy profit share payout come December. Yeah, back then the carefree days seemed like they would never end. Neither did the press junkets, which more often or not had the habit of spiralling into questionable bouts of nocturnal debauchery.

Like that time out in the desert with Volkswagen for the now defunct Spirit of Africa: a 4x4 competition that attracted bush-hardened Namibians who never wore shoes — not even at night when the scorpions came out. A people-watcher’s dream, these macho combatants were slugging it out against similarly tough South Africans for R50,000 in prize money — a princely sum back in those days. This was the penultimate stage, and for some reason Volkswagen thought it a scrummy idea to invite us motoring scribes to take part in the adventure in our own Amaroks. 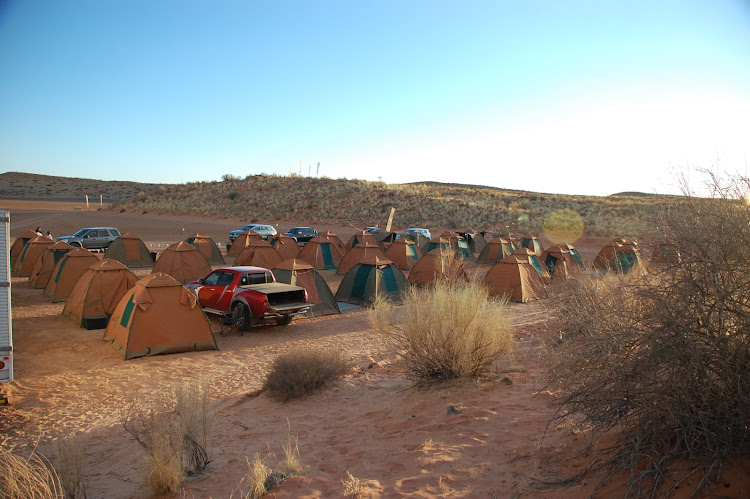 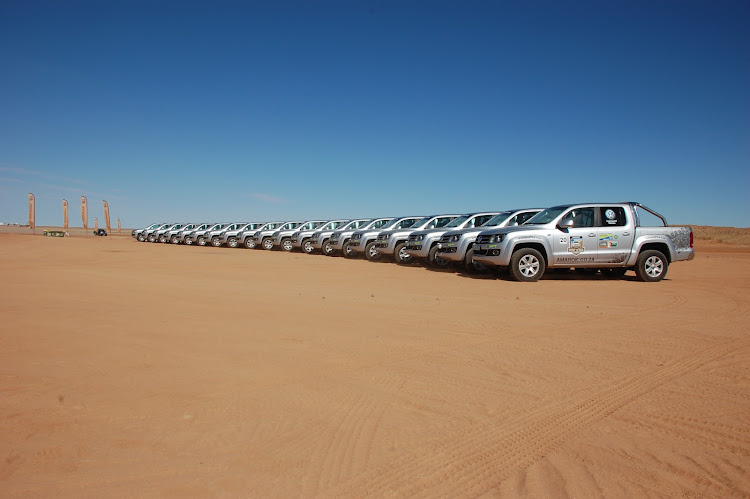 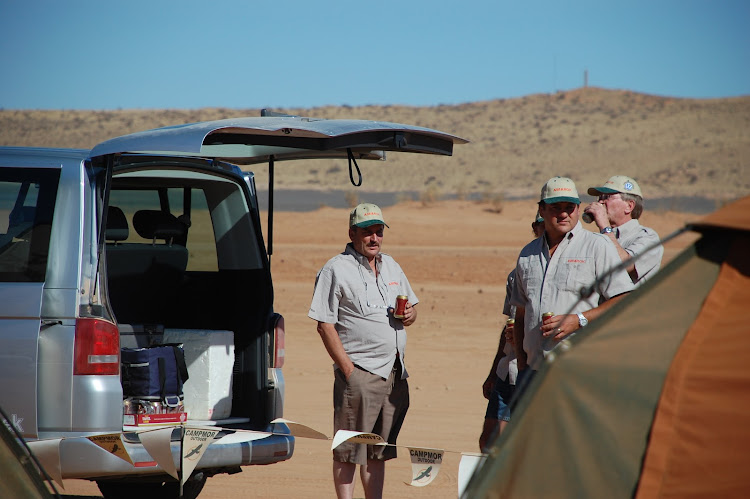 We arrived the day before in the middle of nowhere. I had fallen asleep in the air-conditioned comfort of the shuttle bus shortly after leaving Upington airport and had regained consciousness in an arid wasteland unlike anything I had ever seen before. We could have been transported to the badlands of Iraq for all I knew.

As the shuttle disappeared in a cloud of dust, the PR team presented us with a kit bag of swag for our stay: a sleeping bag, hurricane lamp, pillow and basic toiletries. Like a platoon of fresh grunts arrived at some distant army outpost, we were shown to the campsite erected behind the shelter of a large drift.

While one member of our party donned a pair of running shorts and disappeared back down the access road, the rest of us sniffed out the bar because, you know, what else are you going to do in 30º heat with no cellphone reception? Problem was that said bar was already occupied by one Sarel van der Merwe, the legendary SA racing driver who Volkswagen had hired to choreograph the event.

A demon behind the wheel, Sarel (aka Supervan) thrives on holding court in situations such as this – usually with a strong beverage and a generous stock of cigarettes – with entertaining and seemingly endless tales of his on- and off-track exploits. The off-roading contingent loved it and so did we. Fueled by this atmosphere of high machismo and a rugged locale that resembled something out of the frames of a Sergio Leone flick, everyone spent the evening around a fire pit — drinking and laughing with the bravado of Old West cowboys. 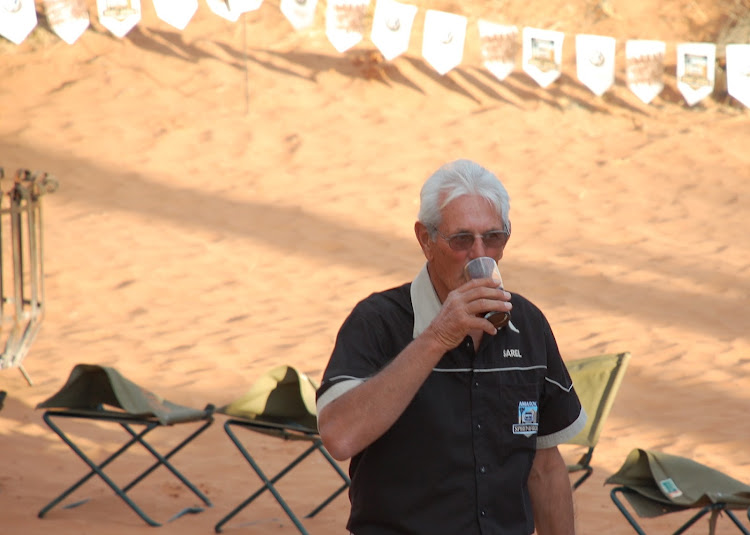 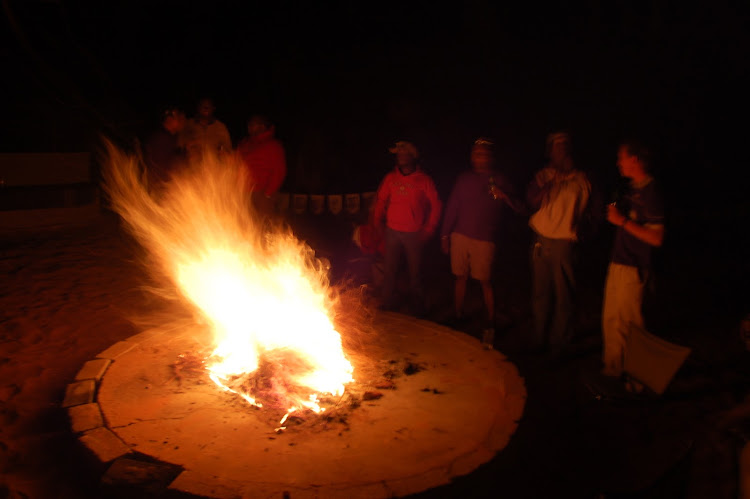 After some time, it must have been around midnight, the media element had largely been left to our own devices as the more serious members of this desert posse had slipped off into the shadows and retreated to their sleeping bags, eyes on the prize. Even the fire was starting to yawn but we were having none of it. Although the pile of sekelbos had long been depleted, we staggered up a nearby dune and proceeded to pull and tug at woody reeds that for some inexplicable reason were wired into the ground via complex and stupidly long taproot systems.

It was worth the effort (numerous trips were made) because when introduced to the embers, they lit right up and kept the party going. Eventually, however, even I had enough. Especially after another unopened bottle of brandy materialised from the inky black ether. So I disappeared, hid inside my tent and woke a few hours later to an ice-pick headache and the news that Oom Sarel was on the warpath as some “idiots” had taken it upon themselves to rip up and burn a unique and protected plant species the night before.

Of course he knew who was responsible. And if he didn’t, his suspicions were confirmed when we arrived for the drivers briefing looking as pale and drawn as the desert. 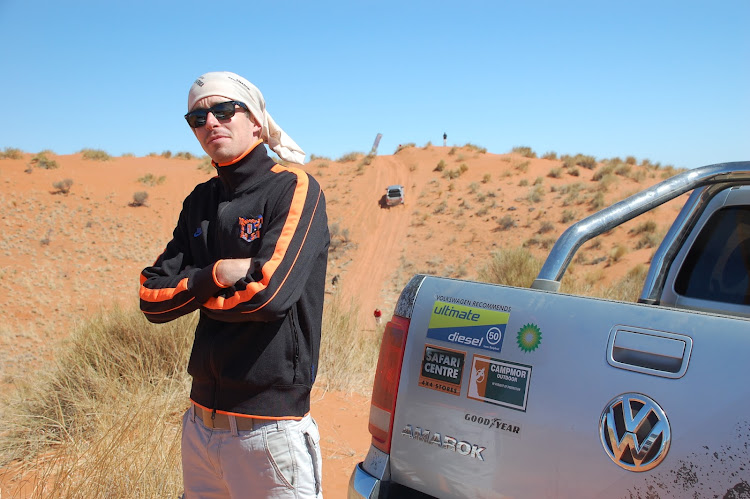 The author putting on a brave face the morning after.
Image: Supplied

We were in a world of pain and things weren’t going to get any better as our blunted reflexes saw us fail spectacularly in every one of the day’s challenges. Whether fluffing up relatively simple gymkhana courses to getting stuck at the foot of those steep and sandy ascents the Namibians seemingly levitated over, our behind-the-wheel prowess was about as embarrassing as our previous night’s antics.

Eventually the sun hung low over the western horizon and it was time to join the slow convoy back to base — exhausted and thoroughly defeated. Intent on having one last laugh as us buffoons, Van der Merwe takes to the radio comms for a final twist of the knife.

“Who wants to hear a joke?” he asks through his walkie-talkie. A few unidentifiable voices crackle back that they do.

After a few seconds of silence, he inquires cooly: “So, did you hear about the motoring journalists who could drive?”

Cue an explosion of anonymous snorts and guffaws from the tiny speaker of our Motorola.

Later back at camp the gang reconvened at the scene of the crime, where the day’s winners was gifted with a cask of locally distilled mampoer that was quickly distributed to all of those present. Apparently it was pretty good but none of us were around to try it.

Manufacturers are setting the limits progressively higher as the years trot by. When I refer to limits I’m referring to that magical envelope where ...
Motoring
11 months ago

Most established motoring journalists have long-term test cars. I had one once. It was a 2013 Honda CR-Z and it arrived at my office with 200km on ...
Motoring
1 year ago