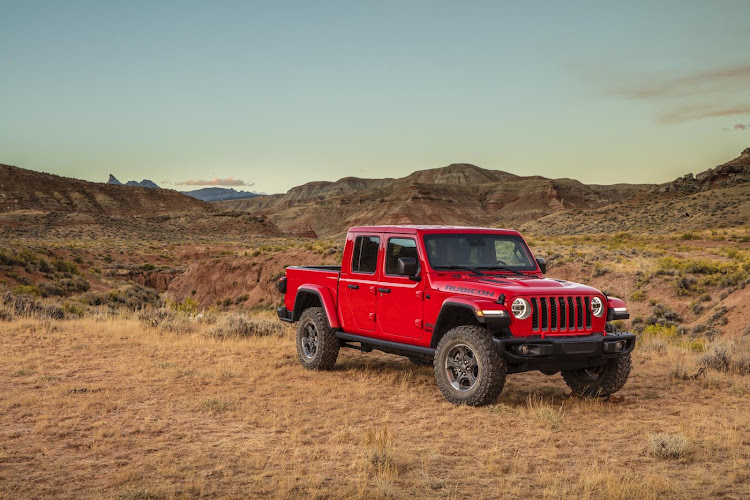 The new double-cab has presence in spades.
Image: Supplied

The past few years have been kind to those with a penchant (and pocket) for high-end, double-cab pick-ups.

Back in 2017 Volkswagen rewrote the leisure bakkie rule book when it shoehorned a creamy 3.0 V6 TDI into the front of its Amarok. Mercedes-Benz tried to make a dent in the market with the ill-fated X-Class – which also wielded a six-cylinder power source.

Ford took a somewhat different approach to the creation of its double-cab flagship. While the outgoing Ranger didn’t pack more in the displacement department, it featured extensive under-skin enhancements, allowing it to surmount just about any obstacle, while offering peerless ride comfort. 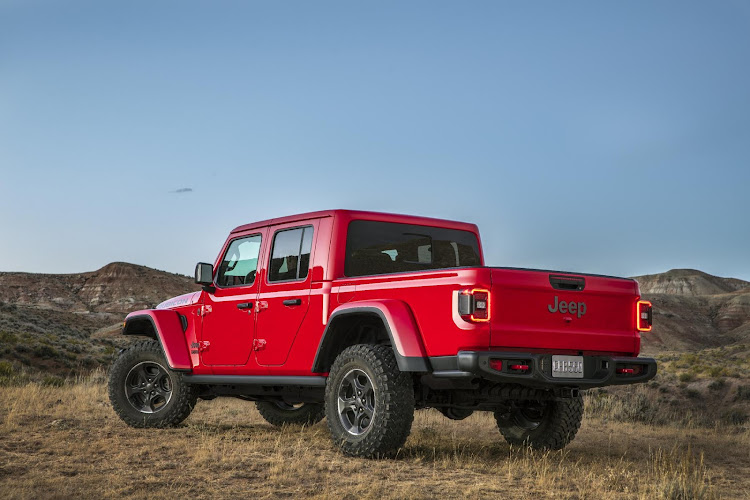 Now Jeep has a contender in the space: the hotly-anticipated, Wrangler-based Gladiator has finally arrived in the country, priced at R1,259,900. It is only available in Rubicon specification.

This isn’t the manufacturer’s first rodeo in the pick-up arena. It dabbled in the genre as far back as 1947. Its last contribution was the Comanche, built between 1986 and 1992, based on the Cherokee platform.

While Jeep has credible bakkie heritage, it doesn’t want buyers to think of the Gladiator as a commercial vehicle. This is a strict leisure-focused offering, it claims, designed to support adventurous lifestyles rather than haul bricks. 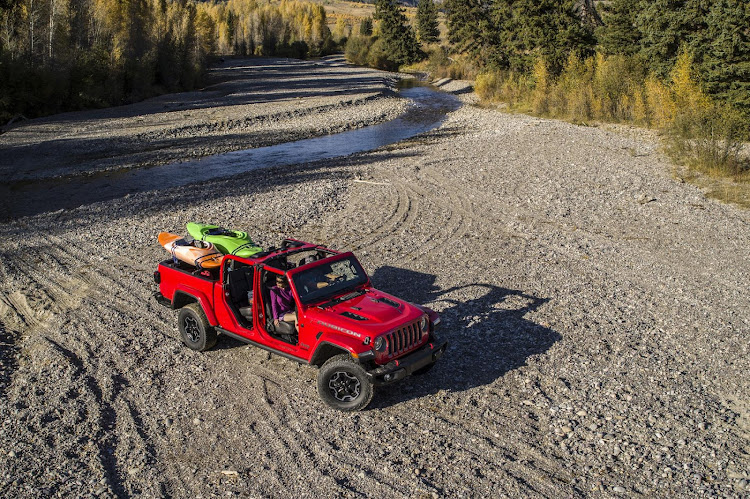 Removable top and doors – just like the Wrangler.
Image: Supplied

Stylistically it’s quite easy to see the Gladiator is a direct descendant of the Wrangler, itself a modern incarnate of the military-bred Willys MB. All the classic hallmarks are there, from the seven-slot grille to the upright windscreen, exposed door hinges and open-air potential. Yes, the Gladiator lays claim to being the only convertible bakkie in production. Its soft-top is manually-operated, peeled back with relative ease after unfastening two simple clips. As with the Wrangler, you can remove the doors for an authentic at-one-with-nature type of experience.

The interior is a blend of new-world technology and rugged simplicity. Materials are decidedly premium in texture, with soft touchpoints you wouldn’t want to expose to the harshness of nature, despite the Jeep’s outdoorsy nature.

Its 8.4-inch infotainment system runs on the fourth-generation instalment of the brand’s UConnect operating system. supporting Apple CarPlay, Android Auto, as well as comprising its own navigation system. Gripping the chunky (heated) steering wheel and sitting high up in one of the Gladiator’s leather-wrapped seats, occupants are empowered with a commanding feel. 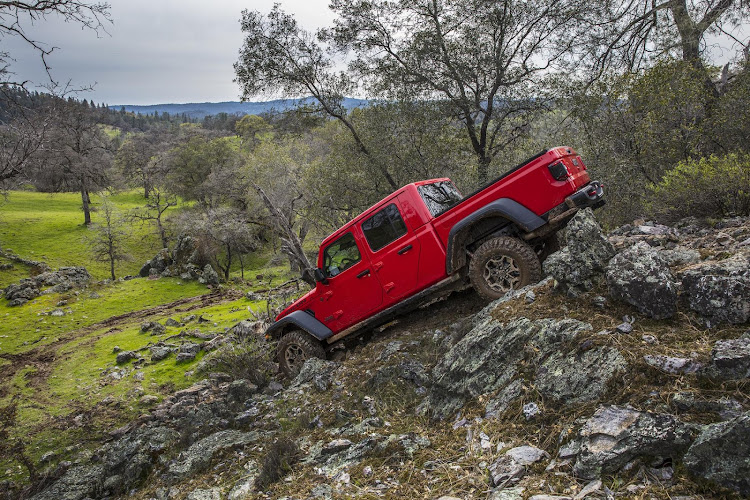 Off-road supremacy is still a part of the deal.
Image: Supplied

They would be advised to manage expectations when it comes to road manners, ride quality and noise insulation. In standard format the Wrangler doesn’t rate highly in these departments. The forces of physics are against it: a tall, slab-sided, body-on-frame vehicle is always going to be vulnerable in the face of cross-winds and sharp directional changes.

You can feel the air smacking against its upright front windshield and hear the intrusion of exterior bluster through the fabric top. Ripples underfoot make their way through the cabin, to be felt in the buttocks of passengers. Its solid axles, front and rear, are supported by coil springs and bolstered by high-pressure Fox shocks. However, the setup was clearly designed for maximum articulation on the rough stuff, instead of pliancy on asphalt. The steering requires constant vigilance to maintain a straight course, as its natural tendency is to wander.

It simply can’t hold a candle to the car-like emulations offered by the double-cab alternatives mentioned earlier. Ardent Wrangler fans won’t find this news – they’ll put the on-road character of the Gladiator down as an endearing virtue to be expected. Pretty much like how old Defender owners love their steeds to death, no matter how unrefined a drive they offered. 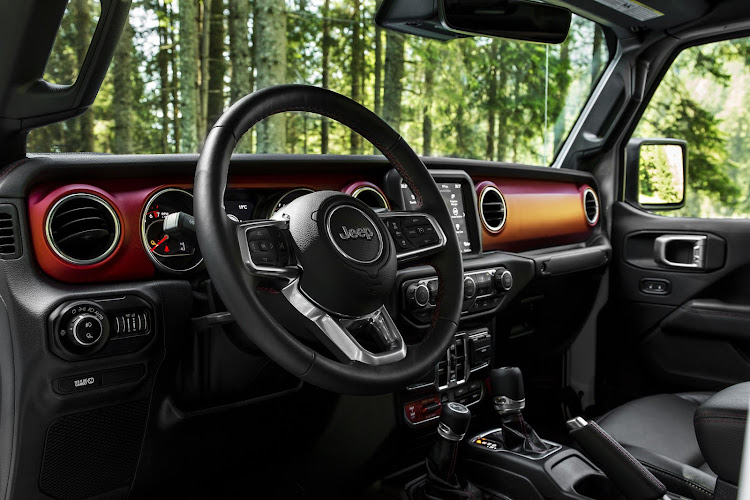 Of course, the road manners of the Gladiator are forgotten once you’ve taken that detour into the wilderness. Believe what they mean when they say it can go just about anywhere. Off-road enthusiasts will relish these factoids: Gladiator has an approach angle of 43.6 degrees, break-over angle of 20.3 degrees, departure angle of 26 degrees, a ground clearance of 249mm and 800mm wading depth. Its payload is 693kg, while a towing package enables lugging capacity of 2,712kg.

We put the Gladiator through a section of deep ruts and muddy troughs in North West. To be frank, the course barely induced a sweat from this Jeep. The same couldn’t be said for myself and co-driver though, as we both believed on more than one occasion we were seconds away from finishing upside-down.

Naturally, it is equipped with the essential hardware for true off-roading. That includes Jeep’s Rock-Track 4x4 system, a two-speed transfer case, front and rear locking differentials. The Gladiator is a hardy bundu-basher and it feels virtually indestructible in the intended habitat of the great outdoors. 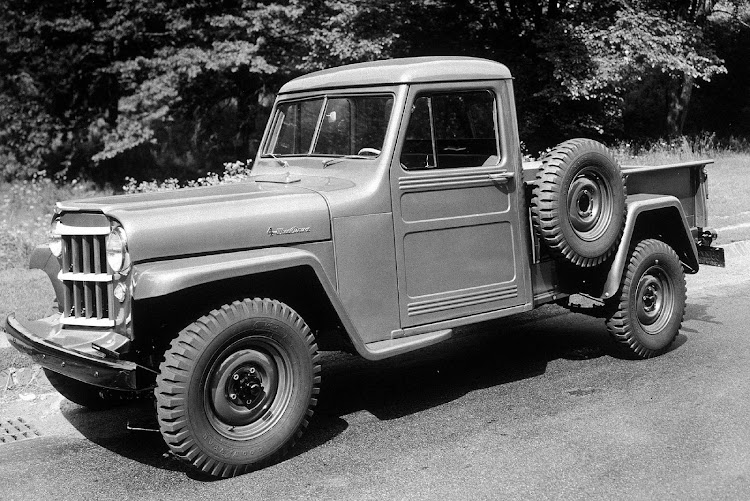 Where it all started…
Image: Supplied

There is only one engine choice available. That is the 3.6-litre, normally-aspirated Pentastar V6. It won’t win awards for aural character or expedient delivery by 2022 standards, but it is a proven mill, with more than 8.6-millionm units produced since 2010 for various products from the Chrysler, Jeep and Dodge stables.

Output is 209kW and 347Nm, transmitted via an eight-speed automatic gearbox. Foot flat, the petrol engine emits an industrial din, while 110km/h seems like the natural settling speed for the vehicle. Chasing beyond 120km/h on the open road could prove fatiguing over long distances, giving the concentration required to keep the Jeep tracking straight and true. No diesel options are available locally – chalk that down to fuel quality, partly, as well as the company’s ongoing drift from diesel technologies. The V6 provides sufficient grunt for low-speed, obstacle-crushing crawling activities. But if towing is on the agenda, one speculates the torque output of the engine could fall short of requirements.

Making casual morning chat ahead of our launch drive, the company’s representatives claimed a little over 100 units of the Gladiator were brought in so far. Obviously, they won’t be chasing the volumes of traditional double-cab rivals. Instead, it’s easy to image the Gladiator as a wild card alternative to a Land Rover Defender or Mercedes-Benz G-Class.

By now most of the heavy-hitters in motoring have made grand declarations about their future electric plans. Product portfolios without so much as an ...
Motoring
2 months ago