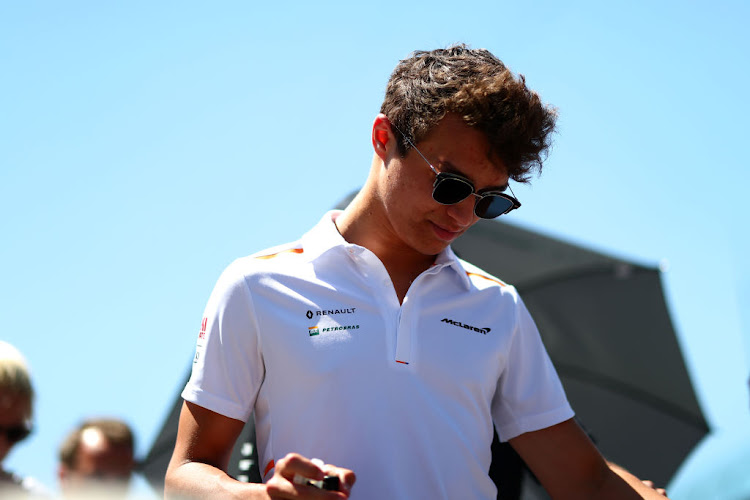 Formula One rookie Lando Norris greeted the announcement of his McLaren contract extension on Tuesday by saying he might buy himself a suit. And maybe a smart shirt as well.

The 19-year-old, Britain's youngest-ever grand prix driver, has been impressive in his debut F1 season while remaining remarkably unfazed by it all.

He was certainly not about to run wild with the fruits of his success.

"The only thing I really need to try and buy is a suit; I don’t have a suit," he said on a track day with the team when asked what he might treat himself to.

"Just a normal suit. And a shirt. I don’t really have a suit and shirt. Sometimes I think I should (wear one)," the teenager added.

"The only thing I have is a tuxedo, which McLaren got. I think sometimes maybe I should dress smarter. But apart from that there’s nothing I have my eyes on."

Norris is a youngster completely focused on his racing, both real and virtual, and with very little time or inclination for anything else.

A multi-millionaire's son with simple tastes, Norris lives in an apartment near the team's Woking factory and has a simulator in his living room.

The McLaren sports car in his garage mostly stays there, with a regular Renault his more usual runabout. His basic wages, in the range of £400,000 (roughly R7m) a year, are likely to remain unchanged.

"Personally I don’t think so much about any of the contract stuff," he said of his confirmation alongside Spanish team mate Carlos Sainz for 2020.

"It’s good news that I’m going to be here again next year but at the same time it wasn’t something I was worried about or pushing for or anything. It wasn’t like I needed the confidence to be able to drive better.

"I was having good fun, I was relaxed. I’m not going to act any differently to what I was. I wasn’t nervous, like ‘am I going to be here next year?’ or anything," he added.

Confidence is not something Norris is short of, and nor is a playful sense of humour.

He and Spaniard Sainz, still only 24 but on his third Formula One team after Toro Rosso and Renault, get on remarkably well while Norris has also cultivated a jokey image on social media.

Fans have been known to approach him with cartons of milk, asking him to autograph them, after he opened his fridge and explained his love of the dairy product on social media – earning him the nickname 'Milkman'.

Silverstone this weekend will be his first British Grand Prix as a Formula One driver and he will be one of three home racers on the grid, along with five-times champion Lewis Hamilton and Williams rookie George Russell.

Hamilton will get most of the attention but Norris can expect plenty of support as well after a season that he acknowledged had started better than he expected.

In Australia, in the season-opener, he qualified eighth and finished 12th. Since then he has started as high as fifth, in Austria last month, and taken a sixth place.

"I wasn’t expecting that," he said. "I didn’t expect anything at all. I wanted to see how it was going to go. I would say it’s gone better than I anticipated. I’m very happy with how I’ve done so far.

"But there’s still a lot of progress I need to do and make until I’m where I should be."

Endangered British Grand Prix at Silverstone looks set to stay on the Formula One calendar with hopes rising that a new deal will be announced before ...
Motoring
2 years ago

Horner on Gasly: The harder he tries, the slower he goes

Underperforming Frenchman Pierre Gasly is in need of a mental reset, says the Red Bull team boss.
Motoring
2 years ago