Why Brad Binder has the cojones to become a MotoGP champion 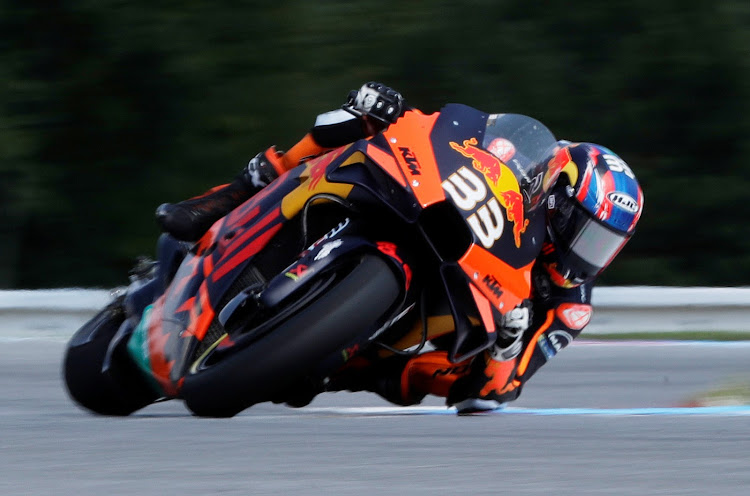 Brad Binder’s words, told to me in a December interview while he was back home in SA, stuck in my head as I watched the closing laps of last Sunday’s Czech MotoGP in Brno.

He’d been answering my question about his seeming big-match temperament, where I’d noted that in the career-climbing Moto3 and Moto2 racing categories he tended to go for wins rather than settling for a safer second or third place.

Binder had concurred, saying he’s probably willing to take more risks than some riders. Our December story ran with the headline “I’d rather crash than finish second” and I was wondering if that line might come back to haunt him as I joined legions of nervous South Africans watching Sunday’s battle of Brno.

Having qualified seventh, the Red Bull KTM rider was chasing down race leader Franco Morbidelli’s Petronas Yamaha after picking off one rider after another as he made his way to the front.

“That’s enough Brad,” one was compelled to plead as he snatched second place from championship leader Fabio Quartararo and set off after Morbidelli who had built a lead of 1.5 seconds.

“Morbidelli’s too far ahead, just stay on the black stuff and settle for a podium finish; that will be a remarkable feat in itself.”

But that, as I was reminded this past Sunday, isn’t how Brad thinks and the kid apparently has no fear. He kept pushing that KTM to its twitching and sliding limits, seemingly always just on the edge of disaster — and with his last two races still fresh in the memory.

Two weeks before Brno he’d crashed out of the Andalusia MotoGP in Spain while pushing hard to make up time after a first-lap bump with KTM Tech3’s Miguel Oliviera that had dropped him to the back of the field.

The Sunday before that at the same Jerez circuit, in his debut MotoGP race, Binder finished 13th after pushing too hard and running into the sand trap midway through the race.

But things like that apparently don’t get inside Brad’s head. Past disappointments are consigned to the recycling bin and it’s all about the next target; the rider ahead has to be passed. It’s the way champions think, and Brad had already proven his big-match temperament by winning the 2016 Moto3 title and finishing runner-up in last year’s Moto2 championship. 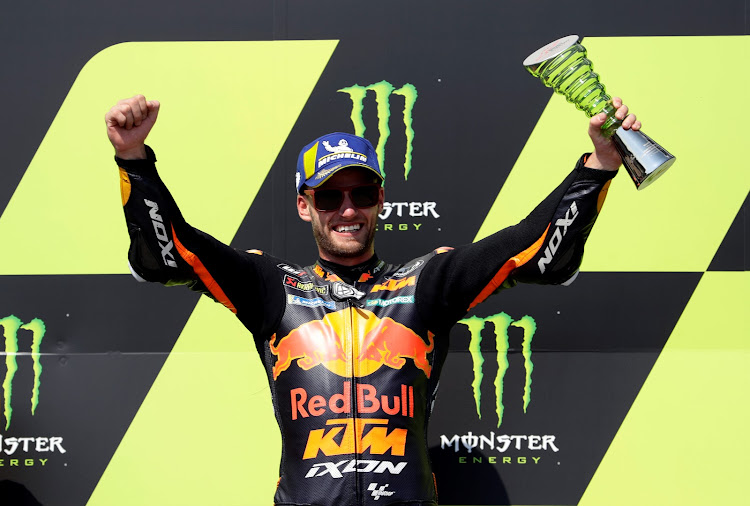 The South African anthem was heard for the first time on a MotoGP podium. Picture: REUTERS

Now, racing against giants of the sport like Valentino Rossi, finishing a safe second in Brno wasn’t on the cards as Binder hauled in Morbidelli and then dealt with him in one decisive overtaking move. But he wasn’t finished; he kept pushing that squirming KTM to the limits even when he didn’t need to. It takes big cojones, as the Spanish say.

When the chequered flag was finally waved after what must have seemed to South African fans like the longest nine laps in history, Brad crossed the line 5.2 seconds ahead of second-placed Morbidelli. He didn’t just win, it was a demolition.

Of such stuff are champions made.

It was a career-defining moment for Binder who made history by being the first South African to win a MotoGP, in just the third race of his rookie season. He also brought KTM their first victory in the top-tier class.

Seeing him being congratulated on his slowdown lap by legend Rossi and then standing on the podium with the South African national anthem playing were lump-in-the-throat moments, and not a bad birthday present, with Brad turning 25 two days after the race.

After a short bask in glory it’s back to work, and the weight of expectation will be on the young gladiator’s shoulders in this weekend’s fourth round in Austria, home of his KTM team.

It’s his rookie season and more mistakes are likely to follow, but he has set his marker as a proven race winner and, more importantly, a fearless mindset.

In our December interview Binder peppered the conversation with his favourite line: “True story”. Always with a smile. He had the confident swagger of a young man with the world at his feet.

Brad’s story didn’t have the makings of a fairytale after he’d been near the back of the grid in his early tests on the MotoGP bike. It was a completely different beast to the less powerful Moto2 machine he was used to, and he’d need time to adapt his riding style.

Asked what his goal was for his first season of MotoGP, Brad told me he was trying to go in without any.

“If you think about things too much, for example being in the top 10, and you don’t make it, it stresses you out and makes you do your job worse. I’d just rather do my best and see what happens.”

What happened was that the MotoGP rookie claimed his first win in just his third race. True story.

Czech mate! ‘This was a dream I had when I was a little kid’

KTM rider Brad Binder was at a loss for words after claiming his historic maiden MotoGP win in the Czech Republic.
Motoring
1 year ago