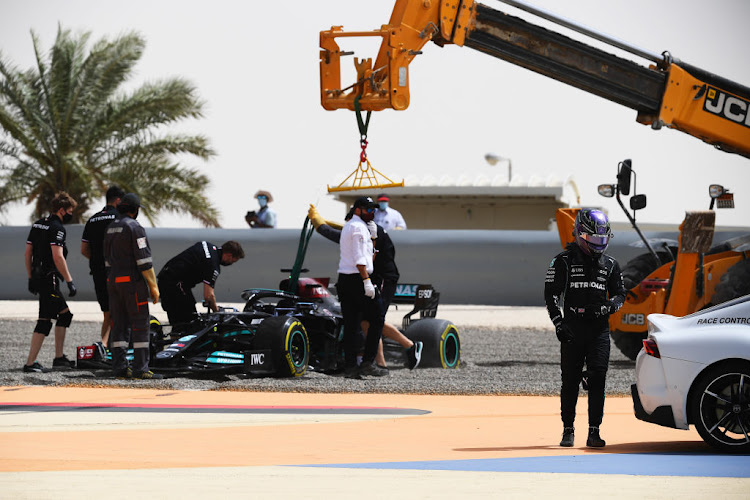 Lewis Hamilton of Great Britain and Mercedes GP makes his way to the race control car after stopping on track during day two of testing at Bahrain International Circuit on March 13 2021.
Image: Clive Mason/Getty Images

Mercedes Formula One boss Toto Wolff has likened his team's troubled preseason testing in Bahrain to “finding a hair in the soup”.

Champions Mercedes were hit by a gearbox problem on the opening day that limited their track time.

Seven-times world champion Lewis Hamilton, who spun into the gravel on Saturday and brought out red flags, and Finnish teammate Valtteri Bottas both said the car's handling needed improving.

“Pre-season testing is always exciting because you always find the hair in the soup, things that are not good,” Wolff told Formula One television.

The Austrian defended his team's decision not to carry out a filming day “shakedown” of the new car before testing started, and said there was no complacency.

“The shakedown if done in the right conditions allows you to understand a little bit more but our failures in the first days were not down to doing or not doing a shakedown,” he said. “We will crunch the data, try to understand where we performed well and where not, where we had good correlation to our simulations in the (wind) tunnel and where not.

“It's like sleeping overnight on an idea. The next day you wake up more intelligent.”

Mercedes have won the past seven drivers' and constructors' titles, an unprecedented feat, but completed fewer laps in testing than rivals.

Formula One teams wrapped up three days of pre-season testing in Bahrain on Sunday with Max Verstappen fastest for Red Bull and AlphaTauri's Yuki ...
Motoring
10 months ago