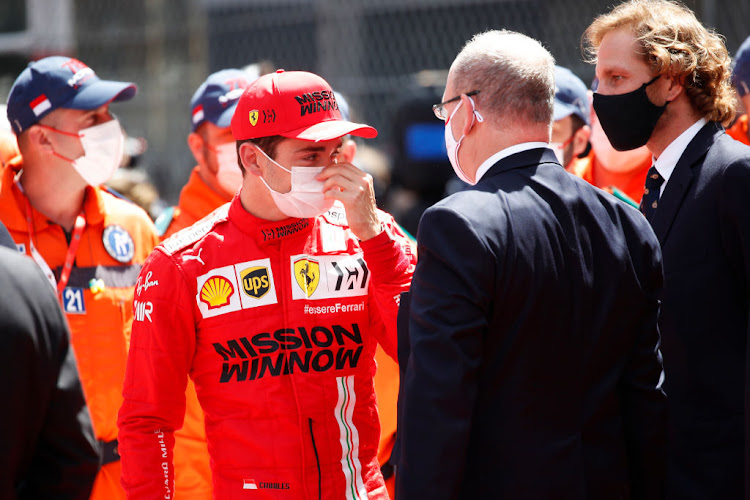 Charles Leclerc of Monaco and Ferrari talks with Prince Albert of Monaco after discovering that he could not start the race during the F1 Grand Prix of Monaco at Circuit de Monaco on May 23, 2021 in Monte-Carlo, Monaco.
Image: Sebastian Nogier - Pool/Getty Images

Charles Leclerc's Monaco jinx struck again on Sunday as Ferrari's pole-sitter retired from his home Formula One grand prix before the start due to a problem with his car.

Ferrari said in a statement it had detected a left driveshaft problem that was impossible to fix in time for the race.

The 23-year-old had qualified on pole position in the principality after crashing in the final seconds of the session, bringing out red flags that prevented any of his rivals from doing better.

Leclerc has yet to finish his home grand prix, with the showcase harbourside race not held last year due to the Covid-19 pandemic.

He retired after collisions in 2018 and 2019, and also failed to finish two Formula Two races there in 2017, but had been hoping to become the first home winner since Louis Chiron in 1931.

“Now I'm getting used to this feeling here unfortunately. I've never finished a race here and this year I don't start it ... it's a difficult one to take,” Leclerc told Sky Sports television.

“I also feel for the team. The mechanics have done such a hard job yesterday to try and check everything and they were finally a bit happy this morning to see that everything seems fine. And then this happens.”

The immediate concern after the crash was for the car's gearbox, with a replacement triggering an automatic grid penalty.

The gearbox was given a clean bill of health by the Italian team on Saturday and again on Sunday, however, before the driveshaft problem emerged.

“I'm pretty sure it's correlated with my crash yesterday,” said Leclerc.

“In the garage it was very difficult to feel OK.”

The late drama raised questions of how Ferrari had failed to detect the issue earlier and whether they had taken a gamble to protect pole.

“I am surprised because they checked the gearbox,” said Mercedes boss Toto Wolff.

“It's also a shame because he's Monegasque, people are cheering for him and he deserved it (pole) because his lap was spectacular.”

Mercedes' championship leader Lewis Hamilton, who is 14 points clear of Verstappen after four rounds, moved up to sixth on the grid from seventh.

Lewis Hamilton's comments about Formula One rival Max Verstappen suggest the Dutch driver is beginning to get to the seven-times world champion, Red ...
Motoring
4 months ago

Alpine are keen to extend the contract of French driver Esteban Ocon to keep their line-up unchanged next year, the Renault-owned Formula One team's ...
Motoring
4 months ago